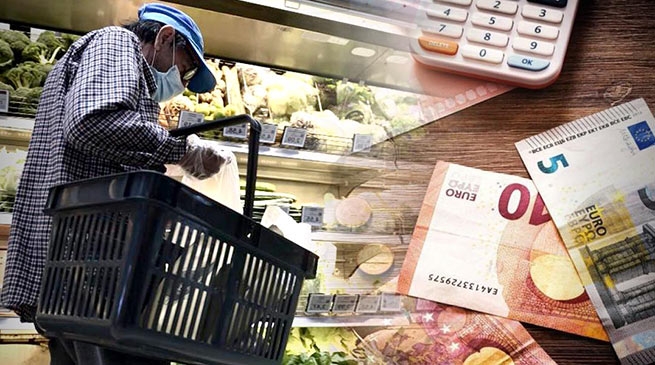 The loss of purchasing power of households with a monthly income of less than 750 euros is up to 40%, this is one of the main findings of the Bulletin of Economic Trends of the Labor Institute GSEE.

There is also an exacerbation of economic inequality in society due to the cost of living associated with the energy crisis and inflation. And in the face of this social and economic devastation, the government chooses to respond… with the “Family Basket”, aptly dubbed the “poor man’s basket”, where it is considered a great achievement for supermarkets to include private label #6 pasta in the “basket” to Adonis and the Mitsotakis government could joyfully report to the people about helping the population.

But citizens do not see the difference, but see their wallets empty, and it is no coincidence that the answer to the question of how the Greeks perceived the premiere of the government’s communication trick with the “poor man’s basket” was briefly and succinctly given by an older man, when asked, “how he sees food prices”: “@rhi@dj@ mal@k@”…

As you can see, people who have lost 40% of their purchasing power in a year due to inflation and cannot make ends meet will not join any political show of people who earn thousands of euros a month and do not face a drop in living standards. , this is evidenced by surveys of research centers.

Bulletin of economic events ΙΝΕ-ΓΣΕΕentitled “Cost of Living Crisis in Greece”, captures the development of price inflation in our country and reflects the aggravation of economic inequality, the decrease in the purchasing power of workers and the impact on the standard of living of households. At the same time, the study supports a number of necessary measures aimed at protecting the purchasing power of employees and the most vulnerable social groups.

Sharp rise in prices and falling purchasing power
The report concludes that the sharp rise in energy and commodity prices has a significant impact on the purchasing power of employees and their standard of living. The loss in purchasing power of the minimum wage in Greece is about 19%but, as the report notes, given that the minimum wage in Greece is below a decent living level, it is clear that rising prices have reduced the standard of living of employees and their families.

As a consequence, living conditions are worse for those who work in informal employment, due to the disproportionate impact of accuracy on low incomes. Another negative consequence of the decline in purchasing power is also the impact on the dynamics of consumption and growth, while the Greek economy is entering a period of weakening of the key endogenous factor that determines its stability and dynamism.

The situation is especially dramatic for people with low and very low incomes. As can be seen, the combination of rising prices, mainly for basic commodities such as energy and food, and very low incomes results in a loss in the purchasing power of households with a monthly income of less than 750 euros of up to 1.5 billion euros up to 40%.

The next income group (€751-€1100) also experiences large losses in purchasing power, ranging from 9% to 14%, although significantly less than the poorest income group, although average consumption is much higher.

The above figures also show growing economic disparities due to uneven pressure on the poorer segments of the population. The situation is aggravated by the fall in average wages, both in nominal and real terms. According to INE-GSEE, in the first quarter of 2022, the nominal average wage decreased by about 4.5%, while the decline in real average wage reached 12%. The decline in average wages weakens the propensity of society to consume and highlights the low level of labor protection by collective labor agreements and the deterioration in the well-being of workers. The data also show significant differences in spending patterns between households depending on whether the goods and services they consume are basic necessities.

Energy consumption
For both domestic and non-domestic consumers, Greece recorded the highest EU pre-tax prices. The post-fiscal price remains high for non-household consumers. The high price of energy in Greece is largely due to the market characteristics of the Greek Energy Exchange and the importance of gas in determining the final price of energy, as well as very high intermediate costs.