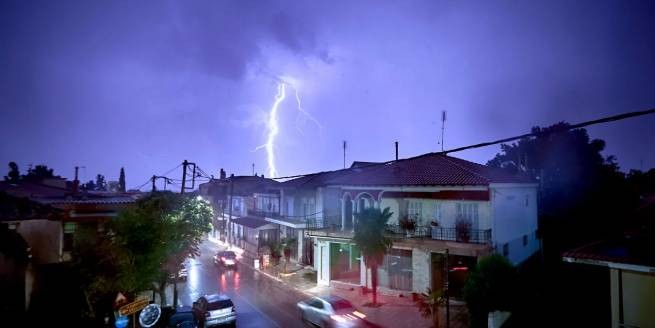 Cyclone Eva, currently in northwestern Italy, is rapidly moving southeast and will cause severe weather in Greece from Friday to Saturday night, according to the national weather service EMY.

From Saturday morning (05-11-2022) until Sunday evening hours (06-11-2022), dangerous weather phenomena will be observed in Greece, the main characteristics of which will be high rainfall, storm winds and high lightning frequency.

EMY notes that the phenomena will especially intense in some places in western and central Macedonia, eastern Thessaly and the Sporades.

The Greek Rescue Service asks to limit travel during heavy rains and thunderstorms, in order to avoid getting into a difficult situation. Meteorologists from the National Observatory of Athens spoke about a cyclone that will bring bad weather to Greece.

Cyclone “Eva”: pthe weather changes from friday
Generally clear weather with scattered clouds in the west and north. From the second half of the day, the clouds in the northwest will become denser, local showers will pass, which will intensify during the night. Visibility in the morning hours will be locally limited, fog will form in places. The wind in the west will blow from the south from 3 to 5 and gradually in the Ionian Sea locally up to 6 Beaufort, and in the east it will be variable from 3 to 4 Beaufort, which will gradually change to south / southwest up to 5 points.

The temperature will drop slightly, its maximum value will reach 22-24°C, and in some places on the mainland 25-26°C.

Local showers and occasional thunderstorms on Saturday
At first in the west and gradually over the rest of the continent an increase in cloudiness, with local rains and occasional thunderstorms in the west and in the evening in the north. The rest of the country has thin clouds that will gradually become denser. The wind will blow from the south from 4 to 6 and locally at sea 7 on the Beaufort scale. The temperature will not change significantly.

Downpours on Sunday
Across the country increased cloudiness with showers and occasional severe thunderstorms in the west, north and possibly center. In the evening, the phenomena in the west will weaken. The wind will blow from the south 5-6 and locally into the Beaufort Sea 7. Gradually in the Ionian Sea they will turn into western/north-western 5-6 points. The temperature will drop.

Weather forecast for Monday
In the east and south of the island country, an increase in cloudiness with showers and thunderstorms, strong in places. The rest of the country will experience unstable, partly cloudy weather, local showers and occasional thunderstorms.

Wind west, north-northwest from 4 to 5 Beaufort. In the east of the south direction from 5 to 7, which will gradually move from the north to the north-northeast with the same intensity. The temperature will not change significantly.

Forecast for Tuesday
Unstable weather with partly cloudy, localized showers and occasional thunderstorms predominantly in the west and south. The wind will blow from the north 4-5, and in the Aegean Sea locally 6-7 points. The temperature will not change significantly.

Why November is considered a weather-dangerous month in Greece

If we turn to books on climatology and meteorology, we will see that November is represented as statistically most dangerous month in terms of weather events. The simple explanation we could give is that the atmospheric circulation is starting to change, and colder air masses are descending from the north further south. But the journey of these colder gaseous masses is not easy, as they also interact with the Earth’s surface. So on their way they will meet seas, lakes and oceans, and it is here that one of the foundations of this phenomenon is hidden. The reason is that areas with a lot of water (seas, oceans, rivers, large reservoirs) heat up and cool down more slowly than land. In this case, they have retained heat from the hot days of the previous summer months, and because of this, there are areas of low pressure above them.
When colliding with cold air masses moving from the north (since the land cools much faster), active weather phenomena occur that can turn into cyclones and tropical storms.