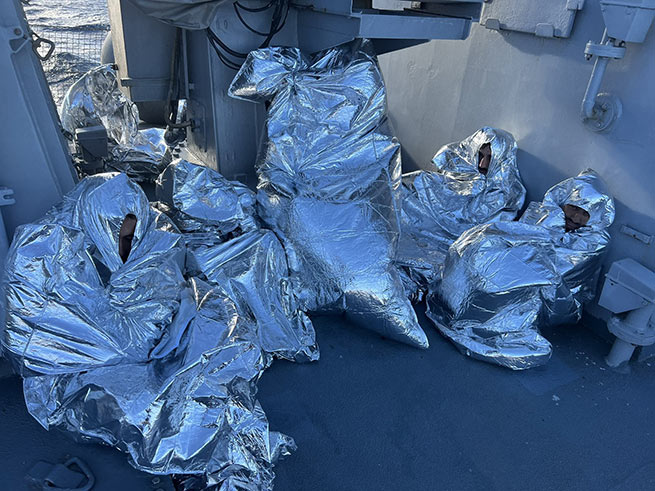 Number of confirmed dead as a result of a shipwreck with migrants that occurred in the Kafirea Strait (between Evia and Andros), increased to 20 people as recently a Coast Guard boat retrieved three more bodies from the sea.

A total of 20 bodies were recovered from the water, 12 people were rescued, including a 16-year-old minor who is being treated at a hospital in the city of Karystos.

The Coast Guard, coordinated by EKSED, is conducting a search and rescue operation in the Kafirea Strait (between Evia and Andros), after a boat with immigrants sank in the area.

According to an official statement from the Coast Guard, in the early hours of November 1, migrants called emergency number 112 to report that they were in danger, without specifying their exact location.

A Coast Guard search and rescue operation followed. After a long search, a Coast Guard patrol boat located and removed 9 people (Afghans and Iranians) at about 7 am from the rocky island of Mandilos in the Kafirea Strait. It should be noted that when they were discovered, none of the rescued had life-saving equipment (life jackets).

Rescued aboard a Coast Guard ship.

Rescuers reported that they were on board a sailboat that sank north of the island, carrying 68 people.

At this time, searches are underway for the rest of the passengers of the sunken ship. The operation involves a Coast Guard patrol ship and helicopter, as well as two commercial ships in the area.

It is noted that at the time of the shipwreck, the weather conditions in the area of ​​the Kafirea Strait were extremely unfavorable, with northerly winds of the order of 7 and 8 Beaufort and gusts up to 9 Beaufort.

According to information, the ship left the Turkish city of Smyrna (Izmir) on Sunday.

Speaking to the media on Nov. 1 about the ongoing search operation involving floating and airborne search engines, Nikos Kokkalas, spokesman for the Coast Guard, said it was a very difficult rescue operation due to bad weather conditions.

“We rescued 9 people from the stone island. Rescuers were taken by boat to Karystos for first aid. According to them, women and children were also on the sunken sailboat. Hopes of finding the remaining 59 passengers safe are unlikely. This is the third major shipwreck we’ve seen in a month,” Kokkalas said.

The search and rescue operation of the port corps in the sea area continues.