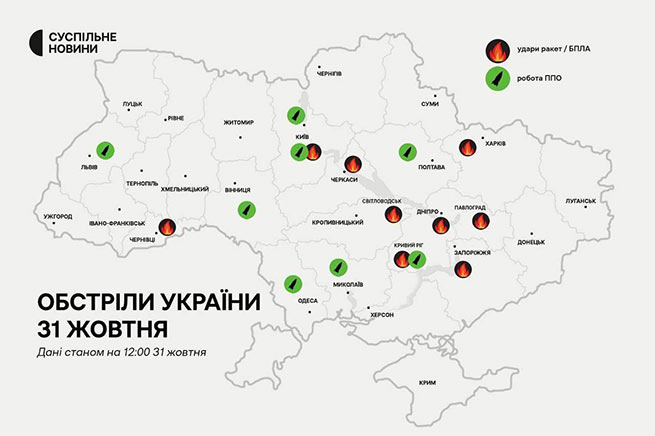 Russia this morning again launched a missile attack on the Ukrainian energy infrastructure in the largest Ukrainian cities. According to Ukraine, 50 missiles were fired, 44 were shot down, 18 objects were hit in 10 regions.

The doctrine of Russian General S. Surovikin continues to be applied, the goal of which is the complete destruction of the Ukrainian energy infrastructure in order to disrupt the functioning of the Ukrainian army in the middle of winter and make it difficult for the authorities in Kyiv to cope with the cold winter.

According to Reuters, there were at least 10 explosions. According to AFP journalists, five explosions sounded in the Ukrainian capital from 08:00 to 08:20. According to Mayor Vitali Klitschko, some areas were left without electricity and water due to shelling.

In Kyiv, according to the new schedule on the Yasno website, the power will be turned off 3 times a day. Actual schedule here. Shutdown schedules may not be maintained until the situation stabilizes, according to Yasno.

Vitaliy Klichko: “Part of Kyiv without electricity, also 80% of the city without water supply. From the good news: all the missiles flying to Kyiv were destroyed. Explosions were in the suburbs of Kyiv. Part of the capital is de-energized due to PSO strikes against critical infrastructure.”

Video queue for water in Kyiv.

The situation is moving towards a complete shutdown of electricity throughout Ukraine.

I am celebrating one of the scariest Mondays (October 31, 2022💔) Ukrainians are experiencing today! Zranka orcs began attacking the whole of Ukraine with their missiles, destroying our energy infrastructure #Kiev #Odessa #Mykolaiv #Kherson #Zaporizhzhia #UkraineRussiaWar pic.twitter.com/ySDdTIDN03

Russian and Ukrainian sources report rocket attacks on power plants. Until now, Kyiv has announced periodic power outages in various cities of Ukraine, but after today’s strikes, the situation will worsen even more. At a time when the air temperature drops, the situation will become more difficult for the inhabitants of Ukraine, who will have to deal, among other things, with cold and lack of water and electricity, which will cause a number of serious problems.

The Armed Forces of Ukraine announced the destruction of 44 out of 50 missiles launched in Ukraine.

The profile publication Elektrovesti states that today missile strikes were carried out on the Dnieper, Dniester and Kremenchug hydroelectric power stations. Local authorities confirm strikes on targets in these areas, but do not specify whether it is a hydroelectric power plant. It should be noted that, judging by the information about the strikes, they occurred (in addition to the three HPPs mentioned above) also in the Kanev region in the Cherkasy region (where the Kanevskaya HPP is located), as well as in the Vyshgorod region (where the Kyiv HPP is located). If these objects are also hit, then it turns out that the Russians struck at the entire Dnieper cascade of hydroelectric power stations, except for Kakhovskaya and Srednedneprovskaya. At the same time, the Prime Minister of Ukraine announced the defeat of 18 objects in 10 regions. Thus, according to official Ukrainian statements, 6 missiles were able to hit 18 targets (3 per target) in 10 regions.

Donetsk was traditionally shelled by the Armed Forces of Ukraine (the city has been shelled almost daily since the beginning of the war. Until February 24, the most intense shelling was in 2014-2016).