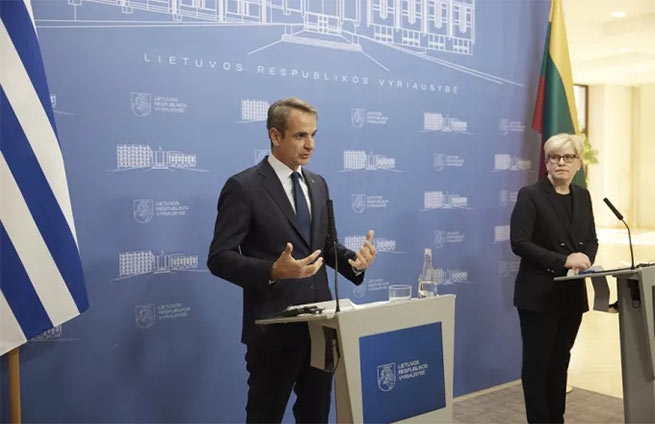 Greek Prime Minister Kyriakos Mitsotakis criticized Turkey for sticking to the golden mean regarding Russia’s war in Ukraine, while avoiding the question of journalists about the trial of Russia over war crimes.

“[Анкара] believes that she does not need to choose sides, as if there is no right or wrong,” Mitsotakis said after meeting with his Lithuanian counterpart Ingrid Simonyte in Vilnius on Monday.

Mitsotakis also accused Turkey of undermining stability and security in the region, adding that there was no room for new sources of tension, especially between the two NATO allies. “Greece always keeps the window open for dialogue, but keeps the door closed for provocations and threats to its territorial integrity,” he said. Prime Minister Mitsotakis confirmedthat Greece will continue to support the territorial integrity of Ukraine.

“Of course, we also discussed Russia’s blatant invasion of Ukraine in violation, in total disregard for it, of the UN Charter based on the rules of international order. And we reaffirmed our commitment, together with Ukraine, along with the rest of our European partners and all of our NATO allies, except one, to resist this attack.

We discussed in detail the latest developments in Ukraine, as well as the next steps we need to take. We once again condemned in the strongest possible terms the recent indiscriminate Russian missile and drone attacks on Ukrainian cities that have resulted in the death of innocent civilians and the destruction of critical infrastructure, and we continue to fully support the independence, sovereignty and territorial integrity of Ukraine. We will support Ukraine for as long as necessary, and we will continue to provide not only political, but also economic, military and humanitarian assistance to the Ukrainian people.

I also had the opportunity to brief the Prime Minister on the situation in the Eastern Mediterranean and the ongoing tension that Turkey is causing in the Aegean, both through its actions and the rising rhetoric, which, unfortunately, is undermining stability and security in the region as a whole. I believe that here again we see an example of how revisionist rhetoric can undermine regional stability at a time when the last thing we need is another source of tension in the Eastern Mediterranean, especially between two NATO allies.

As I have repeatedly emphasized, Greece, Madam Prime Minister, always keeps the window open for dialogue, but firmly keeps the door closed to challenges and threats, especially when they concern our national sovereignty. And unfortunately, when it comes to Russia’s aggressive war against Ukraine, Turkey does not see the need to choose sides, as if there is no right or wrong.

Turkey considers it acceptable to supply weapons to Ukraine, serving the economic interests of Russia and ignoring sanctions EU. I think we must ensure in the Council of Europe that we invite all countries, especially those that aspire – even in words – to become members of the European family, to join the decisions we have taken. As we have said, sanctions have an effect, they are taking a heavy toll on the Russian economy, and the more we put pressure on those countries that make it easier for Russia to circumvent sanctions, the more effective the sanctions we have imposed.

As the Prime Minister said, we also discussed the most complex and difficult issue – the instrumentalization of energy in Russia, especially the very high prices for natural gas. I am very pleased that we have worked closely with Lithuania, both at our level (heads of state and government) and at the level of our energy ministers, to find concrete and clear solutions that will help us reduce the price of electricity and natural gas to an acceptable level.

I hope that these measures will be agreed at the level of energy ministers to ease the pressure we all face in supporting businesses and households from our budget. We all do it. We all spend a significant amount of money, a significant percentage of our GDP, to provide support. But, in my opinion, a European solution is long overdue.

And indeed, the time has come to send a very clear signal to both Russia and the markets that speculation in the natural gas market will be dealt with in a unified manner by the European Union, by setting some kind of cap on the TTF index, as we have discussed in detail so far, even at our own level. at the level of heads of state and government.

Last but not least, both Lithuania and Greece face the same challenges when it comes to using immigrants to exert political pressure on our countries. We have very good and close cooperation in the field of immigration, and I think we should always say that we cannot, in principle, accept the fact that some people use desperate people for political purposes.

Greece will continue to defend its borders, which are also the borders of the European Union. We are always ready to provide humanitarian assistance to people, especially those whose lives are in danger at sea. And we will always call on our neighbors, especially Turkey, for constructive cooperation in solving this problem. And in that regard, I think we have a lot in common when it comes to developing our approach to border management and security. Madam Prime Minister, thank you again for the warm welcome in Vilnius“.

Journalist: Mr. Prime Minister, you mentioned the relationship between Turkey and Russia, and I would like to ask a question about the initiative of the Baltic States to create a special court for Russian aggression in Ukraine. Do you support this proposal?

Kyriakos Mitsotakis: If war crimes are being committed and there is sufficient evidence that this is happening, I would argue that those who committed these crimes should be held accountable. I think this is a position that I think all the members of the European Council agree on, and this is also the reason why this issue is mentioned in the conclusions of the European Council.

Journalist: But do you support this institution, a special court?

Kyriakos Mitsotakis: Basically, this is what we are studying and, as I said, we want to ensure that those who committed war crimes are held accountable…