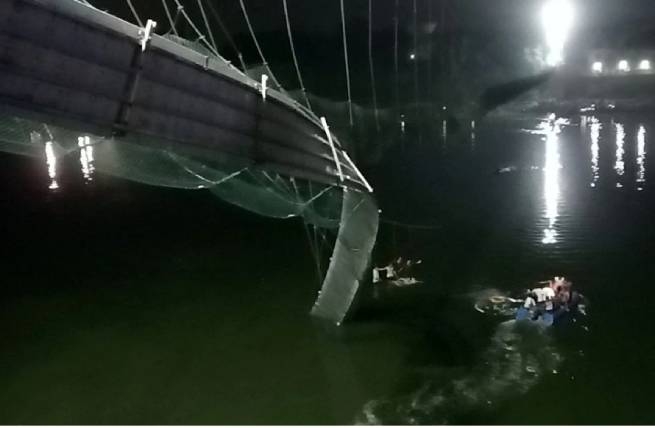 At least 130 people died as a result of the collapse of a pedestrian bridge across the Machkha River in the city of Morbi. The incident took place in the western Indian state of Gujarat.

According to Reuters, more than 150 people were on the suspension bridge across the river at the time of the collapse. MP Mohan Kundaria says: “So far 60 deaths have been confirmed.”

According to other data presented later, as reported by euronews, at least 90 people died, at the time of the tragedy there were about 500 pedestrians on the cable-stayed bridge. Most of them fell into the water. One of the versions – the collapse occurred precisely because the structure could not withstand the weight of those gathered.

Television footage shows dozens of people clinging to cables and the twisted remains of a collapsed bridge as rescuers try to help them. Some have climbed the broken structure to try to reach the shore, others swim to safety.

The 230m historic bridge was built during British rule in the 19th century. For six months it was closed for repairs and only last week reopened to visitors.

“Reconstruction was carried out last week. We are also in shock. We are looking into this matter,” local news minister Briesh Merja was quoted as saying by local television news channel NDTV. “The government takes responsibility for this tragedy.”

The tragic incident occurred on the eve of elections in Gujarat, they should be held before the end of the year. Prime Minister Narendra Modi’s ruling party’s term expires in February 2023.

The prime minister, who is in his home state of Gujarat on a three-day visit, said he had instructed the state’s chief minister to urgently mobilize teams for the rescue operation.

As of 3:15 pm on October 31, the death toll from the bridge collapse in India has risen to 120, police said. Later mass media reported 132 dead, including women and children. About 177 people were rescued and officials said rescue operations continued throughout the night.