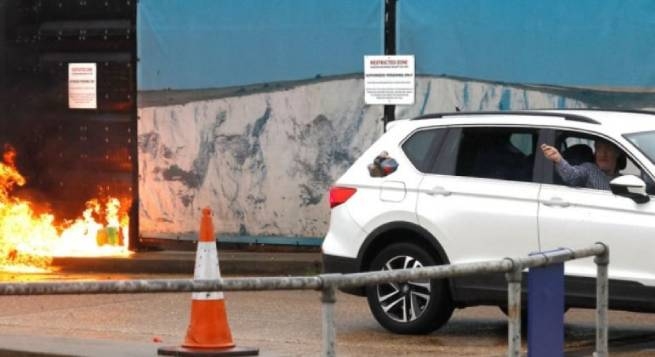 Amid discussions about Britain’s migration policy, a man attacked a migrant center in Dover and then committed suicide.

On Sunday, he threw firebombs with fireworks at a migrant processing center in the southern English port of Dover before committing suicide, reports Reuters. A white man in a plaid shirt, around 11:20 GMT, drove up to the center in a white SEAT SUV. After getting out of the car, he threw three incendiary bombs, one of which did not explode. After that, the man went to the nearest gas station, attached a rope with a noose tied around his neck to a metal pole, and pressed the gas of the car, thus committing suicide. A statement from the Kent police said:

“Officers determined that two to three incendiary devices were thrown at the immigration premises of the Department of the Interior.”

Law enforcement officers are investigating an attack on a migrant center in the city of Dover. The Kent County police, where Dover is located, confirmed the incident and reported a minor injury to one person: “The suspect has been identified and located. The investigation into the incident continues.”

It is noteworthy that the attack on the immigration center took place in the midst of a discussion about British policy in this area. In recent weeks, the number of people trying to cross the English Channel into British territory has skyrocketed. Only on Saturday from France to Britain arrived about a thousand migrants.

The British government has been criticized for being too lax in its border controls, while at the same time being accused of inhumane treatment of migrants.