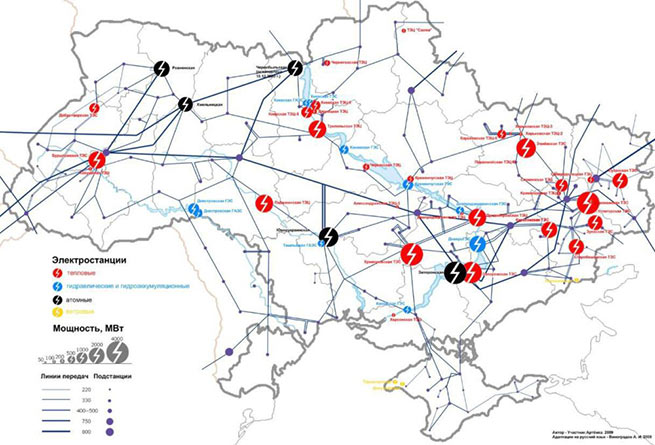 Attacks on the energy infrastructure of Ukraine reached a new level, losses amount to a third of all electricity generation. How will this affect the electricity situation in the country?

The main share of generation in Ukraine is provided by nuclear power plants and coal-fired thermal power plants. These stations provide a consumption base of approximately 9 GW (~6 + ~3 GW respectively). At the same time, Ukraine’s consumption now fluctuates between 10.5-12 GW. The rest of the power is compensated by gas thermal power plants and hydroelectric power plants. At the same time, HPPs are used primarily to cover peak loads and compensate for generation losses after missile strikes. So, if before October 10, when the first blow to the energy system occurred, the generation of HPPs rarely exceeded 0.8 GW, then on the 11th, generation through HPPs doubled to 1.32 GW.

At the moment, damage is reported to the Dniester (0.7 GW), Kremenchug (0.7 GW) and Dnieper (1.5 GW) HPPs. Yes, they did not operate at full capacity, so it is too early to talk about the loss of 3 GW of generation. But even 1 GW for today’s Ukraine is a huge power. Do not forget that damage to the outdoor switchgear of a hydroelectric power plant affects the overall connectivity of the power system.

Today’s strike, which also affected the distribution facilities of the Dnieper hydroelectric power station, deprives Ukrainian power engineers of room for maneuver. They will not be able to compensate for the loss of generation at the expense of their largest hydroelectric power station. The only reasonable solution would be to maximize the use of coal and gas thermal power plants, but this can be prevented by both the eternal shortage of fuel and the continued strikes of the RF Armed Forces. Moreover, specifically the Dnieper HPP helped to stop the energy shortage in the Kyiv region and transfer excess power to the east of the country.

The impact on the Dnieper hydroelectric power station in terms of its real effect is comparable to attacks on high-voltage substations of 750 kW and 330 kW.

Analysis of strikes on the infrastructure of Ukraine (Version Readovka).

In recent days, a lot of speculation has been circulating on the net regarding the effectiveness of the influence of the RF Armed Forces on the strategic infrastructure of Ukraine. TG channel Readovka offers an analysis of the situation from a professional power engineer.

PS control the voltage in the network. High voltage networks are used to transmit electricity “much and far” (in Ukraine, 750 kV and 330 kV networks are used).
The switchgear provides a change in the transmission scheme in case of any accident. Power lines are literally wires through which current flows. Breaking them off is easy enough, but they are also restored relatively quickly. What can not be said about PS and ORU.

The energy system resembles a web that covers the entire country, and several “threads” approach Kyiv at once, in order to de-energize it for a long time, complete isolation from the “threads” coming from other regions is necessary, as well as the decommissioning of most nearby power plants. If the substation is destroyed, then Ukrainian power engineers will not be able to supply the necessary voltage to the network. If the outdoor switchgear is damaged, then they will not be able to maneuver the resources of the remaining networks and stop the destruction of part of the PS.

At the moment, the basis of electricity generation in Ukraine is nuclear power plants, which cannot work “idle” without load, otherwise it will need to be shut down. Restarting a nuclear power plant is neither a trivial nor a quick task. At the same time, the load to the Ukrainian NPPs is connected just through the previously mentioned networks of 750 kV and 330 kV, that is, the substations and switchgears of these networks are the most obvious and critical targets for causing maximum damage to the Ukrainian infrastructure.

The key element of the energy system of Ukraine is the main networks of 750 kV and 330 kV and their transformer substations (SS) and open switchgear (ORG).

And now let’s try to evaluate the effectiveness of the last strikes from a technical point of view.

Undoubtedly, effective strikes are regularly inflicted on the energy system of Ukraine, information is confirmed about the defeat of power plants, substations and outdoor switchgears (both on the main and on local networks). Kyiv daily reports blackouts of entire districts and regions. Everything is true, but usually after a few hours the power supply is restored, consumers are simply fed from other power plants.

Damage to single substations, outdoor switchgear and even power plants will not affect the energy system as a whole, because it is deliberately designed to ensure maximum stability. Even in peacetime, from time to time some of the elements are turned off for maintenance or in connection with an accident. Long-term blackouts in peacetime occur extremely rarely and usually in rather remote regions where the connectivity of the power system is rather low.

Yes, sooner or later, while maintaining the current pace and format of strikes, the Ukrainian energy system will not survive, but it may well be weeks or even months. Apparently, a fundamental decision to plunge Ukraine into the Middle Ages has not yet been made, and everything that we see now is just a demonstration of the possibility of such a scenario.

To inflict maximum damage, it is necessary to inflict massive strikes not on the entire territory of Ukraine, but on specific regions, in order to isolate entire regions from the rest of the energy system. Otherwise, Ukrainians will face only local difficulties and inconveniences in the form of a power outage for several hours.

There is no need to talk about any complete and long-term blackout yet.