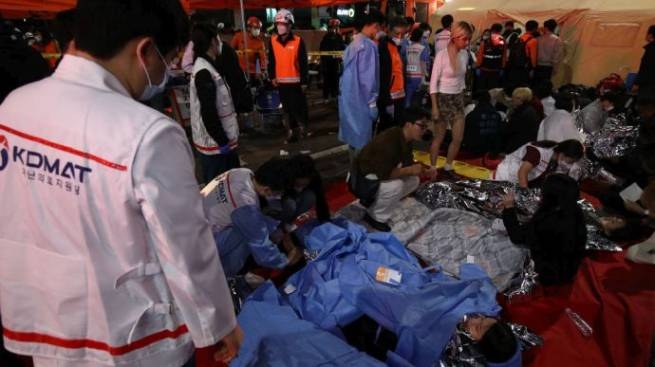 The confirmed death toll in the Seoul stampede has risen to 151. Authorities have also received more than 350 missing persons reports. Among the victims are 19 foreigners. The country is in mourning.

According to Reuters, referring to the head of the Yongsan fire station, Choi Sung-bum, the victims of the incident were mostly young people under the age of 20 years. 151 deaths confirmed, including 19 foreign citizens – from China, Iran, Uzbekistan and Norway. RIA Newswith reference to Russian embassy in Seoul, reported the death of two women from the Russian Federation, another is in the hospital. Later it became known that she had died, the embassy said:

“Only three citizens of the Russian Federation died. The last one who died was the one who was considered injured. Her relatives found her. She died in the hospital.”

Choi Sung Bum said at a briefing that 82 people were injured at the scene, 19 of them seriously. South Korean President Yoon Seok-yeol declared national mourning on Sunday and wished a speedy recovery to the injured.

This Halloween celebration has become the largest in recent years, after the easing of restrictions due to COVID-19. Approximately 100,000 people took to the streets of the popular Itaewon area. There was a stampede while trying to get ahead in a narrow alley near the Hamilton Hotel, Seoul’s main party venue. Witnesses say the crowd became more unruly and agitated as darkness fell. Chaos erupted shortly before the stampede began at 22:20 (13:20 GMT), in the presence of the police, who periodically tried to control the crowd.

The crush began in a narrow place at about 22.22 on Saturday. The alley, which opens onto a wider street, is different in that the road goes down there, narrowing, and the surface is uneven. Therefore, people could easily stumble and fall due to the pressure of the crowd. According to the JTBC TV channel, which cited anonymous sources, despite the stampede, people continued to accumulate in that narrow alley, because they did not know about the incident or ignored this fact. Itaewon is known for hosting a large number of Halloween parties.

Moon Ju Young, 21, told Reuters that even before the incident, there were clear signs of trouble ahead in the alley – there were 10 times more people than usual.

Footage from social media shows hundreds of people stranded in a narrow, sloping alleyway crushed and immobile as emergency personnel and police try to free them.

President Yong held an emergency meeting with senior aides and ordered the creation of a task force to provide resources to treat the wounded and begin a thorough investigation into the causes of the disaster. It became one of the deadliest in the country after the Sewol ferry sank in 2014, killing 304 high school students. The tragic incident sparked a widespread reassessment of security arrangements in the country at the time. It is likely that tough measures will be resumed after Saturday’s stampede.

The site of the tragedy was visited by South Korean President Yoon Sok-yeol. Before that, in an address to the citizens of the country, he declared national mourning “until the situation is completely resolved”, expressed condolences to the victims and the families of the victims, promised to investigate the causes of the incident and take measures for the future.