It is possible that ahead is a record-breaking warm winter. This forecast is given by the German and European meteorological services. And in Greece?

Forecasters assure that winter in Europe will be too warm. However, no reputable meteorological service expects the winter to be too cold. So if in the near future you again have to read something about the upcoming icy winter of the century, you should just forget about it!

Since the end of September, rumors about the cold winter of 2022-2023 have been actively circulating. Meteorologists compared the weather with past decades and gave a forecast. The German National Oceanic and Atmospheric Administration (NOAA) has already reported that the upcoming winter will be warm. As writes Daswetter, mild weather and precipitation are expected for several months, and only one month of winter 2022/2023 may be cool.

Forecasters categorically refute rumors of an icy winter, which has not happened for decades. October and November in Germany, in terms of global warming, are expected to be very warm – temperatures will be at the level of 20°C.

December will also be warm and rainy, the German weather service promises. Record heat levels are expected over the past 30 years, from 1992 to 2022. According to NOAA, a similar forecast applies to January-February – the average temperature will be two degrees higher than in the last 7 years. In general, the upcoming winter will be 2 degrees warmer than in recent decades.

And what about in Greece? Meteorologists are not so optimistic. In Thessalonikifor example, the weather in winter 2022-2023 predicted stable, cold, with a deficit of precipitation. The average temperature of the season is expected to be 1°C lower than in the 2021-2022 season and will be 7°C. On average, about 23 days of precipitation are expected per season, with the most falling in December. A typical winter starts on December 1st, with temperatures dropping to 7°C.

December 2022 will be a typical winter month. Forecasters predict an average temperature of about 8°C, which is 1°C higher than the historical mark over the past 10 years.

January 2023 it will be a little colder. The average temperature is expected to be around 7°C. By the end of the month the air temperature may rise up to 6°C.

February expected to be cool. From February 1st to February 10th, 2023, temperatures are expected to average around 8°C. By the end of the month the temperature will drop and the thermometers will show 6°C.

In Athens current winter season promises to be cold and dry. A calm climate is expected, with a low temperature background and the absence of a large amount of precipitation. From the second half of the season, the region will begin to get colder. The average temperature will be 8°C, lower than last season. Maximum monthly temperatures: December – 19°C, January – 15°C, February – 16°C, minimum: 4°C, 0°C, 1°C. The number of days with precipitation in the season is at least 9 days.

Compared to usual averages of around 12°C for December, the month will be atypical. The average daily temperature will be around 10°C. Precipitation will be moderate, mainly falling on the period from 8 to 9 December.

According to weather forecasts, the second half of winter will be colder than the average seasonal indicator as a whole. Temperature regime in January will stay around 7°C. Temperatures of up to 8°C are forecast by the end of the month. Precipitation is expected to be moderate.

For February 2023 will not be characterized by weather variability. Temperatures will fluctuate between 1°C and 9°C at times. At the same time, the average temperature of the month will be 7°C, gradually increasing towards the end of the month. 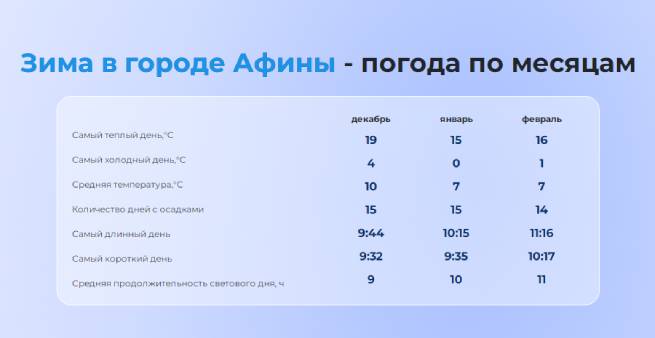