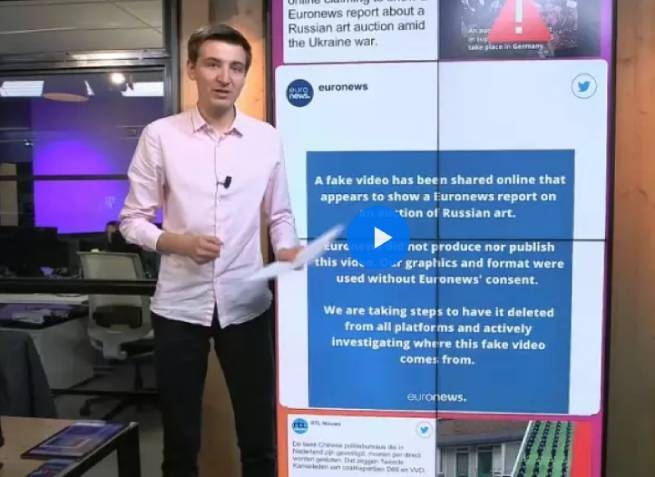 A Euronews report appeared on the net about a unique auction of Russian art works – paintings, manuscripts, antiques – with their subsequent destruction.

However, the channel has nothing to do with it. The fake video tells that an auction house in Germany asked the owners of private collections to donate their manuscripts by composers or paintings by Russian artists. The proceeds from them will go to help the Ukrainian army, and the works of art will be publicly destroyed.

Euronews states that despite the use of the channel’s logo and graphics in the video, it has nothing to do with this video:

“We did not create or publish this video. The video format and graphics were used without our consent. We are taking steps to remove it from all platforms.”

The authors of the so-called “self-proclaimed content” present a fake report, posing as a real news agency and spreading deliberately false information. No less than the Euronews channel, the German auction house Bolland & Marotz is also outraged, which also speaks of a “fake”. His statement says:

“There is no such auction and there never will be. We are outraged and stunned that our name is being used illegally. Much worse, this video offends everyone associated with Russian Orthodox culture. This is contrary to our philosophy and our work to preserve works of art. Since the beginning of the Russian invasion of Ukraine, a number of European countries have canceled performances or events with the participation of Russian artists, but no one is going to hold such an auction to destroy Russian antiques.”