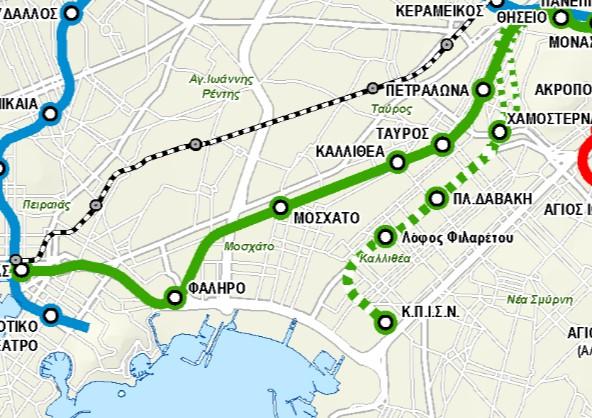 The Minister of Infrastructure and Transport Kostas Karamanlis spoke about the new expansion of the metro in Athens a few days ago.

One of them is the creation of a subway line 1 (Green) branch from Thissio station to Faliro via Kalithea, in order to improve accessibility to the Stavros Niarchos Foundation Cultural Center (ΚΠΙΣΝ, SNFCC).

According to the Attiko Metro project, the new line will be about 3.5 km long, starting at Thisios station and ending at SNFCC. Intermediate stations will be located on Tesei Avenue, Hamosternas Square, Davaki Square and Lofo Filareto/Jizifes. The line will serve about 65,000 passengers daily.

The project has a budget of around 450 million euros, with the ministry prioritizing this expansion by funding the necessary research. The reason the new interchange is high on the ministry’s agenda is the urgent need to connect public transport to ΚΠΙΣΝ, which is estimated to receive around 20,000,000 visitors a year.

It is noted that in the future it is assumed that Line 1 will also cross Syngrou Avenue and reach Paleo Faliro, but this project is not a priority.