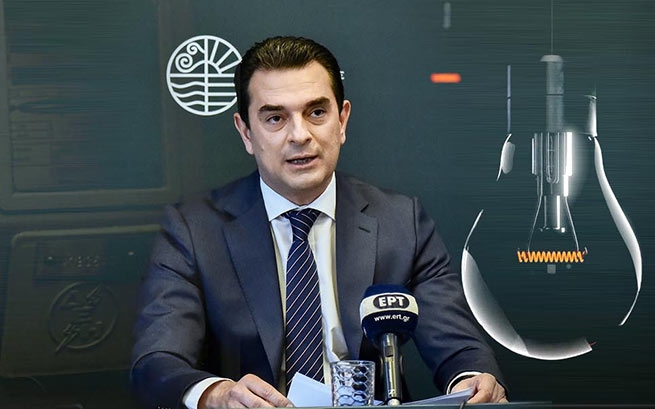 The government of K. Mitsotakis, through the mouth of the Minister of Energy K. Skrekas, recommended avoiding the use of energy-consuming appliances from 6 to 9 pm!

Only now the authorities did not take into account that the hours from 18 to 21 hours are the time during which the Greeks perform all their activities related to cooking, washing, heating, lighting, etc., since the rest of the time they work and are outside the house. In essence, the government requires Greeks to live in their homes as “invisibles” and not consume electricity. And since nothing in life can be done by recommendation, but only by coercion and order, the government, in order for the Greeks to obey and not “burn” electricity, introduces a hidden “fee” for consumption.

A new consumption levy is being introduced as part of the utility charge (ΥΚΩ), this time to fund “energy crisis risk offsets” for households. While the government, both domestically and internationally, extols the massive subsidies it generously provides to Greek households and beyond, they are ultimately subsidized at the expense of consumers’ own money, both indirectly and directly.

The surplus of the special utility account (ΕΛΥΚΩ) has been financing energy subsidies for months, so the expected benefit of connecting the islands to the mainland system electrically to lower related utility bills, promised by the New Democracy government when it cut the ribbons on the connected islands, has been undone in practice.

As announced in August and provided for by the corresponding amendment submitted the day before yesterday by the Ministry of the Environment, consumers will not only not be relieved by the reduction in ΥΠΕΝ, but a new sub-category of support will be created, funded, of course, again by consumers. From now on, “compensation for the risk of energy crises is a public service”, and the costs of providing this service are distributed throughout Greece among each category of consumers, including car manufacturers. At the same time, the fee included in the utility bills is adjusted by a horizontal increase per kilowatt-hour of consumption, starting from November 1, by decision of the Ministry of the Environment after the conclusion RAE.

During the summer heat wave of August, Minister PEN announced a “permanent compensation mechanism to be fueled by a new reserve account” through fees for ΕΛΥΚΩ and is estimated to bring in about 300 million a year.

So, for example, if you consume 1500 kWh over a four-month period, the household will pay 25.5 euros only for ΥΚΩ, compared to 10.35 euros today. At the same time, at this level there will be a surcharge for higher consumption (0.050 euros up to 1601-2000 kilowatt-hours and 0.085 euros from 2001 kilowatt-hours and above), which the minister called “rationalization”(Pay attention to this if you heat the apartment with electric heaters or air conditioning. Editor’s note).

Meanwhile, since September fee has increased and for the power transmission system (ΑΔΜΗΕ), which is 0.00844 euros/kWh for households compared to 0.0056, which corresponds to 12.66 euros for a four-month consumption of 1500 kWh, compared to 8.4 euros (+50.7%) . In other words, general additional fee (ΥΚΩ+ transmission network) for this consumption approaches 19.5 euros.

Energy minister Kostas Skrekas announced the electricity subsidies, which will come into effect in November. Greece is a leading player in the fight against the energy crisis, stressed Kostas Skrekas, starting his statements by saying that the proposals of Kyriakos Mitsotakis now find supporters in the European Union. With regard to subsidies for electricity, he announced – dFor all primary and non-primary residential utilities, without income criteria and regardless of service providers:

Also, ΔΕΠΑ will provide a subsidy of 25 euros per thermal megawatt-hour for all residential consumers, it covers 700,000 consumers, regardless of income and suppliers.

In particular, the following rates are announced: