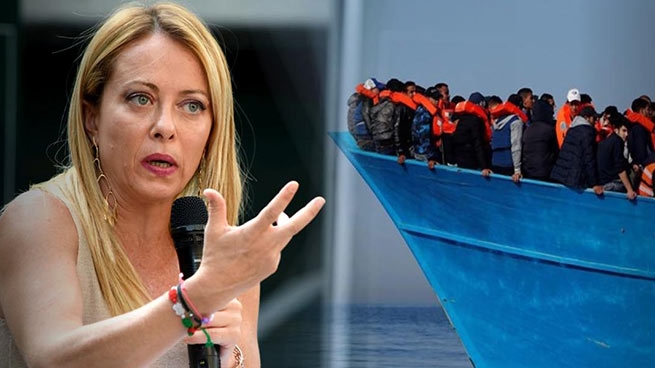 The government of Georgia Meloni has announced that it is closing ports to ships carrying illegal immigrants, no matter where they come from.

This is the first knife action taken in 24 hours to save the Italian identity from the millions of illegal immigrants who invaded Italy and changed its demographic composition by more than 10%! Nearly 6 million illegal immigrants flooded the country’s cities, creating suffocating situations, especially in the area of ​​crime.

Two ships owned by German and Norwegian NGOs that have taken on board some 300 illegal migrants in the Mediterranean are reportedly unable to enter Italian territorial waters as the government of Georgia Meloni has imposed a ban on them from entering ports, as has been done in the past. in such cases.

According to the media from the TV group Silvio Berlusconi, the new Italian interior minister, Matteo Piandozzi, signed a decision emphasizing that the Ocean Viking and Humanity1 vessels, with approximately 300 illegal migrants on board, “do not comply with Italian and European regulations in in terms of security, border control and the fight against illegal immigration.

The decision of the Italian Ministry of the Interior (which was brought to the attention of the embassies of Norway and Germany, countries where NGOs are registered) states that the Meloni government is “considering a ban (two vessels) from entering Italian territorial waters.”

It should be noted that in Greece the percentage of illegal immigrants or former illegal immigrants who were legalized in the process already exceeds 20% of the country’s population: more than 1 million Albanians or people of Albanian origin and more than 1 million Asians and Africans have found asylum and settled in Greece and no one is responding…

More precisely, they reacted earlier, until the XA party was banned, and their leadership was imprisoned for a period of 12 to 15 years of a strict regime.