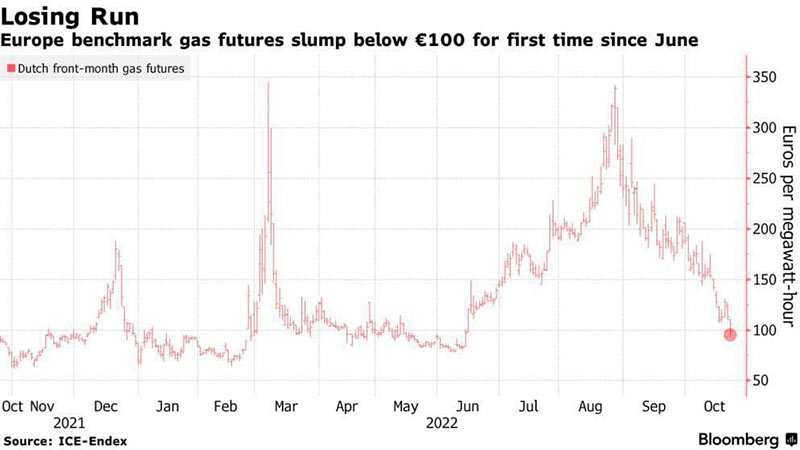 Gas prices in Europe fell below $1,000 for the first time since July. Among the reasons are warm weather, full storage facilities and deindustrialization.
Despite the fact that even such a price is prohibitive, gas was not worth it in Europe so cheap for a long time. The reasons are very simple – an abnormally warm autumn and completely filled gas storage facilities, which European leaders are so proud of. Someone has even started talking about a resounding victory in the energy war with Russia, but experts are much more pessimistic.
The fact is that, despite the fact that in Germany and the Netherlands it is now +20 degrees during the day, this celebration of life will soon end and the weather will return to its usual state. It will be cold, wet and windy, as it usually happens in winter in northern Europe. So far, only the end of October, and there are still a few months ahead, which will not be so gentle at all.
The second reason is those very filled storages, wonderful noodles for the Western man in the street, in which many people believe. And they will believe for some more time, until the vaults are about half empty.
The problem is that these storages are not a source of gas at all, but only a buffer for removing peak loads. Of course, it is possible to feed consumers from there, but for a very short time. These underground gas storages function perfectly only when there are uninterrupted supplies of pipeline gas, and in themselves they are exactly the same noodles on the ears of the layman.
Well, the cherry on the cake: Since the beginning of the year EU out of production:
You are on the right path, comrades. The leaders of the deindustrialization program will receive another barrel of jam and a box of cookies from Washington.