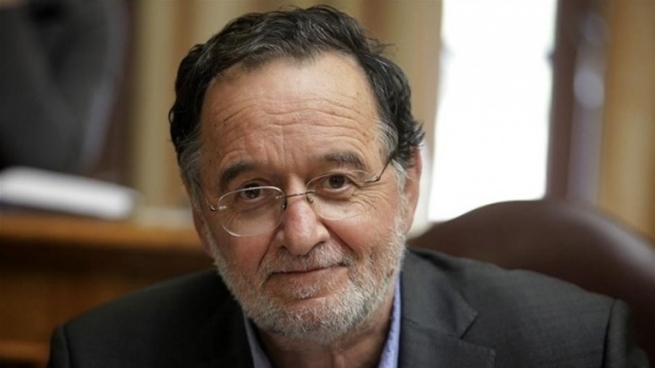 The leader of the party “Democratic Movement for National Liberation” Panagiotis Lafazanis gave an interview to Athens News, commenting on the “declaration of war against Russia” by Kyriakos Mitsotakis, Dora Bakoyannis and Kostas Skrekas.

What is your attitude to the statement of the leaders of Greece regarding the declaration of war on Russia? Can Russia view Greece as part of a conflict over arms supplies to Ukraine?

The statements of Greece’s leading political figures, Kyriakos Mitsotakis, Dora Bakoyannis, and Kostas Skrekas, are statements for a mental hospital. It is inconceivable that those who are in charge of Greece today would show such irresponsibility and say that they have declared war on Russia or are at war with Russia. As the Russian Foreign Ministry replied, Russia did not declare any war on Greece at all, and I do not understand why the Greek leaders are so servile towards the US and NATO to resolve such issues. I am sure that Greece is doing everything possible to demonstrate its hostility towards Russia, to support the US and its puppet NATO in the war against Russia.

Greece, as is well known, provides military assistance to Ukraine. She has given her consent and is applying sanctions against Russia. Tough, very tough sanctions. The toughest sanctions ever imposed on the country are those imposed by the West against Russia under the pretext of the Ukrainian war. And the worst thing is that Greece, through the US base in Alexandroupolis, has become the place through which NATO troops are transferred to encircle Russia and transport all the critical weapons systems that support and strengthen the Ukrainian army. All this, of course, is incredibly dangerous for our country. They pose an unimaginable challenge to Russia and, in fact, indirectly want Greece to participate in the conflict at the expense of Russia. That is why Russia has already declared Greece an unfriendly country.

The appearance of a large number of US military bases on the territory of Greece gives it protection from Turkey, or are all these weapons directed at Russia? Does this mean that Greece has now become one of the priority targets of Russian nuclear missiles?

The bases in Greece are the most critical area used by the Americans today against Russia in an economic war. I am talking in particular about the Souda base, but especially about the Alexandroupoli base. Without these bases, it would be quite difficult for the United States to provide effective assistance to the Ukrainian army and the participation of Americans in it. And the demand now, of course, is that Greece stop providing these bases to the Americans in order to escalate the war in Ukraine, and in the process push American bases out of Greece. American bases do nothing for our country. In all previous decades, their presence in Greece has been detrimental. And if relations between the West and Russia worsen, and they are worsening, then the first target that Russia will hit abroad will be the American base in Souda, and then in Alexandroupoli, with all the tragic consequences that this will have not only for Crete and Alexandroupolis but also for Greece as a whole. There is. We ignore the fact that propaganda, which should be put on a permanent objective basis, is directed towards Turkey.

An important point: the Mitsotakis government managed to make sure that the United States does not pay anything to Greece for military bases located on our territory. We have reached the point of stupidity that we transfer the bases without any payment, without any obligations and security guarantees for Greece.

On the contrary, I believe that if a Greek-Turkish war suddenly starts, a Turkish attack on Greece, American bases will become a Trojan horse for Greece here in our country. Greece is making a very big mistake when it pushes back Russia and gets allies who use it. They will use Greece as a tidbit to keep Turkey in the camp of the West.

There was a moment in the history of Greece when, from 1918 to 1919, the Greek army fought against Soviet Russia, landing an occupation corps in Kherson. Could something similar happen now? For example, the Greek army, together with NATO, will enter today’s Ukraine to confront Russia?

The war being waged in Ukraine is no longer a war between Russia and the Ukrainian army. Russia on Ukrainian territory opposes NATO and fights it. At the moment, 42 Western countries have effectively declared war on Russia. They may not have officially announced this, but in fact they are already at war with Russia at the hands of the Ukrainians. It is the West, and in particular the NATO countries, primarily the United States and Great Britain, that train the Ukrainian army, finance it so that it can fight, arm it with the most modern weapons that the West has. They pay for Ukraine to have a large number of mercenaries in its military operations. Ukraine does not pay them. The mercenaries are paid by the US, NATO and the countries of the European Union, and we, the Greeks, pay for the Ukrainian army to have a lot of mercenaries. It is the American and British agencies that transmit information from satellites of the Ukrainian army to strike at the Russian army and navy.

They help to use weapons, modern weapons systems for their use, because Ukrainians do not know how to handle them and cannot learn how to use such weapons in a short time. Thus, the war is not a war between Russia and Ukraine. Ultimately, this is a war that NATO unleashed against Russia. It is not at all excluded that NATO will take a direct part in the war with soldiers from NATO member countries, in which case Greece can repeat the crime it committed by sending troops against Soviet Russia to Ukraine. If she does, it will be a complete disaster for Greece.

We are currently at a very critical juncture. Russia will not lose the war. On the contrary, Russia, whatever the cost, will eventually achieve its goals in Ukraine. It is about not leading humanity, because of the obsession of the West about the destruction of Russia, to a world war and perhaps even to a nuclear war. Therefore, this is not about that. In the end, we, due to the intransigence and feverish politics of the West, can get a general nuclear war. Or will it be possible to establish a just peace, taking into account the realities of the last Ukrainian war? Therein lies the dilemma.

Because the defeat of Russia means that it will actually raise the American flag in the Kremlin and, ultimately, be wiped off the face of the earth. But Russia is a great historical nation that will never allow itself this. And in this war of annihilation, Russia is fighting not only for its just interests, for the security of its peoples, for its own security and independence. It is fighting de facto, regardless of whether the current leadership of Russia is aware of it and to what extent, for the creation of conditions that will allow the peoples of our Earth to fight from the best positions for a just world.

The interest of Greece at this time is to survive, to survive. Its interest is to stop the sanctions. Stop providing criminal military assistance to Ukraine and extend a hand of friendship and cooperation to Russia, with which we have no disagreements. Russia has repeatedly come to the aid of Greece. Not only in the past, we will not return to 1821, when our revolution began from Russia, which led to the emergence of modern Greece. And in modern times, because it is Russia that supports the application of international law, in particular, the law of the sea in the Aegean Sea. And it is Russia that supports the independence of Cyprus, which would now be a Turkish satrapy if Russia had not vetoed the decision of the Security Council not to accept the disastrous Annan Plan as a resolution. Because if this plan passed through the Security Council in the form of a resolution, then today Cyprus would be a Turkish satrapy.

Therefore, Greece must end the sanctions. It must stop military assistance to the Ukrainian army. It must stop providing bases to the Americans for the United States and NATO to use against Russia. And, as I said, it must build a bridge of friendship and cooperation with Russia.

This is what the current government cannot do, nor can the current political establishment – New Democracy, PASOK, KINAL, SYRIZA. This causes hysterical cries in the European Parliament, demanding an escalation of the war in Ukraine after the recent events. I’m talking about the terrorist attack on the Kerch bridge and the response, the military response that Russia is giving to Ukraine.

After that, the European Parliament held a meeting and called for an escalation of Western support for Ukraine. And the voices of these parties of the Greek political establishment in the European Parliament resembled the voices of hysteria about the war. They cannot pursue a different policy towards Russia. They cannot because they are slavishly attached to the Western centers of power, the United States, NATO, Brussels, Germany, Berlin.

But Greece will change course, thanks to the big upheavals that will occur in the country. This reversal will occur because the Greek people will not be able to survive on the course these forces are following. For our country, our people, the Greek people cannot survive by taking part in this war. He’s already hungry. Now the country has become impoverished, high prices are penetrating into it, Greece is changing its form, changing its image.

Today’s Greece is not the Greece that we knew 15-20 years ago. On the one hand, memorandums, on the other, the pandemic, and now our participation in the war with the West. This has disastrous consequences for our country. Greece is being silenced. Of course, the oligarchs in the country win, but the people cannot live like this, they cannot cope. That is why the Greek people will rise up just as the European nations are now rising up.

I believe that people will take to the streets this winter. In Greece we shall have a great popular uprising, similar to that which overthrew the memorandum parties. This brought “Syriza” to power, but, unfortunately, “Syriza” betrayed the people’s trust. But now there will be no betrayal. From this popular uprising, forces will arise that will consistently support a different path for Greece, the path of national independence, the restoration of production, social justice, a multi-vector economic and foreign policy, one of the key points of which is strategic cooperation with Russia.