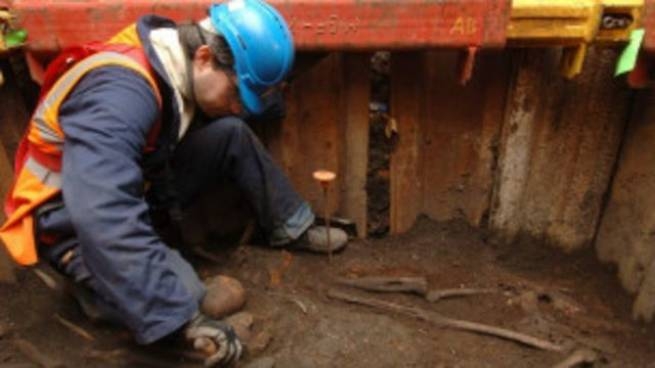 Within seven years, the Black Death, the deadliest outbreak of plague, claimed the lives of half the population of Europe in the 14th century. Who managed to survive and how?

The excavations of the plague pits, which took place in East Smithfield in London, helped answer this question. Large-scale burials there were recorded in 1348-1349. Analysis of the centuries-old DNA of victims and survivors of the Black Death revealed key genetic differences that helped some people survive the outbreak. The results of the study are published in the journal Nature.

Scientists say that not only luck, but also a genetic feature was on the side of the survivors of the deadly pandemic. Saved half of humanity from certain death, these differences still form the human immune system today. However, if then they helped protect against the plague, today they are associated with the vulnerability of their owners to autoimmune diseases – Crohn’s disease, for example, and rheumatoid arthritis, the authors of the study say. One of them, Luis Barreiro, professor of genetic medicine at the University of Chicago, explains:

“We are the descendants of survivors of past pandemics…and understanding the evolutionary mechanisms that contributed to our survival is not only scientifically important, but can also provide information about the mechanisms and genetic determinants of today’s disease susceptibility.”

The study, as it says CNN Greecelasted seven years and included the extraction of DNA isolated from three different groups of skeletal remains discovered in London and Denmark: victims of the plague, those who died before the Black Death, and those who died between 10 and 100 years after the deadly infection.

More than 300 samples came from London, a particularly plague-hit city, including people buried in the East Smithfield plague pits, which were used for mass graves at the height of the epidemic in 1348-1349. Another 198 samples were taken from remains buried at five locations in Denmark. DNA was extracted from the roots of the subjects’ teeth. The scientists were also able to test for the presence of the plague-causing bacteria (Yersinia pestis). The researchers looked for signs of genetic adaptation to the disease. Anthropology professor at McMaster University in Hamilton, Ontario Hendrik Poinar says:

“It’s a long process, but at the end of the day, you’re sequencing the genes of those people who lived before, during, and after the plague, and you might ask: were the genes of one population different from what another population carried?”

As a result of their work, the team identified a variant of a specific gene, known as ERAP2, that is believed to have a strong link to plague. Before the Black Death, a plague-protective variant of ERAP2 was found in 40% of people included in the London study. After the Black Death it was 50%. In Denmark, the percentage difference was more pronounced – it changed from 45% of samples buried before the plague to 70% buried after the pandemic.

So far, scientists cannot unequivocally say why this option provides protection. However, their laboratory experiments with cultured cells showed that in people with the ERAP2 variant, an immune cell known as a macrophage produces a very different response to the plague bacterium Yersinia pestis, Barreiro explained. Macrophages from people with this variant were better at killing bacteria in laboratory experiments than macrophages from people without it, he notes:

“We don’t know if it still protects against plague given that the number of cases in current populations is very low, but we suggested it should be done.”

It is also possible that the variation is effective against other pathogens, although this was not the aim of the study. The disadvantage of this variant is that it is associated with greater susceptibility to autoimmune diseases such as Crohn’s disease when the immune system becomes overactive. Barreiro emphasizes:

“This suggests that the population that survived the Black Death paid its price, which is to have an immune system that makes us more susceptible to reactions against ourselves.”

The Covid-19 outbreak is unlikely to similarly alter the immune system, the scientist said. Mainly because the disease kills people after their reproductive age, which means that the protective genes are unlikely to be passed on to the next generation. David Enart, professor in the Department of Ecology and Evolutionary Biology at the University of Arizona, notes that this change in genetic composition, occurring over decades, is a rare example of rapid natural selection:

“The narrow time span from which the samples were taken and the large number of samples analyzed are key points of the study, allowing the authors to accurately date natural selection. Although evolutionary biologists have previously wondered about the possibility of natural selection during the Black Death, proper research would not have been possible without this accurate dating of many specimens.