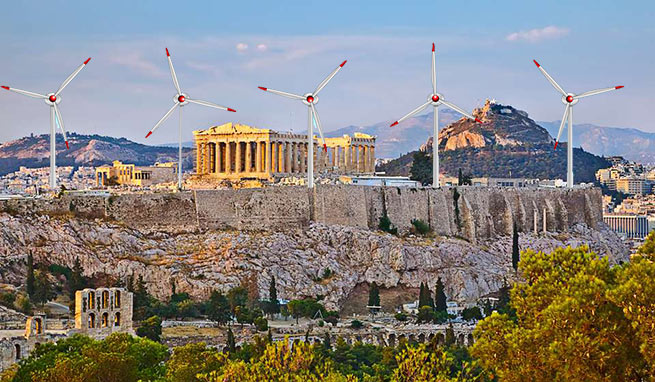 Efforts to “capture” nature reserves and protected areas in Greece by electricity companies have been going on for many years. At the same time, the Mitsotakis government, deceiving the public, continued to place wind turbines throughout the country, even in scorched areas!

This has been amply demonstrated by the constant deception of the inhabitants in the mountains of Gerania, where, despite repeated public promises that the area will be protected and reforested, all preparations are underway for … an invasion of wind energy companies (RES).

Following the catastrophic fire on May 19, 2021, which burned more than 60,000 acres of virgin forest in the Natura 2000 reserve, the competent ministers assured the public that no wind turbines would be installed in the area under any circumstances.

But their assurances turned out to be another lie after it was revealed that the Energy Regulatory already issued certificates to renewable energy companies (and published them publicly) that Deputy Minister of the Environment Georgios Amiras was forced to admit in Parliament a few days ago.

The question arose after complaints from the residents and a related question asked by the MP from ΜέΡΑ25 Criton Arsenisto which Mr. Amiras responded inimitably: “No permission to install. They are certified by manufacturers ΡΑΕ (Ρυθμιστική Αρχή Ενέργειας). The manufacturer’s certificate has nothing to do with the installation license. The Energy Regulatory Authority (PAE) assures the investor that yes, there is a network and capacity. That’s all”.

It is perhaps no coincidence that neighboring Psata and Villa were also victims of arsonists. and this summer, and three times in June and July. And it is not surprising that the arsonists, who were so “zealously searched for”, were not found. Looks like they weren’t looking for it…

What about the windmills on the Acropolis?

The MP from the opposition answered the obvious question: Arsenis noted that, on the one hand, they say that this area has been declared a reforestation zone, and on the other hand, they are starting the process of creating wind farms in the area. Their argument is that “just because the permit process has begun, it does not mean that it will be completed.

“Are you saying that in a place where you have committed not to install wind turbines, these 58 wind turbines will go through the process of approving environmental conditions, submitting an environmental impact study, obtaining a manufacturer’s license, that is, they will go through the whole process, and you in end up just rejecting them?” – asked the MP from ΜέΡΑ25 during the debate on this issue.

“There is an urgent need to protect the mountains of Gerania and the scorched areas, as required by the European Union and legislation. The government is violating the condemning ruling of the European Court of Justice, which recalls the ban already in place in legislation since 1992, according to which it is forbidden to install wind turbines, it is forbidden to carry out any project on protected area of ​​the European network NATURA, if there is no management plan.In Gerane, there is no such plan.

Instead of defending Geranea with an official administrative decision, the ministry, closing before the discussion of wind turbines in the area, tells us that the PANE has started the process without meaning that it will be completed. It looks like absurdity, but it’s actually a plan. They are forcing the PA to issue permits to anyone who asks for them without considering the exclusion zone when they are required by law to do so. And then the New Democracy government comes in and says, “It’s good that they applied, it’s good that they got a manufacturer’s license, it’s good that they started environmental licensing.”

So I want to ask how you do it. If tomorrow the company applies to install wind turbines on the Acropolis, will you give it a manufacturer’s license, and will you go through the process of obtaining environmental permits? This is absurdity, in fact, it is a convenient absurdity that serves the interests of the ΡΑΕ, which, under the auspices of the government, circumvents all laws, all European directives. We urge you, since you have made a commitment, to make that commitment a law.”.