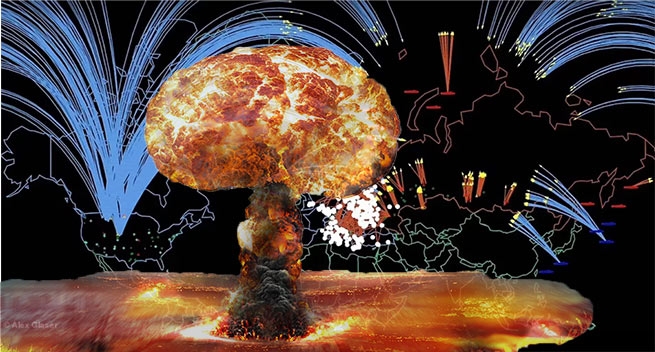 The model of the development of a nuclear conflict, created at Princeton University (USA) and dubbed “Plan A”, predicts 34.1 million dead and 55.9 million injured from the first nuclear exchange between the US and Russia alone.

The four-minute animated film, known as “Plan A”, is intended to highlight the “potentially catastrophic” consequences of the conflict between Russia and NATO countries. It was developed by Princeton University researchers affiliated with the Science and Global Security (SGS) Program and was originally released in 2017. However, the war in Ukraine has again sparked discussions about the prospects for nuclear war and revived interest in such models.

Dr. Alex Glaser, co-creator of Plan A, said Newsweek: “As far as can be judged, this is the most serious crisis with a potential nuclear dimension involving Russia and the US/NATO since the end of the Cold War, even if the risk of nuclear war is still considered “small”, as many analysts claim. A crisis like the one we are currently facing often leads to misunderstandings between the parties, exacerbated by the fact that there are very few active channels of communication between Russia and the US/NATO.”

The model, based on realistic data on nuclear force positions, targets, and causality estimates, predicts that 34.1 million people will die within hours. As a result of the catastrophic conflict, 55.9 million people will be injured – These figures do not include subsequent deaths from nuclear fallout and other consequences.

Nuclear war simulations may seem intimidating, but governments can use them to develop contingency plans and educate the public on how to survive an attack. This simulation begins in the context of a conventional non-nuclear conflict: Russia launches a nuclear-capable aircraft from a base in Kaliningrad to stop the US and NATO advance before they can retaliate from the air.

Russia then sends 300 nukes, either by short-to-medium-range aircraft or missiles, towards NATO bases and the bloc’s advancing forces in Europe, to which the international military alliance will respond with some 180 nuclear bombs. At this stage, the number of casualties is expected to reach approximately 2.6 million people within the first three hours, and Europe will remain virtually destroyed.

Following this Pentagon will launch missiles from the US mainland and nuclear submarines, inflicting a strategic nuclear strike of about 600 warheads. Before this strike reaches its target in Russia and its weapons systems are (theoretically) destroyed, Russia will launch nuclear weapons from its missile silos, submarines and mobile launchers. The model predicts 3.4 million casualties in this phase of the war, which will last only 45 minutes.

One of the Russian nuclear warheads falls on Crete, specifically on the NATO base in Souda, as seen in the corresponding video. It can be assumed that other US military bases in Greece will be subjected to similar nuclear strikes.

In the final phase of the conflict, both sides target each other’s 30 most populous cities and economic centers, sending 5 to 10 nuclear bombs to each target in an attempt to interfere with each side’s recovery from the war. Such a move, the researchers conclude, would result in another 85.3 million victims within 45 minutes.

The total number of victims is at least 100 million people. Now we are talking about the situation DEFCON 1, which means “total nuclear war” and the application by both sides of the doctrine of MAD (mutually assured destruction). And according to our estimates, the death toll will be much more than 100 million …

Another point that Princeton “missed” is China’s involvement in the conflict. In the case of World War III, the Celestial Empire will not stand aside for the following simple reason: if If the US and NATO win the war, even with heavy losses, but remain combat-ready, then China will soon follow. Americans do not need rivals in world hegemony. Therefore, an estimate of 600 million dead would be much more realistic, and with the participation of China, the number would exceed a billion people.

The rest of the people on the planet will have to learn to live with radioactivity and devastation, and the countries of Africa and Asia that have not been subjected to direct nuclear strikes, no matter how sad it may sound, are assigned the role of centers of science and culture on the ruins of civilization. And this is in the event that a global nuclear winter does not come …