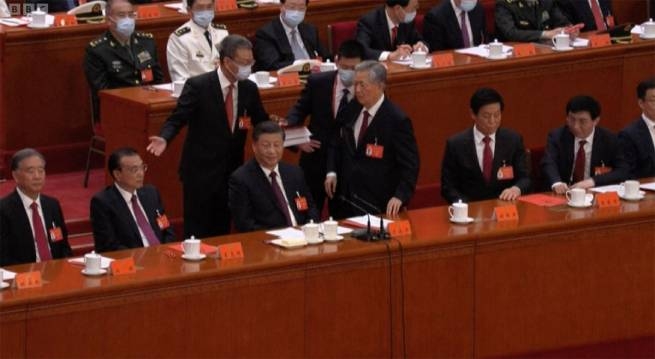 Hu Jintao, the former head of China, was detained right at the presidium during the 20th CPC Congress, and Western media are actively publishing videos of the incident.

The former Chinese leader was unexpectedly escorted out of the hall at the closing of the Communist Party Congress despite his reluctance to leave the presidium, as seen in a video released by CNN. It is reported that there are arrests of prominent CCP members all over the country. The media admit that this is Xi’s reprisal against opponents. The Chinese authorities have not yet commented on the incident. Hu Jintao led China from 2003 to 2013.

In front of all the congress delegates, a man first approached Hu Jintao. Sitting next to him, Li Zhanshu, a member of the Politburo Standing Committee, kept his hand on his back. Hu obviously did not want to leave his “familiar” place, but he had to obey.

Hu Jintao is one of the main opponents of the current leader Xi Jinping. The latter is expected to be re-elected for a new 5-year term. In this regard, there was a rumor that Hu had been arrested, but there was no official confirmation. There is another version – allegedly Hu simply did not want to leave the presidium after he was not re-elected to the Standing Committee of the Politburo of China.

According to CNN, while still sitting in the presidium, Hu tried to reach for some document, but Xi put his hand on it. Other footage shows that Li Zhanshu, who was sitting next to Hu, tried to rise from his seat as he was led away, but his colleague Wang Huning, a member of the Politburo Standing Committee, pulled him by his jacket.

Hu, who retired in 2013, has waned in recent years. His departure was a dramatic moment on the normally procedural closing day of the National Congress of the Communist Party. The event, which is attended by approximately 2,300 delegates, ended on Saturday with an official reshuffle of the party elite.
It is expected that tomorrow the new top leadership will be announced in the Communist Party. Apparently, Xi will be re-appointed as head of the party, violating the rule of two terms for the top leader there.