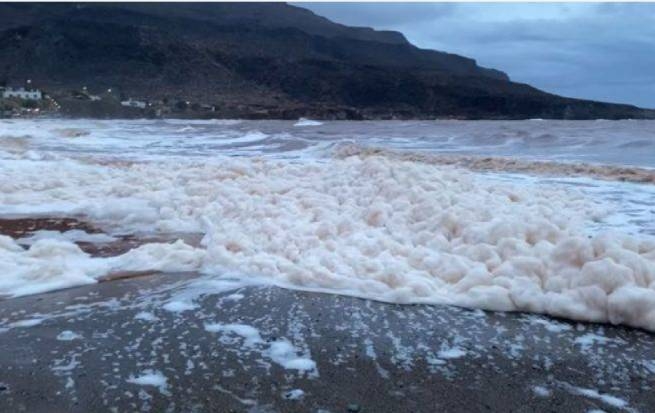 Unusual white foam covered the beaches of Crete after the aggression of nature that hit the island over the weekend. Scientists explain the causes of the phenomenon.

Although this foam can hardly be called white – from the impurities of debris and dirt, it turns brown in some places, especially, as the video shows, on the coast of Amnisos and Kato Zakros.

ΕΛΚΕΘΕ Research Director Dr. Stella Psarra, as reported cretalive.gr, said that this is the result of the huge amount of precipitation that fell over the weekend in Crete. As a result, tons of mud were formed that ended up in the sea – various bulk materials, including a large amount of nutrients. Most likely, the latter caused the intensive growth of planktonic microorganisms, and as products of their metabolism, they release polysaccharides, proteins, and other organic components into the marine environment. When they were mixed and the presence of waves, the phenomenon of foaming occurred (remember how protein is whipped when preparing meringue).

According to Ms. Psarra, it is non-hazardous and non-toxic. However, it will be possible to state this with certainty only after analyzing water and foam samples. The Greek Research Center has often pointed out the need for a coastal zone monitoring network and suggested this to the Crete region. But, unfortunately, this has not been done.

Researcher ΕΛΚΕΘΕ believes that the phenomenon shown in the video must be the product of the explosive growth of tiny photosynthetic organisms (phytoplankton), it’s like pouring fertilizer into the sea:

“I have never seen it in Crete, it reminds me of images of the much richer seas in northern Europe, or the phenomenon seen last year on the coasts of the Sea of ​​Marmara reaching northeast with currents. In the Aegean, it makes a big impression on me, and it would be interesting to get a sample.”