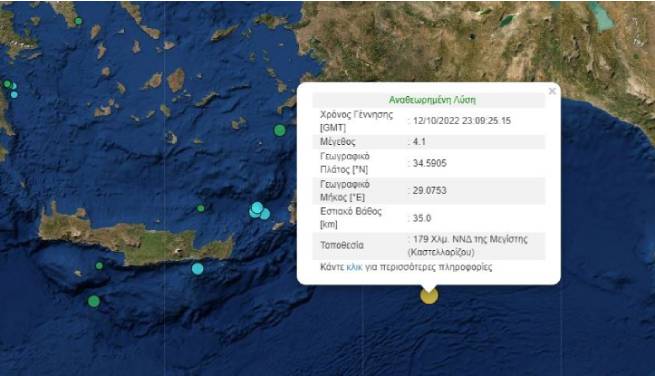 Tremors measuring 4.1 on the Richter scale were recorded off the coast of Kastelorizos tonight at 02:09.

According to the Institute of Geodynamics, the epicenter of the earthquake was 179 km northwest of Megistis, the depth of its focus was 35 kilometers, reports CNN Greece.

Earthquake information coming from the Athens Geodynamic Institute and the European Mediterranean Seismological Institute is the decision of an automatic computer system, without the participation of a seismologist. As new data becomes available, they are constantly updated.

On August 7, around 11 am on Sunday morning, an aftershock measuring 4.2 on the Richter scale rocked Kastelorizo. How reported our publication, according to the Institute of Geodynamics, the epicenter of the earthquake was 15 km east/southeast of Megisti, the focal depth was 10 km.