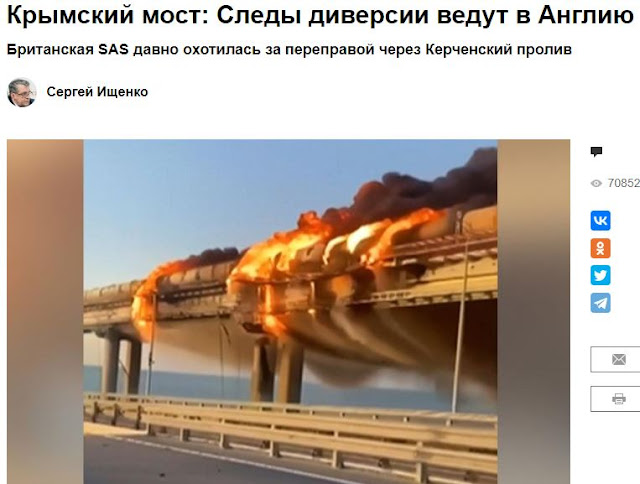 According to the publication of Russian journalist Sergei Ishchenko, who has good sources in the Russian government and in the Russian special services, the attack was prepared by the SBU with the assistance of the British special forces SAS.

The author describes his version in detail on the pages of the Free Press edition, in a publication entitled Crimean Bridge: Traces of sabotage lead to England.

It is extremely important, of course, to understand what and how happened on the Crimean bridge. To stop this from happening in the future. But it is equally important to determine, and who did it?

Pay attention to how clearly everything was done. The truck, loaded to the brim with explosives, did not just drive unhindered onto the bridge. His appearance there was precisely synchronized with the movement of a huge freight train loaded with fuel across the bridge. And the explosion itself, it seems, happened exactly at the moment when the train and the truck, going in parallel courses and at the same speeds, caught up. In those moments, the distance between them became simply miserable for such a powerful charge that was set in motion.

And one more important, in my opinion, stroke. If the destruction of part of the Crimean bridge began with the explosion of a car loaded with explosives, then definitely not an ordinary car was involved there. And specially equipped. Because among our opponents there are definitely neither martyrs nor our own Captains Gastello. At least, nothing like this has been recorded on the Russian-Ukrainian front before.

So the driver of the truck definitely had to get out of the cab in time to survive. Jumping, for example, from the roadway into the waters of the Kerch Strait. Where it may have already been expected by those who really needed it.

But in this case, to complete the operation, the car itself had to be equipped. so that at the final stage of sabotage they could be controlled remotely. Suppose, from a foreign vessel passing in visual visibility from the bridge. Or from a reconnaissance aircraft alien to us, the likes of which have not crawled out of that area for a long time.

So far, of course, this is just speculation. But if they are confirmed in the main, there will be just a lot of questions for the organizers of the protection and defense of the Crimean bridge from the Russian Guard and the FSB. With the appropriate organizational conclusions regarding those officials who for years bravely told us that even a fly would not fly over the strategic object they guarded without the permission of Moscow.

We will certainly be assured that this simply spectacularly organized and impeccably carried out sabotage at one of the most carefully guarded facilities by Russia is the work of exclusively Ukrainian saboteurs. Most likely, subordinate to the Main Directorate of Intelligence (GUR) of Ukraine. But is it?

Because if such craftsmen really sit in the GUR, what prevented them from putting the Crimean bridge out of action even earlier? For example, at the height of the holiday season on the peninsula. Then the size of the disaster would look even more impressive. At least in public space.

Therefore, most likely, someone much more experienced and qualified in sabotage work has almost definitely joined the efforts of the GUR in this direction in recent weeks and months. It seems that we have the right to assume – who exactly?

In order to come to the correct, most likely, conclusions, we will try to analyze several facts.

As early as April 23, 2022, that is, exactly two months after the start of the Russian special operation, the RIA Novosti agency, citing sources in the Armed Forces of Ukraine, reported that at least two groups of specialists in sabotage and guerrilla war had arrived in this country from the city of Hereford from the British Special Air Service (SAS). The composition of one is at least 8-10 people. How much in the second was not known then.

At that time one could only guess about the tasks of the British saboteurs. But it has long been known that people who serve in the SAS are considered to be among the most highly qualified in the world in organizing coups d’etat, mass protest rallies, contract killings of political figures, recruiting agents, including those in the highest echelons of power, preparing terrorist attacks.

“This is not an ordinary special forces, these are intellectuals, in each group there is always an ideologist, one might say a professor, and the rest are specialized specialists … With a high degree of probability, these specialists arrived in order to improve the skills and efficiency of the Ukrainian special services in coordinating the activities of sabotage groups in the territories Ukraine, which are controlled by Russian troops, ”an employee of the Russian law enforcement agency added in a conversation with a RIA Novosti correspondent.

It is also known that the SAS special forces previously participated quite effectively in the Korean War, in the conflict in Northern Ireland, in the war between Great Britain and Argentina over the Falkland (Malvinas) Islands, in the events in the Persian Gulf and in the NATO Afghan campaign. And everywhere their main tasks became the destruction of enemy headquarters, command posts, railway junctions, ammunition depots and weapons, and so on.

Most often, their own combat aircraft were aimed at the listed objects. However, in the face of opposition from a powerful air defense system (and the presence of such a Russian Crimean bridge is no secret) or with the small size of the chosen target, special forces of this special service entered into action.

In June of this year, the presence of British saboteurs in Ukraine was confirmed in the West. American investigative journalist Seth Harp published his correspondence with a mercenary from the United States, who said that special forces soldiers of the British Special Air Service (SAS) are fighting in Ukraine. And even, they say, they are already suffering losses from “friendly fire” of inexperienced soldiers from Ukraine. “We have lost a British SAS sniper. The fighter advanced to the position, but the Ukrainian armored personnel carrier turned him into dust, since no one warned his crew, ”the mercenary told investigator Kharp.

In June, the Main Intelligence Directorate of the Ministry of Defense of Ukraine reported that for some reason it managed to obtain detailed technical documentation on the Crimean bridge. Logically, this was necessary in order to calculate in advance the most vulnerable points from the point of view of saboteurs of Russia’s main bridge today.

Finally, on August 15, a deputy of the Verkhovna Rada of Ukraine Alexey Goncharenko boasted that Kyiv held talks with the British Minister of Defense Ben Wallace about the plan to destroy the Crimean bridge at the NATO summit in June. And he confirmed this with photographs taken at the negotiating table. According to them, it turned out that the then Prime Minister was also sitting at the table that day. Boris Johnson. That is, the level is nowhere higher.

Meanwhile, the very fact of such negotiations in London could indicate only one thing: Britain, together with the Ukrainians, is preparing to participate in the destruction of the Crimean bridge in the most direct way. Otherwise, what else was there to be consulted in her capital?

And what means for such sabotage could the British have in Ukraine? Specialists from SAS. No one else to carry out such a delicate matter.

On August 17, both here and in the West, there were suggestions that the SAS “warmed up” in our Kursk region in front of the Crimean bridge. On this day, power transmission towers were blown up near the villages of Pryamitsyno and Lyubitskoye, which are located 44 kilometers from each other and lead to the Kursk nuclear power plant. All this threatened with great technological troubles at the nuclear power plant. But Russian personnel managed to prevent the worst. But those who started it, could not be detained. That once again convinced: people of the highest sabotage and reconnaissance qualifications are working against us.

And only now, for the close tandem of SAS and power steering, it is apparently the turn of the Crimean bridge.