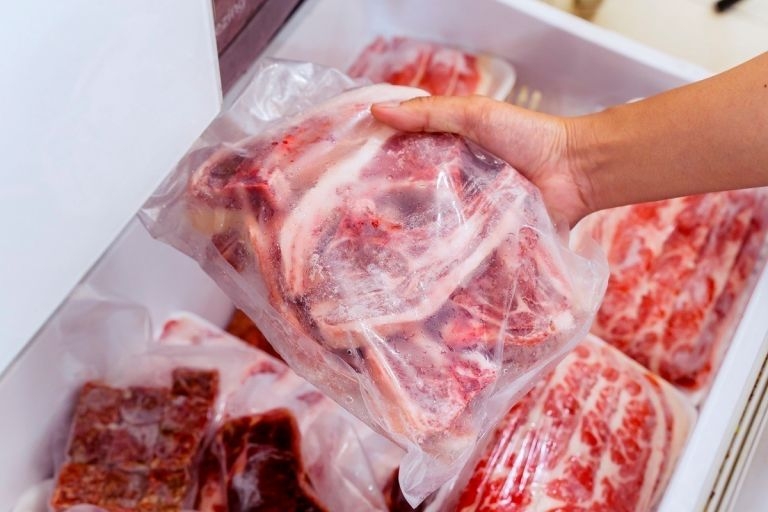 Have you ever wondered what the “red liquid” is in a package of raw meat sold at the supermarket?

We have all noticed that there is red liquid/juice in every package of red meat. You might think it’s blood, but you’d be wrong. What many think of as the blood in packaged meat is actually myoglobin, the protein that gives raw meat its characteristic red hue and forms some of the red liquid you normally see in the package.

Myoglobin is found in the muscles of the animal and, due to its intense color, determines how “dark” (reddish or soft pink) the product is. Its purpose is to store and transport oxygen to the muscles. This oxygen is used for energy metabolism. Animals with a large amount of myoglobin are classified as “red meat”and animals with less myoglobin are considered “white meat”.

White meats include: poultry, pork and seafood, which do not contain much myoglobin because their muscle fibers are designed for quick bursts of energy.

Red meat is made up of a different type of muscle fiber that is designed for longer periods of “muscle activity” and therefore consumes energy more gradually.

When you see a darker spot on the flesh of some “white-meat” animals (like chicken legs), it’s because those areas of their muscles are being used more and more. They have more myoglobin.

The red liquid you see in packaged meat is a combination of water and myoglobin as the blood is drained during the processing and packaging step of the meat production line.

In addition, the dark color (from shades of pink to brown) that appears during cooking is also due to myoglobin.

Heat changes the color of myoglobin from a red pigment to brown or grey. The more red meat is heated, the more moisture is removed from it and the more it changes color. Meat cooked for a shorter time may retain some of its original redness due to myoglobin.

When exposed to air, myoglobin begins to darken naturally and often is an indicator of the freshness of the meat. Have you ever noticed that some packages have meat with a brown/gray tint? This is because these fragments product has been exposed to oxygen.

One of the tricks used by the food industry and meat dealers is to preserve the red pigment myoglobin with carbon monoxide (carbon monoxide, colorless gas, odorless and tasteless. If inhaled, it is toxic to humans and animals even in small concentrations).

This treatment gives the impression that the meat is fresh because it retains its reddish or pink color.. And, depending on how well the meat was wrapped (e.g. sealed in an airtight container)there is a chance that oxygen did not touch him.