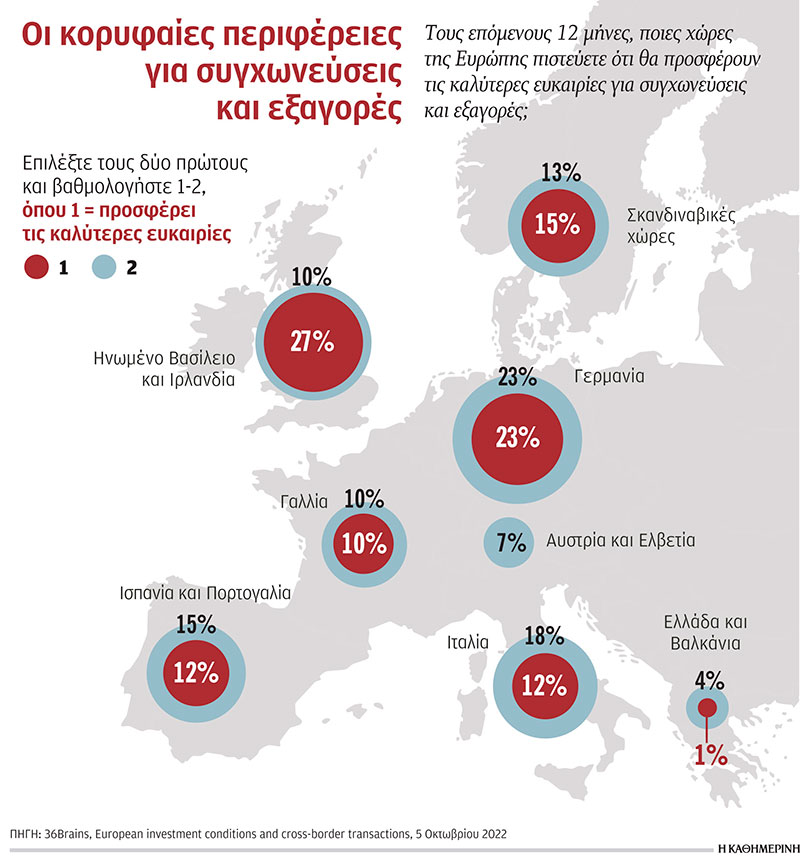 Greece is now among the eight target regions for possible mergers and acquisitions in the coming period. This is the result of a survey conducted among 60 top managers of large companies and investment funds by the Italian-German consulting company 36Brains.

When asked “which countries in Europe will offer the best M&A opportunities in the next 12 months”, 5% of CEOs answered “Greece”. This is the highest figure for Greece, whose GDP is less than 2% of Europe, and the national debt exceeds 210% of the country’s GDP. It should be noted that the answers to the questionnaires were received before mid-summer.

In any case, after a record-breaking 2021, M&A activity in Europe and Greece remains high so far, and throughout 2022, notes 36Brains. “All deal participants who participated in this survey have completed at least one deal in Europe between €25 million and €200 million in the last two years and are expected to remain engaged,” the study said.

However, according to the study, there are some indications that the pace of M&A activity will slow down as competition for certain assets decreases. A majority (55%) believe that fewer deals will be tendered in 2022, predicting that less than 25% of deals will end up in a competitive process. Moreover, even when transactions include auctions, only 13% of respondents expect them to be highly competitive. Nearly half (45%) expect tenders to be non-competitive at all. Significant change from 2021.

However, a number of parameters appear to continue to support M&A activity. Some trades are aggressive and expansive while others look more defensive.

The desire to expand into new geographic markets is the most frequently cited priority for respondents, with more than one in five (22%) citing it as the most important reason for M&A. Indeed, more than half of the participants in this survey (52%) said that geographic expansion would be at least one of the items in their M&A strategy.

An even larger share cites the need to obtain synergy between companies as the driving force behind transactions, with 78% citing this as a key motive. The need to cut spending in a difficult economic environment will no doubt be critical, even if slightly fewer respondents (20%) consider it their immediate priority.

But there are other parameters that affect the M&A market. As Marianne Vidiadi, head of 36Brains, explains to Greek journalists across Europe, “corruption remains a deterrent, so much of our work is focused on transparency.” She adds: “Our experience has taught us that in complex and increasingly fragmented markets, knowledge of local practices and customs is essential to identify and prevent legal and reputational risks. it’s about new regions or markets that we’re not used to working in. A local expert can make a big difference.”