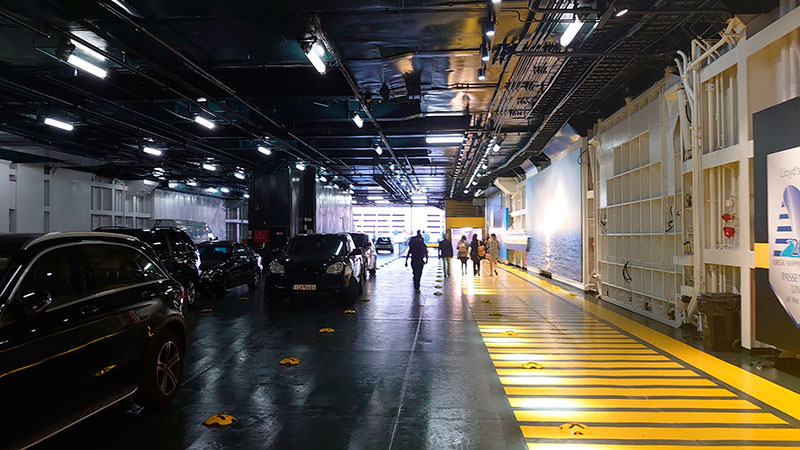 On Monday afternoon, the port of Thessaloniki will blow the characteristic whistle of the first ship to Smyrna as Levante Ferries opens the long-discussed line. Smyrna di Levante will be able to transport 948 passengers and dozens of trucks to the other side of the Aegean.

This is a yellow and white RoPax (cargo-passenger) type vessel, about 160 meters long, with a maximum speed of 20 knots and a cruising speed of 18, which will sail from Thessaloniki to Smyrna every Monday, Wednesday and Friday, and from Smyrna to Thessaloniki every Tuesday, Thursday and Sunday, flight duration up to 14 hours.

For its service, the necessary infrastructure has been created in the port of Thessaloniki – to provide cruises and carry out all the necessary checks by the competent authorities (the fact that Turkey is outside the Schengen zone means more complex customs and other procedures for passengers and cargo).

Ten year dream
When the ferry service between Thessaloniki and Smyrna was first seriously discussed, the year 2002 was on the calendar. It was exactly 20 years ago, and the Balkans were slowly moving from a period of unrest and war to a period of calm. Yugoslavia has just returned to civilian life. The sirens of war were recently silenced after ten long years of violent conflict (1991-2001) and NATO vehicles no longer passed through the port of Thessaloniki. It was then that a delegation from Thessaloniki visited Izmir for the first time to discuss with local authorities and business representatives the possibility of creating a ferry line between the two cities, which would serve mainly commercial flows, as well as passenger traffic.

The Turkish side has already shown great interest in this line, given that thousands of trucks from Turkey, loaded with all kinds of goods, have to make a long cycle every day to reach the markets of Greece and Central Europe, which leads to the loss of precious time and money. Moreover, the opening of such a “friendship line”, as some have called it, will also have a positive effect on bilateral relations, as it will act as a sea bridge between the two peoples. However, despite the efforts of both parties, the entire project was referred to the Greek courts, mainly because the concerned ship owners from the Greek side were ultimately unwilling for various reasons – political, business and financial – to use this line, as commented by APE -MPA people who experienced the whole process “from the inside”.

Since then, many more attempts have been made to establish a ferry service between Thessaloniki and Smyrna. In 2011, the then mayor of Thessaloniki, Yannis Boutaris, also took over the project, aiming not only at the movement of goods, but also at the exchange of tourist flows: in addition to the movement of trucks, the line could attract visitors from neighboring Turkey to Thessaloniki and Northern Greece, and also to provide easier access for Greeks to the regions of Western Pontus. However, even that time the attempt was unsuccessful.

Other attempts to establish ferry links with Smyrna and other parts of Greece such as Volos and Lavrion preceded, interfered with, or followed them. However, after several routes, the lines were abolished, and a permanent ferry service to Izmir remained a summer night’s dream. 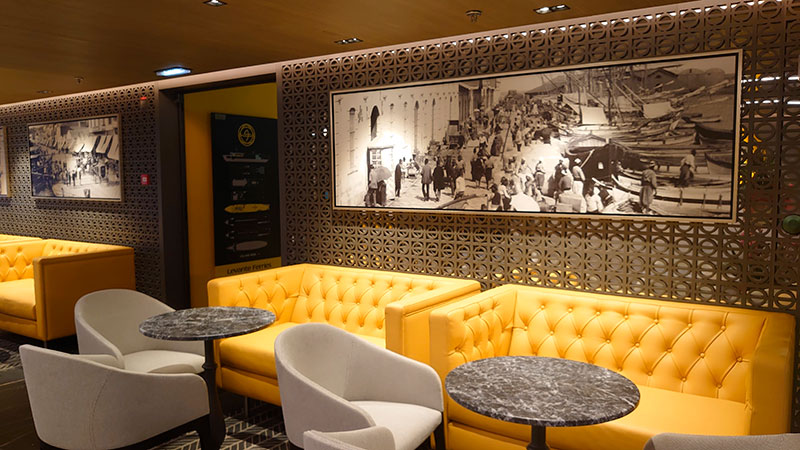 “Smyrna di Levante”
According to information received by APE-MPA from various sources (unfortunately, the shipowner could not be contacted despite repeated attempts for two days), the ‘Smyrna di Levante’ was built in Bergen (Norway) in 1977 for Unity Line and was named ‘Kopernik’. According to information received from people familiar with the market, the ship, among other things, was used in the past to transport railroad cars from one end of the English Channel to the other along the rails laid on board.

Levante Ferries has carried out a complete refurbishment, technological and mechanical upgrade of the vessel as part of a total investment (including its purchase) of more than 15 million US dollars, resulting in nothing resembling its previous appearance and previous operational characteristics. The company’s goal is that the line, which marks the entry from inland waters into international navigation, will not be seasonal, but maintained throughout the year (the company currently operates flights to Zakynthos, Kefalonia and Ithaca via Patras and Kyllini).

Save up to two days?
“Today, trucks from Turkey, to reach their destination in Greece and Europe, pass through three different points, depending on which one they choose. The first is Kipi on Evros, the second is Ipsala on the border with Bulgaria and the third is the line Izmir-Trieste According to my own calculations, thanks to the Thessaloniki-Smyrni line, trucks will save from one and a half to two days, and this will be reflected in the cost of transportation, driver fatigue, etc.,” explains the President of the Association of Shipping Agents to APE-MPA Thessaloniki and the Federation of Hellenic Shipping Agents (ONPE) businessman Vassilis Kampakis, who in 2002, during the presidency of Apostolos Genicaris of the PPA, “warmly” (as a businessman, not the president of the Association) took up the issue of creating a line and took initiatives in this direction. 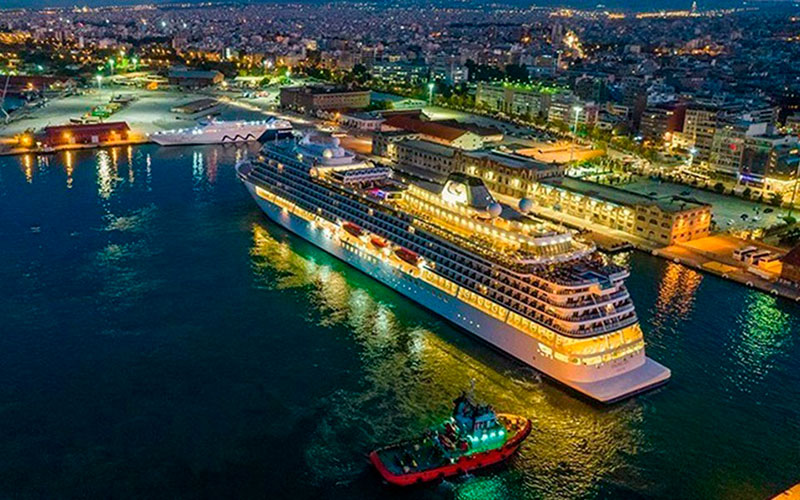 In fact, already at that time, the Greek delegation, of which he was a member, visited Izmir, where he had meetings with the then mayor, the presidents of the port, the local chamber and the Federation of Truck Drivers.

“Since then, I have visited Izmir for the same reason more than ten times. Despite the great interest from the Turkish side, the Greek shipowners did not dare to do so due to the recurrent political tensions between the two countries, as well as for financial reasons, especially that Turkey is a third country, so there is no possibility of receiving subsidies,” he emphasizes and adds that the first contacts with Levante Ferries were established about two and a half years ago under the chairmanship of Sotiris Theofanis in the Port Authority of Thessaloniki.

Apostolos Genicaris was the President of the Port of Thessaloniki for 11 years, from 1993 to 2004. The first talk of this particular connection, he tells APE-MPA, took place shortly before the end of his last term, around 2002. Although, he clarifies, these lines have nothing to do with the port operators who simply serve them, even if in some cases they lose revenue to support them, for example, by creating a reception infrastructure or reducing port charges, he saw an interest in the possibility of creating ferry service Thessaloniki-Smyrna. “When such a line opens, it is precisely because there is interest, in this case mainly for moving goods from Turkey to Greece and the rest of Europe, but also because there may be interest in passenger traffic. But these efforts have not been successful. “, he notes. 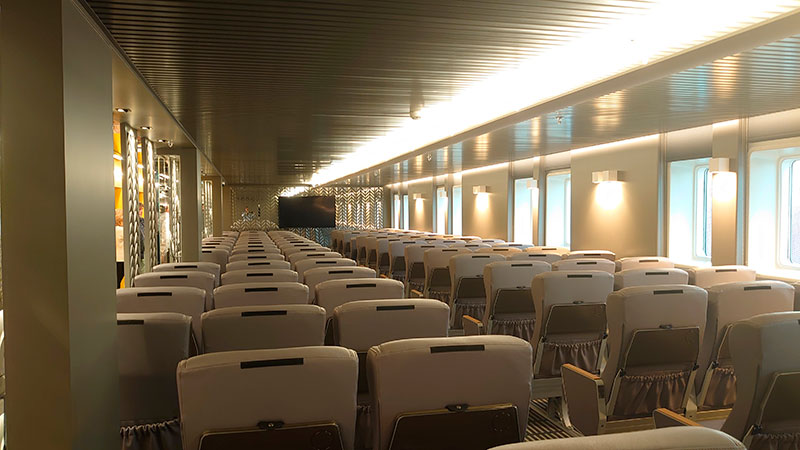 17,000 trucks looking for “easier” routes
“I remember that at the time we were discussing how much the Turkish trucks would win. At that time, the drivers of the 17,000 Turkish trucks carrying goods sometimes had to travel all over Turkey to get the goods to the markets. This line could change a lot , and the Turkish side really wanted it.But then there were problems, for example, the difference in port dues between the two cities (ed. in Thessaloniki it was 8,000 euros, and in Izmir – 19,000, according to Boutaris’ earlier statements), but I believe that the biggest deterrent was the intermittent political tensions between the two countries. So the story finally died out,” former Thessaloniki mayor Yannis Boutaris, who visited Izmir in 2011 and held talks with the then mayor of the Turkish city, told APE-MPA.

Regarding what has been done by the port to serve the new ferry service, port representatives say that the organization immediately prepared the necessary infrastructure in the vessel’s cruising area for servicing it and carrying out the necessary checks by the competent cooperating authorities. “Suitable areas for the reception, processing and control of passengers, vehicles and cargo have been created and configured, as a result of which the ship service berth has been transformed into a reception area for international shipping lines,” they emphasize.

With information and photos from APE-MPA