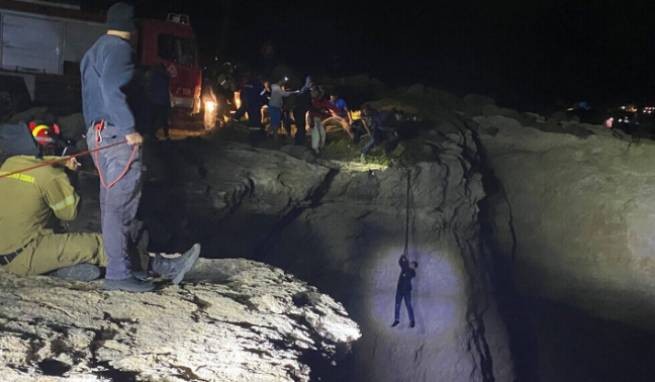 They said the boat had been escorted by two or three fishing boats since it left a village near Ayvalik on Turkey’s west coast and entered Greek territorial waters off the island of Lesvos. According to their messagesfishing boats sailed on the sides of the boat, cutting off the wind and strong waves, and they could not notice the rough sea.

The fishing boats left the boat with the illegals when they approached the territorial waters of Greece, according to the Greek Coast Guard, which is now investigating this issue. Survivors said that the moment the fishing boats left, panic set in on the boat as the passengers were hit by huge waves.

At the time of their advance to Greece, a northern wind was blowing in the area with a force of 7 to 8 on the Beaufort scale, that is, a wave height of more than 5 meters. The boat sank 100 meters from Thermi beach on the island of Lesvos, around 11 am on Wednesday October 5, 2022. 18 passengers were killed – 16 girls aged 20, one man and a 15-year-old boy, a total of 28 people were saved. The last three survivors were found on Friday, two days after the tragedy. They managed to get to the shore on their own, and there they were discovered.

The number of missing people is unclear, as survivors say there were between 40 and 53 passengers. The fare ranged from US$300 to US$500, compared to US$3,000 to US$7,000 usually charged by smugglers, suggesting that this was a private initiative of Turkish fishermen.

The passengers were from Africa. Only a few of them were wearing life jackets. One survivor told Greek TV channel ANT1 that she bought the vest in Turkey. Another woman said she removed the life jacket from the dead passenger. How this happened, of course, is not specified.

The search and rescue operation continued on Friday in difficult weather conditions due to prevailing gale-force winds. Storm winds also blow from the island Kitera, where the search and rescue operation continued for about 15 migrants on Friday as well. There were reports of seven bodies floating near the rocky shore and that the coast guard was unable to find them due to very heavy seas.

Two hours before the crash off the island of Lesvos, a sailboat with 95 people on board crashed on a rock near port of Kythera in the south of the Peloponnese.

In total, during the dramatic operation, when the sailboat hit a steep rocky coast, 80 people were rescued: 62 adults (55 men and 7 women) and 18 children. 79 of them are from Afghanistan and one from Syria. One of the survivors was one of the traffickers and he was arrested on the spot. According to some witnesses, the captain fell into the sea and disappeared on the night of the crash. The 11 survivors were transferred to the island’s general hospital for further medical evaluation.

The boat left the Turkish coast and headed for Italy. Survivors said they paid an average of $5,000 for the crossing and were told there would be no more than 40 people on board.