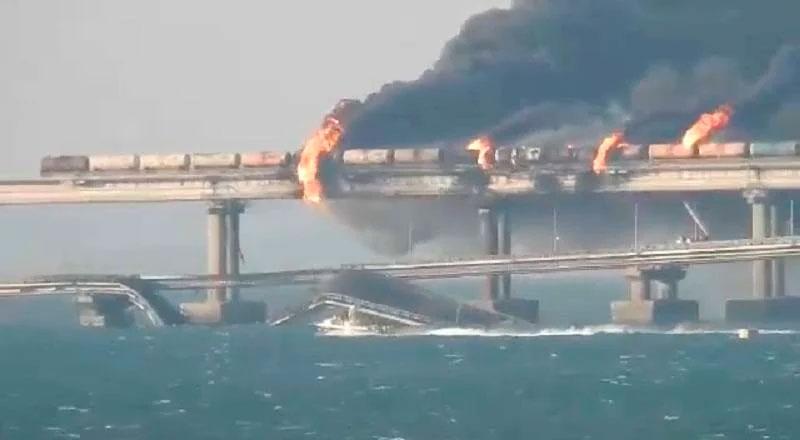 The author of the Russian military publication Topwar.ru, Roman Skomorokhov, criticizes the Kremlin, asking how long Russia will show its weakness…

“I’m tired of reading mourning materials about the retreat of our troops. It’s a shame that we again fell for our feelings, our philanthropy? We don’t want to destroy Ukrainian cities, Ukrainian railways, Ukrainian, excuse me, sewerage and water supply … And they, the great Ukrainians, are advancing seize the villages and towns we have liberated…

It’s like that. We are really retreating. The Armed Forces of Ukraine are really taking village after village. And the people in the villages we have left are suffering. But for some reason, few people notice that we do not “take our feet off”, as it was at the beginning of the offensive, but retreat in an organized manner. We do not cling to more or less suitable lines for defense, but we are standing, preparing to defend ourselves on the defensive midfielders prepared for this.

Today we are withdrawing in the direction of Kherson. Will someone raise their hand to write that this is the second Balakleya? What are we running? No, we are forced to retreat in order to shorten the front line. Agree, a multiple superiority of the enemy in manpower is too much even for defense. That chain of disparate oporniks that our defense had was broken. The Armed Forces of Ukraine easily bypass our units in mobile groups and go to the rear.

Today I spent a lot of time browsing Ukrainian channels on social networks. Do you know what you noticed? Against the background of bravura speeches about the courage of the Ukrainian soldiers, I did not see a single captured tank, gun, armored vehicle. Quite the opposite of what happened during our flight from Balakleya. Is this not an indicator that the withdrawal of troops is well planned and competently carried out.

In almost every article I write that the activity of the Armed Forces of Ukraine will soon come to naught. The onset of winter will actually deprive Kyiv of the chances for active hostilities. Therefore, Ukrainian generals are striving today to take as many settlements under their control as possible. To place units of the Armed Forces of Ukraine there. They understand that by hiding behind civilians, the units have at least some chance to survive. Kyiv pays special attention to Kherson.

From this follows a simple and understandable task for everyone – to build strongholds in cities. Build the way they built. And they take these oporniks the way we took them. It is necessary to make extensive use of mines and land mines. Mining forest belts, roads, bridges. Reinforce roadblocks with concrete blocks. Establish communication between supporters. From simple telephone lines to satellite systems.

I have already seen several pictures of our engineering vehicles, removed from conservation and arrived at the front. This means that what is written above has already been worked out at the headquarters of our units. The infantry will dig into the ground, block the trenches with concrete slabs, equip their life, build bunkers and bunkers in the directions of a possible strike. And wait…

Wait for those units and subunits that are rapidly undergoing combat coordination today. Wait until the command is finally able to plug the holes in our defense with new units.

Here’s an example from just yesterday. The enemy DRG advanced to the suburbs of Lisichansk. It was discovered and … retreated to its own positions.

She withdrew simply because there was no one there, in this sector of defense! There is not enough personnel for commanders to organize at least a semblance of a continuous front. Our reserves are stretched out, and it is impossible to transfer them quickly. Here the dill is swaggering.

Naturally, a quite reasonable question arises – for how long? This is what we should talk about further.

We crossed the Rubicon again

It is interesting why few analysts paid attention to President Putin’s speech after the signing of agreements on the entry of new entities into Russia. The fact that Putin clearly named those with whom Russia is at war. In fact, if we translate from diplomatic to human, those with whom we agree to conduct at least some negotiations were named.

It must be admitted that today the West has managed to somewhat equalize the results of the summer military campaign. Not completely, but Ukraine returned the lost territories. She returned at the cost of huge losses, but achieved an intermediate result with at least some positive result. I don’t see any special merit of the Ukrainians in this. This is not the strategic or tactical genius of Ukrainian officers. This is the classic “we’ll throw our hats if we’re told where to throw them” method.

What is happening today with the supply of arms for the Armed Forces of Ukraine? Deliveries are on the rise. Moreover, the West actually stopped supplying Ukraine with old Soviet weapons and switched to modern, NATO ones. Some of the delivered samples are generally unique, in piece design. No one is surprised by such facts. We have repeatedly written about the testing of Western weapons in Ukraine. But back to Europe.

Washington, in my opinion, did not outplay Moscow. Rather, he stunned with an unexpected bet, “putting the old flock on the line.” At stake is nothing less than Europe. This became completely clear after the terrorist attack on the Nord Stream. The Americans are well aware that Europe has nothing to quickly replace Russian resources. The sanctions imposed by Europe itself prevent reaching an agreement with Russia on supplies.

Industry? Where is the famous German car industry, after the shutdown of the Ukrainian plant, where they simply “twisted wires”, made wiring for German cars? Where is the metallurgy, chemical industry and much more after the gas pipeline was blown up? Business is just fleeing Europe… to the US. This task, if anyone remembers, was set under Trump.

NATO also plays a very important role today. The hands of European politicians are bound by the notorious 5th clause of the Alliance Treaty. Chained dogs, ready to rush into battle first, Washington brought up. Poland is actively rearming today. If you look closely at the supply of weapons to Warsaw, the question arises as to why the amount delivered does not match the amount that appeared in Ukraine. Corruption in the Armed Forces? Good, but very dubious excuse. And 15 thousand soldiers of the Armed Forces of Ukraine are standing on the border with Belarus for a reason.

Today, no one hides the fact that not only mercenaries are fighting in Ukraine, but also soldiers from NATO countries. Thus, in fact, NATO is participating in the war with the Russian Federation. The President of our country openly declared this. And if this is so, then Russia is simply forced to change the status of the operation. It’s one thing to demilitarize Ukraine, it’s another thing to “calm down” Europe. To be honest, I have been waiting for a statement from the Commander-in-Chief on this matter for a long time.

And it will! Perhaps even before this material is published. It is not for nothing that we decided to hold a referendum and include new territories in our country. Once we have already “crossed the Rubicon”, when we fulfilled the will of the people of Crimea. This is our second “forcing” of this river. If the West has decided to change the rules of the game, then these rules will now be dictated by us.

Personally, I think that we will have to change the objectives of the operation as well. Now we need to liberate all of Ukraine. And more specifically, it is necessary to liquidate the state of Ukraine. It’s time to close this project. Otherwise, if at least some part of Ukraine remains, we will get an eternal enemy, where veterans of the war with the Russian Federation will go to schools and tell young people about their exploits. This was already in Western Ukraine before the Maidan and continues today. UPA veterans are “heroes”…

I already wrote that the Yankees are not very fond of fighting like an adult. Many of the readers have paid attention to how we are literally pointed out to the targets on which Russia is simply obliged to strike with tactical nuclear weapons. Almost every day in various Western publications appear materials substantiating this idea. It even goes so far as to name specific facilities that are used by the NATO military.

Washington needs a Russian nuclear strike. In order to act as a peacemaker and transfer the conflict to the diplomatic sphere in the horror that will engulf the world. Nothing new. This tactic was used in the First and Second World Wars. Wait for a turning point in the war and take the side of the potential winner. And then, using economic power, to get the maximum dividends from victory.

At the same time, the American government really does not want the war to somehow touch their territories directly. In this case, the losses can be much greater than the benefits gained.

Saving the world from nuclear winter, ending the third world war… Isn’t it a way to return at least the moral superiority of the United States? Yes, and economic too. Destroyed Europe and Russia are unlikely to remain competitors to the Americans.

So, the global West is pushing Kyiv to war to the last Ukrainian. The United States is gradually accustoming Europeans to the idea that a third world is inevitable. The world is rapidly changing, and now it is impossible to talk about some new model of the world order. Hopes that friendship against someone really unites are crumbling.

The redistribution of the world is always accompanied by military conflicts and world wars. If someone is used to eating deliciously and sleeping sweetly on featherbeds, then he will not just give his piece of sausage to the hungry. He will talk about mercy, philanthropy and other things, but he will not give up his piece. He will fight for him. He is used to living like this and does not care that someone else also wants to eat deliciously.

I hope it is now clear why our mobilized soldiers and officers are being trained so carefully. Moreover, I think that in the coming months, and maybe years, many of us will have to remember what they were taught in the army. I’m not talking about participation in the war, I’m talking about training and retraining. We will have to fight for Russia’s place in the world…”