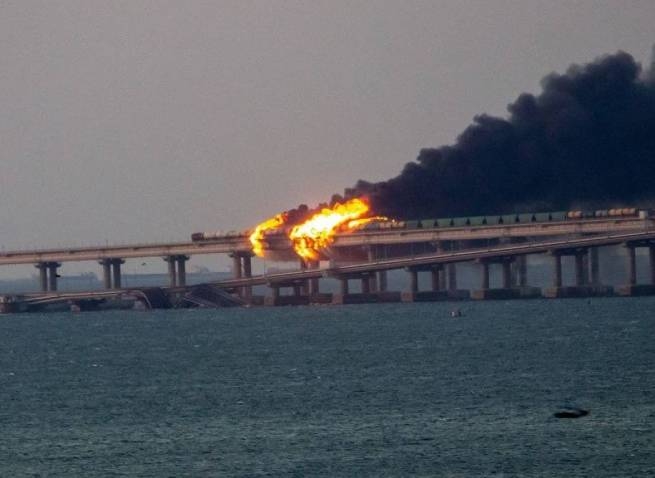 The movement of trains and cars on the Crimean bridge was stopped, the reason was a burning fuel tank on the railway tracks.

As the agency writes RIA News, the incident was reported in the Taman Road Administration. Oleg Kryuchkov, adviser to the head of Crimea, wrote on his Telegram channel:

“Navigation arches are not damaged. It’s too early to talk about the causes and consequences. Work is underway to extinguish the fire.”

The freight train in which the cistern caught fire has by this time been removed from the bridge and delivered to Kerch. The press service of the Federal State Unitary Enterprise “Crimean Railway” reported:

“Emergency work is underway. The causes of the accident are being established.”

By preliminary data, around 6:00 in the morning, one of the wagons of a freight train, which was going from Taman to Kerch, caught fire. The cause of the fire and no casualties were reported. Emergency services are on site.

Residents of Kerch published a video with a fire on the Crimean bridge. According to them, this happened at about 06:00 – part of the crossing was instantly engulfed in flames, a thick column of smoke rose over the place of emergency.

Rosmorrechflot noted that shipping in the Kerch Strait was not stopped.