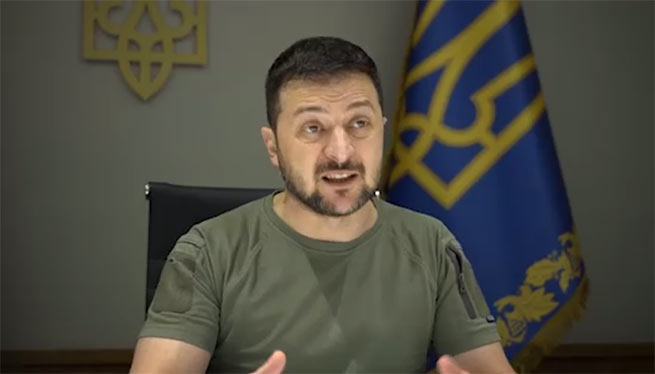 Russian claims that Volodymyr Zelensky is a drug addict seem to be well founded after he called on NATO to launch pre-emptive strikes against Russia.

President of Ukraine Volodymyr Zelensky called on NATO to launch preventive strikes against Russia in order to exclude the possibility of the Russian side using nuclear weapons. This statement was made by the head of the Ukrainian state via video link at an event at the Australian Lowy Institute. A recording of the speech was published on the telegram channel of the Ukrainian president.

In his speech, Zelensky did not specify whether he was referring to the use of weapons against Russia, but one does not need to be 7 spans in the forehead to understand how Russia, which has a nuclear deterrent on full alert, will respond. “What should NATO do? Eliminate the possibility of Russia using nuclear weapons. But what is important, I once again appeal to the international community, as it was before February 24: pre-emptive strikes so that they know what will happen to them if they are used. And not vice versa – to wait for Russia’s nuclear strikes in order to say later: “Oh, you are so, well, keep it from us!” To reconsider the use of their pressure, the procedure for applying it,” the President of Ukraine said.

In Russia, the press secretary of the Russian President Dmitry Peskov reacted to Zelensky’s words. He declaredthat all countries of the world, especially the United States, Great Britain and the European Union, should pay attention to what the Ukrainian president was talking about. According to him, Zelensky’s speech is “a call for the start of a world war.” Deputy head of the Russian Security Council Dmitry Medvedev directly accused Zelensky of called for a nuclear strike on Russia.

It is worth noting that one of basic prepositions Zelensky’s statement that Ukraine is preparing to restore its nuclear potential, and is also participating in joint development of bacteriological weapons with the United States, is considered to be the start of the Russian invasion of Ukraine.

Even then, according to insiders, Andriy Yermak, the head of Zelensky’s administration, who is considered a “grey eminence” who really rules the country, blasted his “boss” for a long tongue, realizing that such statements could serve as Casus belli to start a war against Ukraine . Zelensky’s current blunder may cost him even more, since by doing this he directly exposes his “partners” from NATO, bringing the likelihood of a nuclear crisis to the maximum.

Yermak’s adviser Mikhail Podolyak immediately reacted and tried to disavow the words of the President of Ukraine, saying that he was misunderstood, and in general it was Russia’s fault:

Chergovy Russian fake.
1. The same word in @ZelenskyyUa about a preventive nuclear strike on Russia.
2. Zelenskyy guessing about Russian nuclear blackmail and calling on the world to preventively christen for Russia the consequences and the strength to strike at Russia – sanctions and zbroynu help 🇺🇦.

Another Russian fake.
1. Not a word from @ZelenskyyUa about a preventive nuclear strike on Russia.
2. Zelensky recalled Russian nuclear blackmail and invited the world to preemptively determine the consequences for Russia and intensify strikes against the Russian Federation – sanctions and armed assistance to Ukraine.

Nevertheless, this did not help much … By his actions, Zelensky, in the role of a herald of the global Armageddon, actually ensured panic throughout the world, especially in Europe.

Meanwhile, the command of the US Armed Forces raised the level of combat readiness in Europe to DEFCON-2. Prior to this, such a level of alert was announced only exactly 60 years ago, in 1962, at the time of the Caribbean crisis, and in 1991, during Operation Desert Storm in Iraq. The bad language of a drug addict can eventually become a reason for a global nuclear war. After all, the situation is now too unstable …