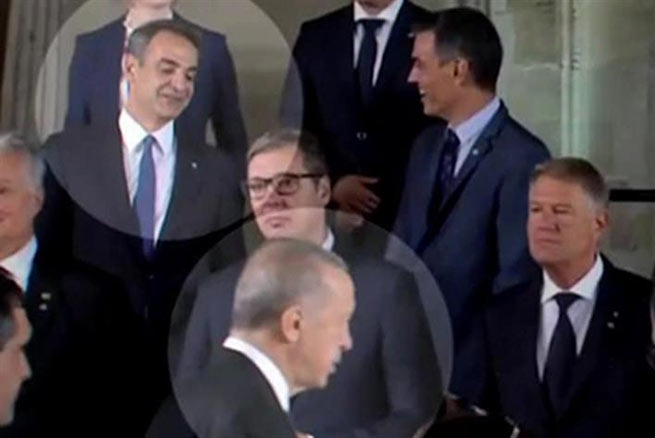 A chilly atmosphere reigned between Turkish President Recep Tayyip Erdogan and Greek Prime Minister Kyriakos Mitsotakis at the European Political Community summit in Prague, where the two leaders didn’t even exchange glances as they headed for a group photo opportunity.

Once again, Erdogan attacked Greece, accusing it of creating tension and provocations in the Aegean. The Turkish president made his accusations also at high-level official dinners and again openly threatened Greece with war, repeating “we may suddenly arrive one night” – a comment that Greek and some other Western officials condemned as a threat to a neighboring state.

According to the Greek media, citing government sources, Erdogan’s statements were not heard both at the meeting of the security group, in which he participated, and at the bilateral contacts, which he held in Prague on Thursday. French President Emmanuel Macron reportedly told Erdogan during the meeting tete-a-tetethat he should abandon the tactics of escalation and follow the path of dialogue based on international law.

The Greek legation was aware that Erdogan asked to speak during dinner. In his speech, he expressed an opinion in which he pointed out the negative attitude EU to Turkey and verbally attacked Greece. Among other things, he said that there was nothing to discuss with Greece at the moment, accused Athens of provocations and creating tension.

This led to a heated exchange with Greek Prime Minister Mitsotakis, who immediately responded that Turkey should stop questioning the sovereignty of the Greek islands in the Aegean. He also urged Erdogan to refrain from further provocations and said that there should be communication and dialogue without excessive rhetoric, as responsible leaders should do.

Turkish media reported on Friday afternoon that Erdogan was furious at Mitsotakis’s response, saying, “I don’t know who gave Mitsotakis permission to answer me. I won’t stoop to his level.”

This did not stop Erdogan from continuing his attacks on Greece at the press conference that followed. “They are not where they should be,” Erdogan said. – Their whole policy is based on lies, they are dishonest. We have nothing to discuss with Greece.” Threatening Greece with a night invasion, he said that he did not question the sovereignty of the Greek islands, it was Greece that did not enter into dialogue. Erdogan said Athens understood Ankara’s message when Turkish officials said “we may suddenly arrive one night.”

The Greek side confirmed that their position is known and no one can question the sovereignty of Greece over the islands of the Aegean.

Kyriakos Mitsotakis, after the end of the summit in Prague, during dinner, approached Ursula Von der Lazen and told her that he approached Erdogan: “I got up and said to his face what I wanted to say.”

By chance, there was a camera nearby … Do you believe in this?