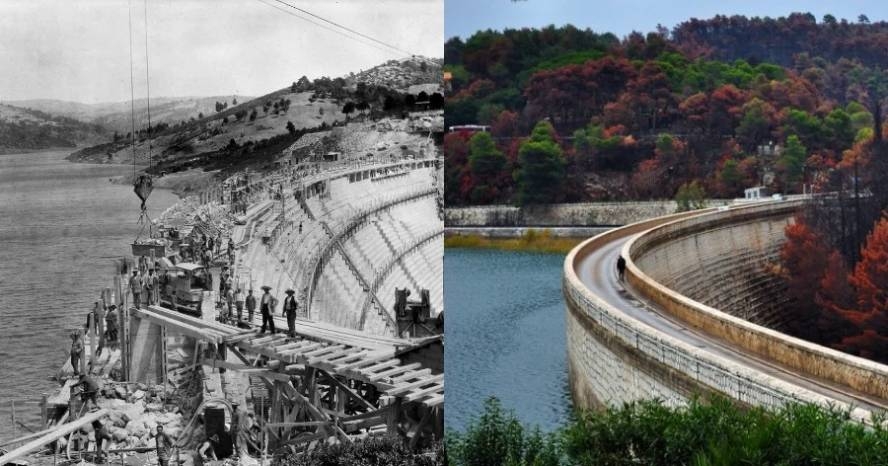 Marathon Dam is an ideal destination for a day trip, with not only a picturesque scenery, but also a great history.

A few words about the history of the dam: thousands of years ago, according to mythology, the goddess Athena and Poseidon competed for who would become the protector of the city. The townspeople chose the goddess Athena, naming the city after her, and Poseidon doomed the city to water shortages. Since then, water shortages in Athens have been recorded up until the construction Marathon Dam (Φράγμα του Μαραθώνα).

The structure has a height of 54 meters and a length of 285 meters. The blocks consist of special concrete (slabs), which are made from marble chips, cement and volcanic ash. As a result of the construction of the dam, an artificial lake Marathonas (Λίμνη του Μαραθώνα) was created at the confluence of the Haradros and Varnavas streams, with an area of ​​44,000,000 cubic meters of water.

During this period, the population of Athens grew as refugees who arrived in the country after the catastrophe in Asia Minor found refuge in the capital of Greece. The need for the city’s water supply increased, and in 1925 the Greek the state signed a contract with the American construction company OULEN and the Bank of Athens to finance water supply projects.

The Hellenic Water Company was then formed and was responsible for supervising the work. The largest of these was the Marathonas dam. It is a colossal project that took three years to build and employed about 2,000 people who were fed and housed for free.

The dam was completely lined with Pentelian marble, which was abundant in the area and associated this large-scale project with ancient Greek culture. A water tower was also built of marble and, of course, the nearby temple. The cladding of the dam with Pentelian marble, like the Parthenon, is a world exclusive attraction.

Thousands of women were hired to process the marble and worked day and night. The project was completed with the construction of the 13.4 km Bogiatio Tunnel (Μπογιατίου), which brought water from the lake of Marathon to Athens. About 450 people were to work to open the water tunnel. Work ended in 1931 and Attica finally “quenched its thirst” after centuries of water shortages.