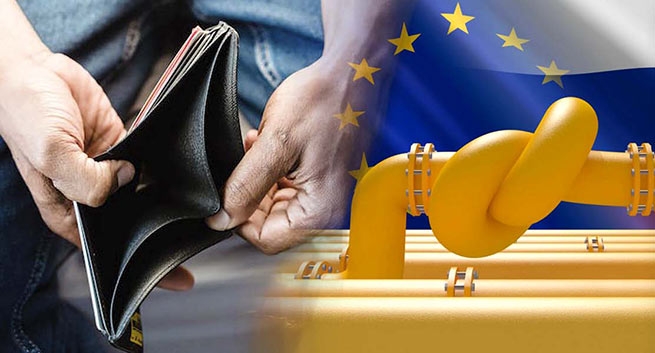 The citizens of Greece are ready for mass protests, daily faced with a rapid rise in energy prices as a result of sanctions against Russia, which K. Mitsotakis decided to impose.

The Prime Minister placed Greece in the “framework” not just in the framework of “unfriendly countries”, but recorded Greece in the camp of “hostile countries” in relation to Russia. Speaking on the Bloomberg channel and speaking about Turkey and R.T. Erdogan, he said: “We do not need another source of geopolitical instability in the Eastern Mediterranean when we are at war with Russia and we are trying to support Ukraine.”

Since the summer, large-scale protests against savings have been held in many countries of the world, Europe is “boiling”.

The “wave” of protest has already “covered” Austria, Spain, the Netherlands, Germany, France and Great Britain and reached Greece: the inhabitants of Kastoria loudly shouted “no” to the unbearable burden that they are offered to bear.

At noon on September 5, hundreds of residents gathered outside the regional government building in Kastoria, demanding lower energy and fuel costs, which have reached unimaginable heights as a result of the government’s policy on the Ukrainian issue.

With the main slogan: “Kastoria is dying. Does anyone hear this?”, citizens protested against the deterioration in the quality of life and the impoverishment of a large part of the population due to the energy crisis.

This was followed by a symbolic procession to the branch of the State Energy Corporation ΔΕΗ in protest against power outages for needy and helpless families.

It is worth noting that Kastoria is one of the regions of Greece most affected by the sanctions. The whole problem is in the fur coat business, which was already in a not the best position due to covid, and after the imposition of sanctions against Russia, it “fell” completely.

According to traders in this industry, the decline in sales was more than 90%. The vast majority of enterprises in the industry are closed, employees are sent on indefinite leave …

This rally is expected to be a “prelude” to subsequent similar demonstrations across the country if the government continues its gratuitous anti-Russian policy.

And all this at a time when the country is experiencing energy problems, and as a result, citizens are forced to endure constant unannounced power outages, which they call … “maintenance”!

At the same time, scenarios for changing store hours to save energy create informal lockdown conditions.
EU remains silent, and instead of considering any compromise solutions, he proceeds to introduce new sanctions against Russia, adding fuel to the fire.