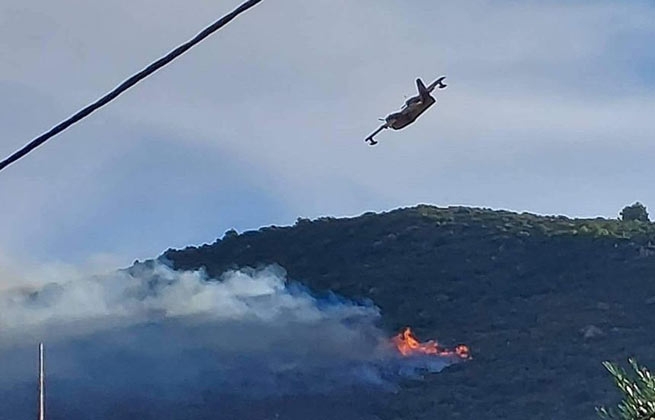 Since 4 pm on Monday, a large forest fire has been raging in a remote area on the island of Zakynthos. Firefighters, using ground and air forces, are trying to put out the flames and prevent them from entering residential areas.

Large groups of firefighters are fighting a fire in the Galaros region, where the flames are burning forest land.

The fire broke out in the forest of Vlacheina Galaros and spread to two fronts: one to Lagkadakia and the other to Koiliomeno. Firefighting aviation, which is at the forefront of the fight against fire due to difficult terrain, was forced to stop their work with the last rays of the sun.

According to the first assessment of the chairman of the community of Galaros, half of the forest land burned down, according to local media imerazante.gr. And ermisnews.gr reported in the early evening that the fire had already destroyed a large area of ​​virgin and regenerating forest, and was moving away from settlements. According to the latest information, the front of fire, which was one of the two remaining, was limited around 19:30. However, due to unfavorable weather conditions, the fire continues.

Despite the fact that October is not considered the peak of the fire season, there have been 133 forest fires in the last 24 hours, ANT1 TV channel reports. The fire department attributed the high numbers to the high temperatures of the past few days, as well as strong winds.