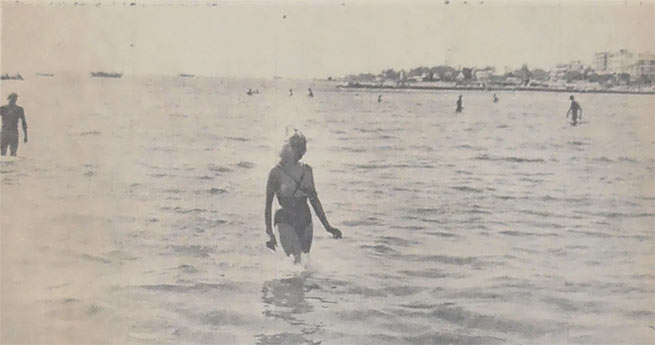 Swimming topless doesn’t really shock anyone these days, but in Athens in 1964 it was a serious challenge…

Topless fashion came to Greece from Western Europe. More and more women were turning away from the bra, which they saw as another form of oppression.

On July 27, 1964, in Glyfada, a young and beautiful girl went to enjoy the sea at about 4 pm. She went to the dressing booth and soon came out in a dressing gown.

At some point, she took it off and remained in a bathing suit with straps, but with bare breasts. At the time, the beach was crowded, and besides, it was Saturday. In less than a few minutes, the first person called out to her: tOples, topless, topless… 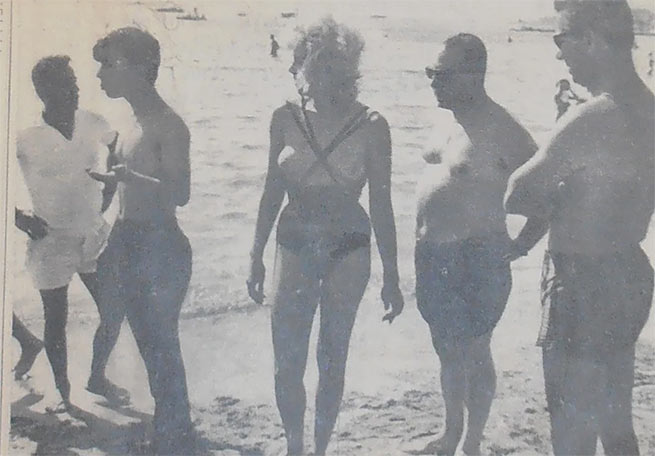 That’s all! The newspaper “Apogeummatini”, which attended the event with a photographer, gives a vivid description.

“Soon, the beautiful Athenian was surrounded by curious people who wanted to admire her swimsuit and her beauty. Almost immediately, a beach employee ran up to her and politely asked her to put on a bathrobe.

“I have never seen a sign saying ‘No Topless’ anywhere,” was the disarming reply… 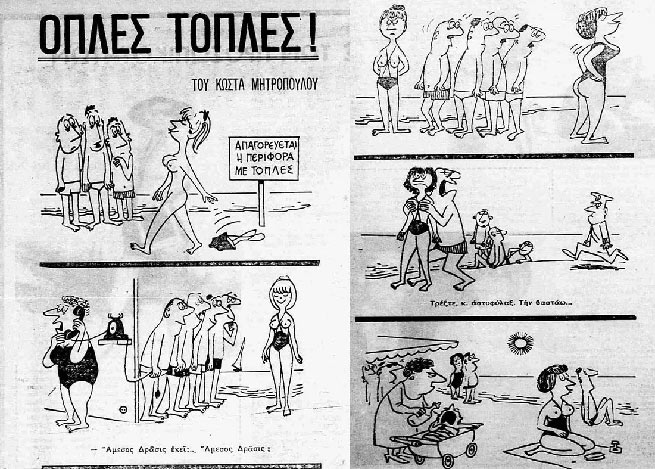 This is how the Greek cartoonists reacted to the incident

Shortly thereafter, as more and more people gathered around her to find out how the story would end, a policeman showed up and asked her to follow him to the station. 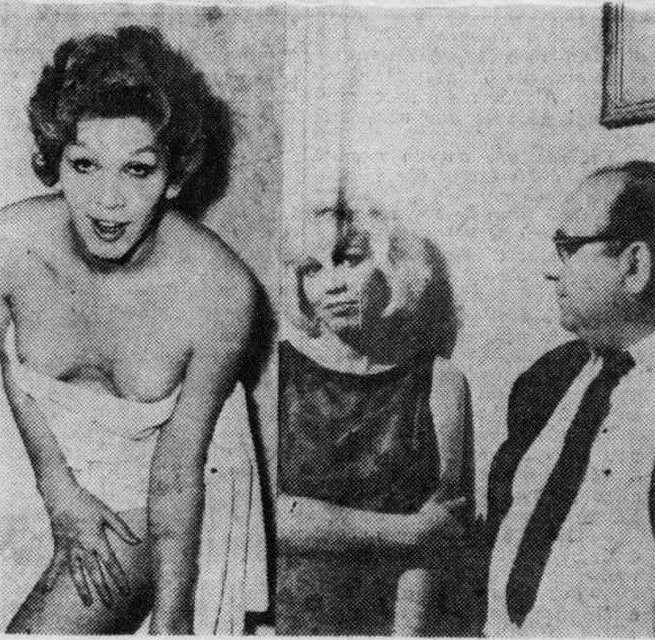 As we read in the newspapers of the time, the young Athenian was a stripper named Themis. She was taken to the Glyfada Police Department, where duty officer P. Karmpis referred her to the court of first instance. At that time, Saturday was not a holiday. All services were running normally. In fact, another court was interrupted for the trial.

Four employees of the company that operated the beach testified. According to the constable accompanying the girl, none of the bathers was allowed to testify.

“She was wearing black swimming trunks and two suspenders, Your Honor. Nothing else,” said the first witness.

“How did the bathers react?” the defendant’s lawyer asked.

“What can I tell you. Some applauded, others protested, mostly women with small children.” Accompanying Themis D.M. said: “We went swimming, not to make a scandal.”

Prosecutor Papadoyiannis delivered a fiery speech: “We must save the Greek family, the morality of the country from this new, miserable, terrible fruit that has come to us from America, which, although it is one of the most democratic countries, nevertheless, unfortunately, social anarchy reigns in it … “.

The court sentenced Themis to three months in prison with the right to ransom for 100 drachmas a day. She appealed and was released.

There was…an uproar, there were exposés (literally…) in the newspapers on Monday, and the newspapers of Thessaloniki reported that three girls in the city decided to swim topless on the same Saturday, but on deserted beaches!

However, on the beach in Varkiza, another Athenian was swimming topless on the beach, no longer attracting a large number of spectators… 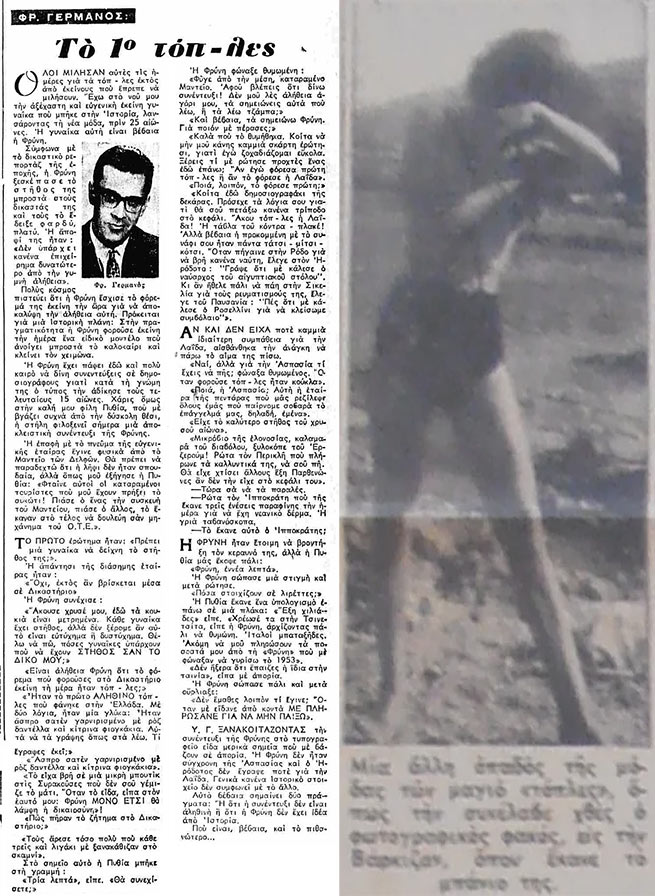 Freddy Germanos from Mesimerini’s columns commented on the incident in his own way. He was followed by Kostas Mitropoulos in Tachydromos with five Spartan sketches. 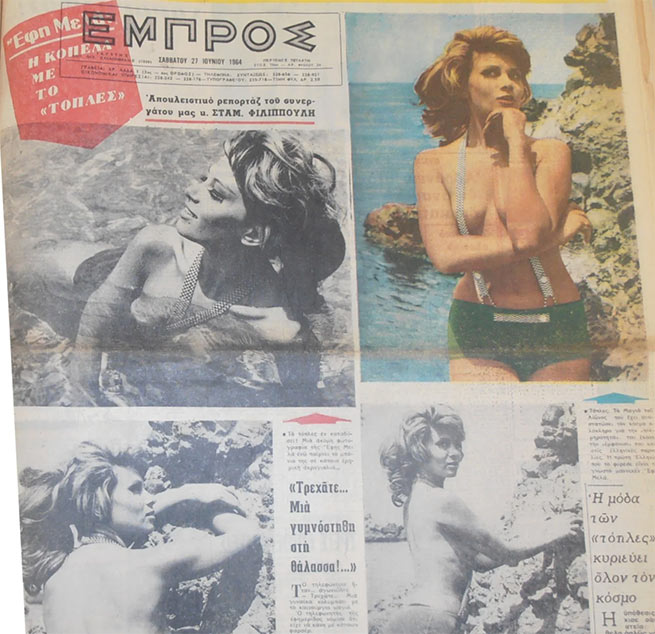 The answer to Themis was given by the weekly newspaper Embros a few weeks later. It featured the most famous model of the time, Efi Mela, wearing a similar topless swimsuit. And since there was a press law, she made sure to show (or rather not show … show) … “hot spots” in the numerous photographs that she published on the front and inside pages.