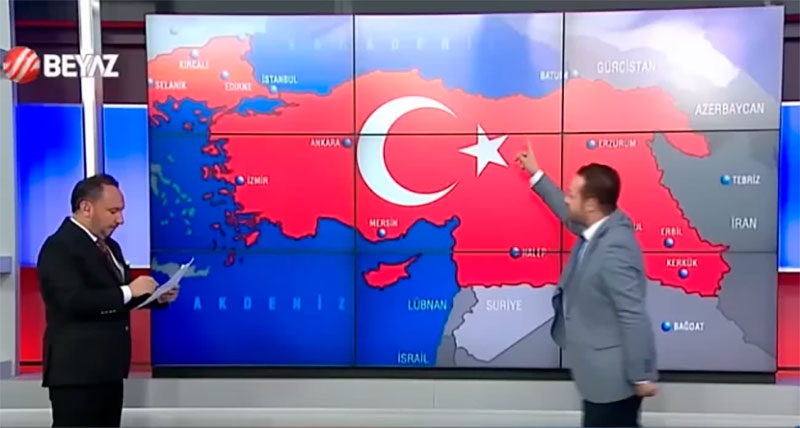 All that we have heard from the Turks about what they think about their … “empire”, revealing their dreams of Turkish domination in the Aegean, Black Seas and the Eastern Mediterranean, was told by a Turkish analyst who “revealed” the supposedly secret map of Turkish conquests, including part of Greece, Armenia and … Crimea.

“This card was a leak”

The messages were made during a broadcast on the Turkish Beyaz TV channel and during a discussion between the presenter Turker Akinci and Turkish political analyst and author Engin Avtzi.

“What will be the borders of Turkey in 2025 and how is it predicted?” the host asks at one point, to which the analyst replies, “That card was a leak. Hold it, sir!”

And, as reported tourkikanea.grhe explained that “Here [показывая на Грецию] the process will start from Thessaloniki, and we will even have our own coast opposite, since the process of returning the Crimea to Turkey is underway. Crimea will come under the full control of Turkey”.

He also claims that “Armenia will be fully connected with the Turkish world, and like Armenia it will become smaller.” He continues: “In Syria, at the moment there are plans to create a Turkmen Republic, you know that there is an agreement on this.”

“The process will start from southern Cyprus.”

He then points to Cyprus and then to the islands of the Aegean. “You see here. Where, my lord, cannons will appear FIRTINA? Exactly. First, it will start from southern Cyprus,” he says.

Add: “If you see that Turkey captures southern Cyprus in one day, it will be ours for a long time.” He concludes: “That is, the Aegean, Black Sea and Eastern Mediterranean will be completely turned into a Turkish lake, this will be our map in 2025.”