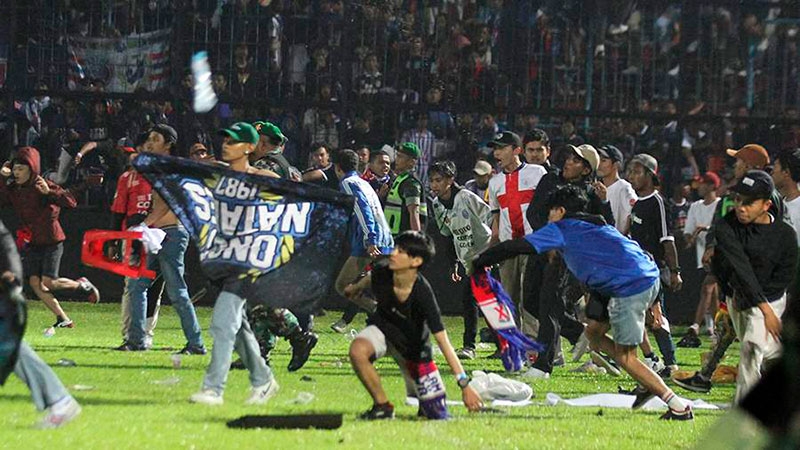 One of the biggest tragedies ever to hit the sports world took place in Indonesia, where at least 174 people were killed during a football match between Arema and Persebaya Surabaya in East Java.

The tragedy occurred after the final whistle sounded to end the match, which was won by the Surabaya team.

Fans broke into the stadium, destroyed the field and clashed with police officers. They used tear gas to scare them off, but ended up causing a panic. As a result, dozens of people were trampled to death or died of suffocation or serious injuries.

According to local media, among the dead, in addition to fans and police, were children.

It is noteworthy that after the final whistle, when “Arema” won with a score of 2:3, the fans took to the field of the stadium “Kanjurukhan” and clashed with the police authorities.

The police used tear gas to stop the fans, hundreds of whom lost consciousness and fainted.

What followed was chilling, the clashes were violent and two police cars were burned to the ground.

“There was anarchy and chaos. They started attacking the police, breaking cars … We want to say that not all the fans behaved like anarchists, but only those 3,000 who entered the stadium,” the East Java police chief said after the tragedy. Niko Afida. At least two police officers were killed in the riots, he said.

Another instance of police and military brutality at the same football match turned disaster in Indonesia. At least 180 people died – many of whom were children.

“We would like to report that not all of them were rioters. Only about 3,000 people took to the field,” he said.

Fans who ran away “gathered in one place at the exit.” There was a crush, many had shortness of breath, there was not enough oxygen,” he added.

FIFA has warned that chemicals should not be used to control crowds at matches.

Violence on the pitch is nothing new in Indonesia and the two teams that played yesterday are longtime rivals. Persebaia fans were banned from purchasing tickets for the match due to fear of clashes.

The security minister wrote on Instagram that 42,000 tickets were sold for the match at the 38,000-capacity Kanjurukhan Stadium.

Indonesian President Joko Widodo has ordered the authorities to thoroughly review security measures at football matches. He also asked the country’s Football Federation (PSSI) to halt Ligue 1 matches pending an investigation and wished it was “the last football tragedy in the country”.

#Breaking: Update – Other shocking video footages showing you the chaos inside of the hospital, after riot police cornered fans of the #football game, tear gassed them extremely and had no place to run, killing 153 people injured 300 others in #indonesia. pic.twitter.com/fx2ndUzd4R

At least 300 people were reported injured.