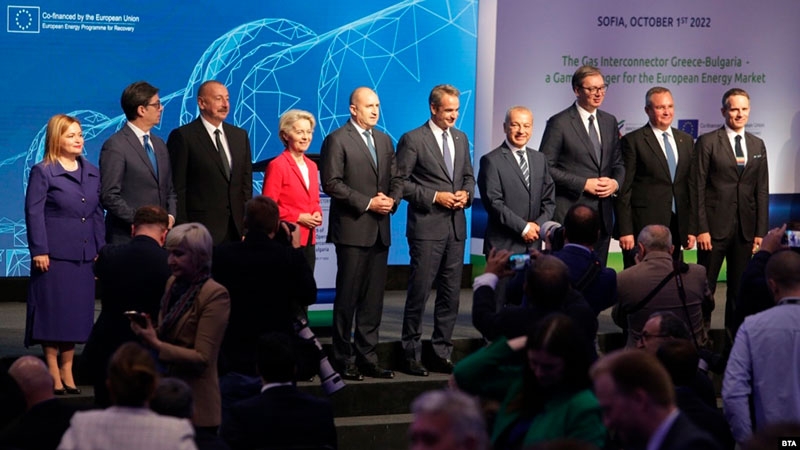 On Saturday, the gas pipeline from Greece to Bulgaria was officially put into operation. The solemn ceremony in Sofia was attended by the head of the European Commission Ursula von der Leyen, the presidents of Bulgaria, Serbia, North Macedonia and Azerbaijan, the heads of government of Romania and Greece.

Through the new gas pipeline, Bulgaria will be able to receive from 3 to 5 billion cubic meters of gas from Azerbaijan, as well as liquefied gas from Greece, from the LNG terminal in Alexandroupoli.

The Greece-Bulgaria interconnector makes our country less vulnerable. This was stated by Prime Minister Gylyb Donev at the official commissioning ceremony of the Greece-Bulgaria gas connection, which took place at the National Palace of Culture in Sofia. According to the Bulgarian prime minister, the new gas pipeline has sufficient capacity to meet all needs and ensure the diversification of sources and supplies of natural gas to Bulgaria. This is of key importance for the country’s energy security, Donev stressed.

In his speech at the ceremony, he noted that the new building will bring serious economic benefits to our country, and the project itself has become proof of responsibility and solidarity between Greece and Bulgaria, BTA reports. In addition, according to Gylyb Donev, the interconnector will ensure the transportation of natural gas to Romania, Moldova, Ukraine and Central Europe.

One of the goals of the project is to reduce Bulgaria’s energy dependence on Russia. Von der Leyen drew attention to this in her speech, who called the launch of the gas pipeline a “turning point” for Bulgaria’s energy security and the “beginning of a new era” for the country and all of Southeast Europe. “It means freedom from dependence on Russian gas,” said the head of the European Commission. “In Bulgaria and all over Europe, people are feeling the consequences of the war unleashed by Russia, but thanks to such projects, Europe will have enough gas for the winter,” she stressed.

3 billion cubic meters of gas is practically the entire annual consumption of Bulgaria. The capacity of the gas pipeline may be increased to 5 billion cubic meters in the future, which will allow delivering gas from Bulgaria to other countries, in particular to Romania, Moldova or Ukraine.

The construction of a 182-meter gas pipeline from the Greek Komotini to Stara Zagora was launched in 2019 and partially financed from the EU budget.

The launch of the gas pipeline took place against the backdrop of a major accident on the Nord Stream gas pipelines, which is called the result of sabotage, and the cessation of Russian gas supplies to a number of countries EU.

On Saturday, the Italian company Eni announced complete cessation of gas supplies from Russia: “Gazprom” allegedly notified her of the impossibility of gas transit through Austria. Gazprom claims that it was unable to deliver to Italy on October 1 because the Austrian operator refused to confirm the transportation of the declared volume. When deliveries will be resumed is unknown.