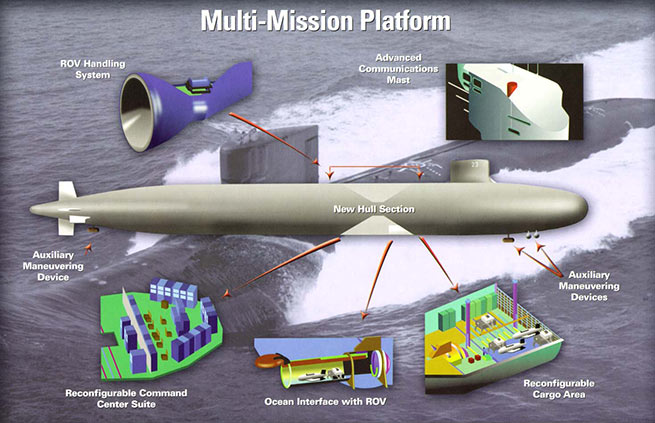 Underwater explosions on the Nord Stream 1 and 2 gas pipelines, which all officials believed were acts of sabotage, were likely caused by US mini-submarines that were flown there by the Seawolf-USS Jimmy Carter (SSN-23) class submarine.

The US was interested in this, on the one hand, permanently cutting off Europe from any deal with Russia, and on the other hand, because it would be a win-win situation for American LNG companies, since the “energy bridge” with Russian energy fields would be finally closed. .

Poland’s former minister of national defense & foreign minister has posted “Thank you, USA” with a picture of the Nord Stream gas leaks pic.twitter.com/VIAV86GwGg

In addition to the fact that the Poles confirmed the actions of the United States in a tweet, there are objective facts. But how can the US carry out such a diversion? Do they have the necessary funds? The answer sounds like USS Jimmy Carter (SSN-23), a converted Seawolf-class nuclear attack submarine.

Is there an explanation why Russia would destroy its own pipelines? Harms Europe, yes, but benefits Poland and the US, and diminishes Russia’s future opportunities. I can believe it, but I’m curious why people believe this (and why Tucker believes otherwise).

Biden did it. With the Seawolf Class USS Jimmy Carter having specific capabilities to do deep water cable tapping and sabotage.

Biden had both motive and opportunity.

Biden did it. The American Seawolf-class submarine USS Jimmy Carter has special capabilities for deep-sea wiretapping and sabotage. Biden had both motive and opportunity.

USS Jimmy Carter (SSN-23) is about 33 meters longer than other boats in the class, due to the addition of a section called MMP or Multi-Mission Platform. Submersible vehicles, such as SEAL or ROV vessels, are launched from it.

The construction also provides for the creation of a corridor through an additional section about 33 meters long, so that the crew can move inside the submarine, and at the same time there is a place to store submersibles.

The ship has a total displacement when submerged 12,139 tons, a length of 138 meters, a crew of 141 people and a maximum speed when submerged 40 knots.

Such a vessel, having launched its mini-submarines, can deal a crushing blow to underwater pipelines.

*If* we did it, then it probably was the USS Jimmy Carter. That sub has a very interesting history and is dedicated to intel and sabotage ops. https://t.co/z9jv9f4qnB

“If” we did it, then, most likely, it was the USS Jimmy Carter submarine. This submarine has a very interesting history, and it is engaged in reconnaissance and sabotage operations.

This is not the first time an underwater operation of this magnitude has been carried out. In the early 1970s, the US government discovered the existence of a submarine cable in the Sea of ​​Okhotsk connecting two of the main Soviet naval bases: the Petropavlovsk base on the Kamchatka Peninsula and the headquarters of the Soviet Pacific Fleet in Vladivostok. The problem for the United States was that at that time the USSR considered the Sea of ​​Okhotsk to be its national territorial waters, having installed an underwater network of hydrophones to detect underwater intruders.

There were also a large number of ships on the surface patrolling the area. In October 1971, the US Navy submarine USS Halibut (SSGN-587) entered the Sea of ​​Okhotsk, divers found a submarine cable and attached a 6.1 meter long device to it that could intercept data. The listening device did not have the ability to transmit data, all information was recorded on a magnetic medium. Once a month, divers were brought to the site to extract the tape and install a fresh tape.

An analysis of the recordings showed that the Soviet command was so confident in the reliability of the cable that most of the messages were transmitted in unencrypted form. Thus, American intelligence gained access to secret information from the main base of the SSBNs of the Soviet Pacific Fleet.

In 1980, an NSA officer Ronald Pelton passed information about the operation to the KGB residents in the United States, and in 1981 the listening device was dismantled by the Soviet side.