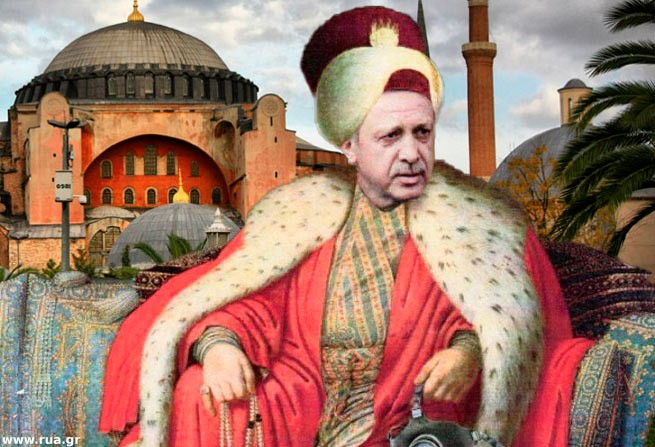 Kizer teaches Ottoman and modern history at the universities of Zurich in his native Switzerland and Newcastle in Australia, and is considered one of the most respected authorities on contemporary Turkey. He deeply studied the Treaty of Lausanne and soon published a book on the subject, and is the author of Talaat Pasha: Father of Modern Turkey, Architect of Genocide, which was published in 2017 by Princeton University.

Over the past five years, the Lausanne Treaty of 1923 has been publicly challenged by Turkish President Recep Tayyip Erdogan. However, Greece and the Western Powers show no appetite for its revision and consider it the basis of their relations with the Republic of Turkey. Do you think openly challenging the treaty with force could be an important part of Erdogan’s 2023 re-election efforts?

Erdogan’s challenge to the Lausanne Treaty goes back a long way and is linked to his Turkish-Islamic roots. He highly appreciated the author of an influential book against the Lausanne Treaty, who took most of his arguments from the memoirs of Riza Nur, Ankara’s deputy plenipotentiary in Lausanne. Subsequently, Nur quarreled with Atatürk. For more context, let’s take a quick look at the early 1920s and the formation of the Republic of Turkey, for which the Treaty of Lausanne is considered an international “birth certificate”.

Under the banner of nationalism, the Ankara-based republic emerged from warring Muslim communities. In her war for exclusive rule in Anatolia, she had the critical support of the Bolsheviks. Prior to this war, the dictatorial Young Turkish Party-State that ruled the Ottoman Empire had lost the First World War. Most of the cadres in Ankara were former Young Turks, many of whom took an active part in the Armenian genocide during the First World War.

From the very beginning of its existence, the state formed by the National Assembly of Ankara did without a democratic social contract and did not want real democracy. Turkish Muslim identity and loyalty to Ankara’s rule was paramount. The democratic contract was to be enshrined in a constitution based on consensus and on a broad basis.

Of course, without a solid constitutional foundation, nationalist politics had no compass. Therefore, they repeatedly strayed into crises, authoritarianism and economic collapses. The Republic never came to a peaceful rest within itself.

In the 1920s, the state received a huge amount of so-called “abandoned (Christian) property” that Western diplomacy left to Ankara under the Lausanne Treaty. After World War II, Western states and institutions came to the aid of a strategic partner in its repeated financial crises. Already during and for decades after the Lausanne Conference, Turkey remained gripped by coercion and violence. In some parts of the country, a state of emergency was almost constantly in effect. Yet despite this, the Treaty of Lausanne virtually secured peace with its neighbors during the 20th century.

Caricature depicting Erdogan as the Turkish Sultan. Appeared after Erdogan turned Hagia Sophia into a mosque.

Things have changed dramatically under Erdogan and his ruling alliance in Ankara since 2016. Islamists and ultra-nationalists have long deplored the times of the Ottoman Empire and therefore sought the maximalist implementation of the so-called National Pact (Misak-i Milli). They wanted Ankara’s unitary rule throughout Asia Minor and some neighboring countries.

In this vein, since 2016, Erdogan has embarked on an active revision of the “Lausanne borders” through war and invasion. The Lausanne Conference approved the National Pact in a moderate version, through compromises, in particular, on Mosul, Northern Syria and the islands of the Aegean Sea. Although Nur is proud of his accomplishments in Lausanne, he sympathizes with the maximalists.

Deprived of genuine democratic powers and a peaceful strategic compass, the populist autocracy seeks salvation in repression, aggression and the expansion of Turkish-Islamic influence.”

Thus, the approaching elections of 2023 are not the cause, but the catalyst of a possible accelerated forceful revision, at least rhetorically. Of course, along with other important factors such as low poll ratings, astronomical inflation and a decline in faith in society.

The political picture is simple: Lacking genuine democratic powers and a peaceful strategic compass, the populist autocracy seeks refuge in repression, aggression, and the expansion of Turkish-Islamic influence. The revision also focuses on the South Caucasus, including Armenia. Unlike the Paris-Sèvres Treaty of 1920, replaced by the Treaty of Lausanne in 1923, the region was no longer on the main agenda in Lausanne. The Bolsheviks and Kemalists divided it between themselves by 1921. Left without the United States, the League of Nations did not have powerful partners ready to intervene in a timely manner in favor of Armenia supported by the League.

The Armenians were a favorite enemy and irritant of the Turkish nationalists even before the Greeks. Compared to Greeks, Armenians are much more vulnerable. The inciting and exploitation of nationalistic emotions is still politically paid by Turkey, just as it was in the 20th century.

Do you see Turkey’s revisionist behavior as a by-product of the Erdogan era destined to disappear after his final retirement from politics, or is Turkey a classic example of a rising power demanding a rethinking of its relations with its neighbors and striving for a new role in the regional and global balance of power, regardless of your leader?

I see Turkey’s revisionist and expansionist behavior less as a quasi-logical search for a new role in a changing world – which it certainly is in part – but as a dangerous substitution.

Re-emerged persistent, but poisonous chimera “Great Turkey”. As during the crises after the Young Turk Revolution of 1908, this chimera again replaced the true tasks and challenges. In short, the point is that Turkey is moving away from the path to democracy, internal peace and democratization in the Middle East.

By the mid-2010s, Ankara had finally changed its political vector. Its autocratic populism has given way to the temptations of Islamism and far-right nationalism, with disastrous consequences at home and abroad. We see unhealthy – i.e. compensatory – non-democratic nationalism and among the opposition parties. Ultimately it has to do with the way the Lausanne Conference endorsed Ankara’s rule, which is blatantly anti-democratic birth defects, including a fatal disdain for minorities and impunity for crimes against humanity. Most of the current opposition parties not only failed to effectively resist the repression and militant policies of the regime, but also largely rallied around its nationalist warmongering and anti-Kurdish, and since 2020 anti-Armenian, hate propaganda.

There are wise and courageous exceptions, above all those who belong to the HDP, a few also from the CHP and minor parties, or voiced by prominent and persecuted people such as Osman Kavala.

Do you think that the strengthening of the US strategic presence in Greece sidelines Turkey and reduces its strategic importance to NATO, thus forcing Turkey to choose between being reduced by the West to the level of a pariah state, or realigning itself to work in the alliance?

Russia, Turkey and Iran are currently the strongest anti-democratic states in countries close to Europe. Unfortunately, NATO has so far contributed little to real democracy (except for Serbia in 1999, editor’s note), except in Eastern Europe. For Turkey, the decisive issue is not only the possible resubordination of NATO to the Alliance, but, above all, the acceptance or open rejection of democratic values.

It has been the “Gretchenfrage” of Turkey since late Ottoman times. This, of course, is related to the question of where Turkey wants to be. Rejection does not mean automatic transformation into a “rogue state”, as we see in the example of the West’s relations with Saudi Arabia and other autocratic monarchies of the Persian Gulf.

On a global scale, we now more than ever clearly see the polarization between democratic and anti-democratic forces. The war in Ukraine has opened the eyes of many people and politicians to this division and the need to take a stand. Nancy Pelosi, Speaker of the US House of Representatives, made this issue crystal clear during her recent speeches in Yerevan and Taiwan. Democrats must do their part to rediscover democracy and relearn how to own democracy within a country and in relations with other countries. Apart from strategic decisions, this includes all aspects of social justice.

The disillusioned European view of Putin’s Russia, the US and Israeli withdrawal from Turkey to Greece and Cyprus, and continued Western support for Kurdish “democratic” forces in Syria are among the many signs of this recent learning process.

Given that the Western powers are actively thwarting Turkey’s expansionist ambitions in the Aegean and Cyprus, what are the chances that Turkey will try to adjust to the Western consensus, and what are the chances that Turkey will be actively involved in the conflict? In other words, with Biden in Washington and Macron in Paris, does Erdogan stand a chance if he continues to openly challenge the status quo in the Eastern Mediterranean?

Ankara’s military rhetoric and the creation of tensions are largely intended for domestic consumption in the crisis-ridden country. In this regard, NATO and EU have long allowed the Turkish president to be led by the nose.

However, the desire for war is always a real risk in the presence of dictators who politically have their backs to the wall. The AKP-MHP regime in Ankara has so far limited its armed aggression abroad to places where it has to deal with clearly weaker and less well-armed adversaries. It was the Kurds in Syria and Iraq, or – hand in hand with Baku – the Armenians, whom Putin supports, at best, sluggishly. In addition, Erdogan was greatly helped by President Trump’s irresponsible weakness for him until 2020.

At present, there is no real chance that Turkish forces will successfully engage in an armed conflict against Greece. As you point out, the leadership in Washington, Paris and other democratic capitals would not hesitate to support a side that is facing aggression and is on alert.

Of course, there is a legitimate need for intelligent communication and negotiation between adults on many issues relating to the Eastern Mediterranean – from the settlement of the situation in Cyprus and the security of the Greek islands to migration, ecology and fair shares in the exploitation of resources and pipelines.

If the revisionist dreamers of a Greater Turkey begin to question the Lausanne borders, they are one-eyed. They open Pandora’s box, which turns against them. In the newly opened box are the Kurdish, Armenian and Rum questions suppressed by the Lausanne Conference. This will call into question the foundation and legitimacy of the Republic of Turkey itself, as defined by the Treaty of Lausanne. Dreamers overestimate their capabilities, they recreate all too well-known crises. It is true that crises are the atmosphere necessary for the survival of Ankara’s volatile political style.

The time has come to respond to the real challenges of the region after Lausanne. Democracy in the full sense of the word is the decisive criterion for lasting progress. It includes the rule of law, freedom of speech, social solidarity, and the fundamental acceptance of “others” within and beyond national borders (for Democrats, of course. Editor’s note). Is Turkey ready for a radical turnaround and a return to democracy? Turning towards Asia, she will become even more unhappy than she already has if she continues to live without renewing ties with Europe. It needs to radically get back on track where it went astray after promising steps in the early 2000s.