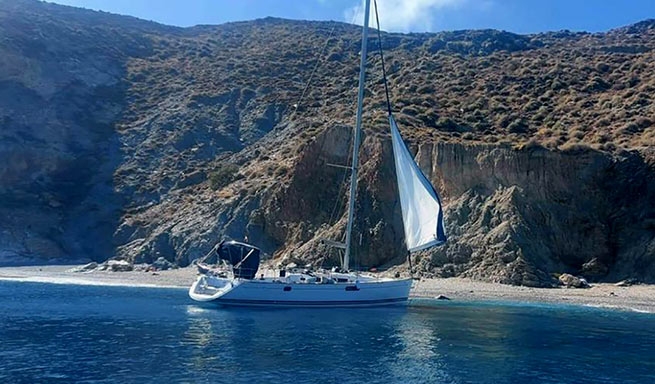 The stranded yacht was spotted Wednesday afternoon on the island of Folegandros. 37 illegal migrants sailed to Italy on it. It is reported that illegal immigrants scattered around the island, but were detained by the coast guard and taken to the port authority of the island of Ios.

According to the Coast Guard, a sailing ship that was transporting migrants from the coast of Turkey to Italy was found stranded and abandoned in the KATERGO water area. Local residents suggest that illegal immigrants lost control in a difficult area for navigation and ran aground, where they damaged the ship.

The persons on board the yacht dispersed around the island, hiding from the police. Nevertheless, they were found, collected, and on Wednesday all the travelers were taken by a passenger ship (under the protection of police officers) to the island of Ios.

At the same time, it turned out that they paid 10,000 euros each for their transportation to Italy and, apparently, were very upset that the trip was not successful.

Full text of the statement from the Ministry of Shipping and Island Policy:

“Thirty-seven (37) foreigners were discovered yesterday at noon by the officials of the port station of Folegandros.

In particular, the above-mentioned (23 men, 5 women, one of whom was pregnant, and 9 minors) were inland, in the areas of “KARAVOSTASI” and “LATINAKI”, and the civil sailing ship that transported them, departing from the Turkish coast and heading for Italy , was found stranded and abandoned in the sea area “KATERGO”.

Early in the morning, the foreigners in question were taken by ship E/GO/G to the island of Ios. As a result of the preliminary investigation, it turned out that the aforementioned foreigners paid 10,000 euros each for transportation to Italy.