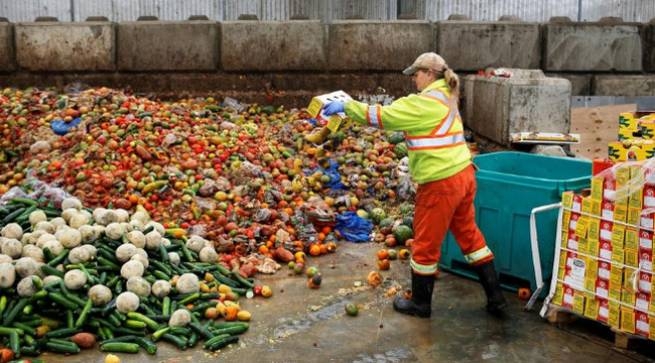 BB.LV says, citing the Guardian, that this is 153 million tons of food per year, while a staggering figure of 15 million tons exceeds the volume of imports and twice as much as previously thought.

Concerned activists point out that the EU needs to halve food waste by 2030 in order to improve food security and cope with the climate crisis.

The results of the latest study, writes BB.LV, show that European countries throw away more food than they import. Scientists have proven that by reducing the amount of waste, food price inflation can be curbed. The amount of ejected EU wheat, for example, accounts for approximately 50% of Ukrainian exports and 25% of exports of other grains from the European Union. Frank Mehilsen, co-author of the new study and director of the Feedback EU project, says:

“Against the background of high food prices and an unprecedented cost of living, it is simply a scandal that the EU throws away more food than it imports. Now is the perfect opportunity for the EU to set legally binding targets and cut food waste in half on the way from farm to table by 2030 to combat climate change and improve food security.”

According to data from the UN Food and Agriculture Organization (FAO), last month world food prices were 8% higher than a year ago, which was largely facilitated by the war in Ukraine. Prices for wheat, corn and soybeans this year even broke records that were set at the height of the 2008 global financial crisis.

Abdolreza Abbassian, a former FAO Senior Economist and Grain Market Analyst, is confident that the era of cheap food is over and prices are likely to remain inflated even after the Russian-Ukrainian conflict ends:

“Due to the situation in the energy and fertilizer markets, the growing uncertainty around the world, including in the field of transport and supply, not to mention climate change, we must admit that we are unlikely to see food prices from a decade ago again, to which you have become accustomed.”

“Reducing waste is going to be expensive at both ends of the food chain: it’s generally profitable to sell people more food than they actually need. Also, expiration dates themselves push people to buy more than they can consume.”

“All EU countries have committed to halving food waste as part of the UN’s sustainable development goals. However, almost a decade later, they have achieved very modest results, and our economy still generates a huge amount of food waste.”

The Bureau calls for action at the legislative level to reduce food waste throughout the supply chain: production, processing and food service. For 2020, official data on food waste on European farms has not yet been published, but the new study took into account calculations of the UN Environment Food Waste Index and the WWF 2021 meta-study.

In primary production alone, food waste is estimated at 90 million tons, three times more than household waste. And if we take into account that a significant part of them are probably not registered? EU statistics do not take into account food that is not harvested from the fields, unused and unsold.

According to various estimates, the EU countries annually throw away up to 20% of food produced, which costs businesses and households 143 billion euros per year. Food waste also accounts for at least 6% of total greenhouse gas emissions.

Trade in wheat and corn will only partly alleviate global food shortages from the conflict in Ukraine, and only at the expense of rising carbon emissions, another study published Monday in the journal Nature Food showed. The same study predicts that prices for corn and wheat will increase by 4.6% and 7.2% next year.