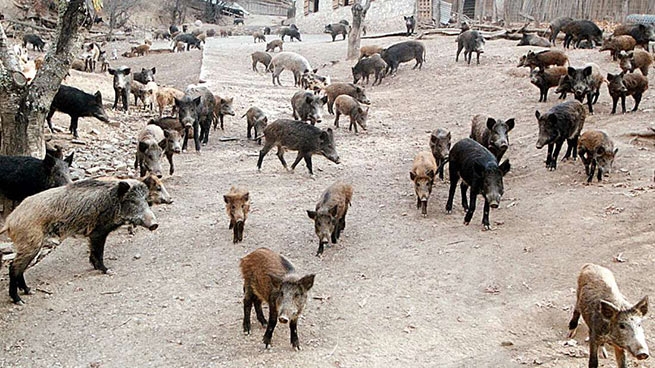 The city of Thessaloniki is besieged by thousands of wild boars, their number reaches 9,000-10,000 in the vicinity of the city. There is nothing the forestry and veterinary services can do, said the mayor of the Neapolis-Sikeon (Νεάπολη-Συκιές) district, Simos Daniilidis.

“These figures are appalling, and if we take into account the rate of their reproduction, then in 2-3 years they will take over the entire territory. We must take immediate, radical and effective measures,” he added.

To resolve this issue, a wide meeting was held, convened by the Inspectorate for the Implementation of the Forest Policy of Macedonia-Trace, with the participation of representatives of the municipalities, the region of Central Macedonia, the department of forestry and fire protection.

What exactly is going on? The same is happening with wild boars all over Greece: At some point, wild pigs came into contact with domestic pigs on farms in Northern Greece, where domestic pigs are at large within farm boundaries.

From this hybrid, a feral pig litter, which previously was 3-4 pups, now amounts to 6-8 and even 10 pups.

That is how much a female wild boar gives birth at the present time. Combined with the ban on hunting them, wild boars have spread intensively throughout Greece, where they are now the dominant species in the forest…

Previously, almost never found in the vicinity of Athens, wild boars filled the forests around the capital. According to forest guard workers, wild boars actively compete even with wolves, which have bred a lot in the Parnita region in recent years, not to mention red deer, to which wild boars are direct competitors.

Wild boars in the Athens district of Haidari.

Wild boars in the suburbs of Ekali