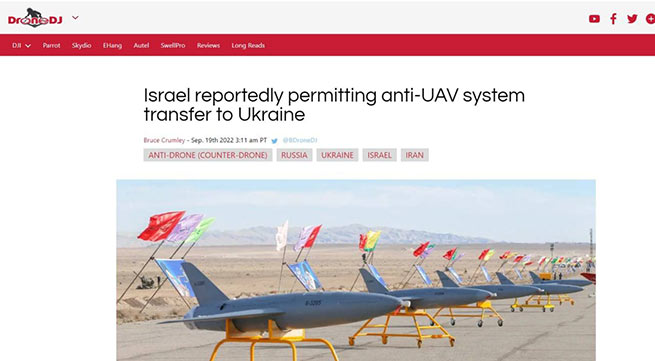 The US Congress asks the Pentagon to speed up consideration of the issue of the transfer of “large” drones to Ukraine, – Reuters. Israel will give Ukraine anti-drones to fight Iranian kamikaze drones.

Earlier, a plan to sell advanced unmanned aerial systems to Ukraine stalled over fears that the drones could fall into enemy hands, Reuters reported. Seventeen U.S. congressmen have asked Defense Secretary Lloyd Austin to expedite the Pentagon’s review of Ukraine’s request for large combat unmanned aerial vehicles, according to a letter sent Wednesday and seen by the agency.

The Biden administration’s plan to supply Ukraine with four large combat drones in June stalled over fears that the technically sophisticated equipment would end up in the possession of the Russian military. This was previously reported by Reuters sources. The technical objection to the sale was raised by the Defense Technology Protection Administration, a group within the Department of Defense that is responsible for protecting high-value military technology from adversaries, the sources said.

Earlier, the plan to sell the MQ-1C Gray Eagle drones, which was first revealed in March, was approved by officials, three sources said. “A thorough risk assessment should not be done at the expense of Ukrainian lives,” said a letter signed by a bipartisan congressional group that called for consideration of the drone transfer to be completed “in a timely manner.”

The letter, signed by both Republicans and Democrats, speaks of Ukraine’s recent victories and adds that “the use of more effective unmanned aerial systems on the battlefield will allow the Ukrainian Armed Forces to better defend the territory for which they fought so hard.”

Israel will give Ukraine anti-drones to fight drones. They can be used to deal with Iranian drones, which have become a problem – they are difficult to detect by air defenses due to their small size and low altitude. About it informs The Times of Israel.

According to Israeli media, an unnamed defense company is planning to supply an anti-UAV system to Ukraine through an intermediary in Poland. It is clarified that we are talking about anti-drones capable of resisting the Iranian UAVs delivered to the Russian Federation. Iranian drones are distinguished by their small size and the ability to fly at low altitudes, which makes them “invisible” to air defense.