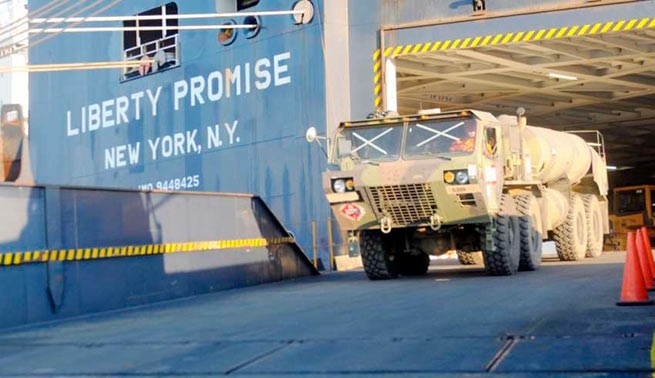 The port of Alexandroupolis in northeastern Greece has acquired strategic importance as Washington, distrustful of Turkey, relocated its military bases to Greek territory.

The cold snap between Turkey and the United States began in 2016, when the United States supported Fethullah Gülenawho led the coup attempt against Erdogan. The answer was the purchase of the S-400 air defense system from Russia. After that, the United States froze the F-35 program and began curtailing military contacts with Turkey, leaving, however, on the territory of this country a large military base in Incirlik, where the US Air Force has a 5,000-strong contingent, mainly as part of the 39th base wing of the 3- th Air Force of the US Air Force Command in Europe and Africa. Also on this base until the near future were stored 50 B61 fusion bombs.

Instead of Turkey, the United States staked on Greece, where, after the conclusion defense agreement in fact, all the country’s military bases were transferred to the joint use of the Pentagon.

Alexandroupolis is an important delivery point for military equipment to Eastern Europe and Ukraine, and a strategically important location for the diversification of European energy sources. It is located in the extreme northeast of the country, 18 miles west of the Turkish border and 30 miles south of Bulgaria.

Over the past three years, the United States and Greece have signed agreements to strengthen their defense cooperation and to guarantee “unrestricted access” to a number of Greek military bases. Among them is the object of the Greek armed forces in Alexandroupolis. Since this collaboration began, the port has faced unusually high traffic in warships. So much so that when 1,500 Marines from the USS Arlington docked in May, the city’s 57,000 residents faced a shortage of some productssuch as eggs and tobacco.

“The port can accommodate ships up to 650 feet long. Its proximity to the newly improved road network and connection to the railways make it one of the most important ports in Greece,” explains Lieutenant General of the Reserve Ilias Leontaris. “The US asked Greece to include Alexandroupolis in the list of areas where the Americans will be present, because this port allows them to easily transfer forces and materials to Eastern Europe.”

Unloading US military equipment in the port of Alexandroupoli.

The Americans made certain improvements to the port, aimed at facilitating the loading and unloading of materials. In 2021 alone, the US military moved 3,100 pieces of military equipment through it, according to official sources cited by The New York Times. These sources did not specify the type of military materials, but assured the Times that they were all destined for US bases in Europe. This year, more than 2,400 pieces passed through the port until July. According to the Greek newspaper Kathimerini, the Bushmaster protected mobile vehicles sent by Australia to Ukraine were also unloaded at the port of Alexandroupolis.

The deployment of US troops in Alexandroupolis did not go unnoticed by Moscow. Back in January, the Kremlin accused Washington of sending arms to Kyiv via a Greek port. 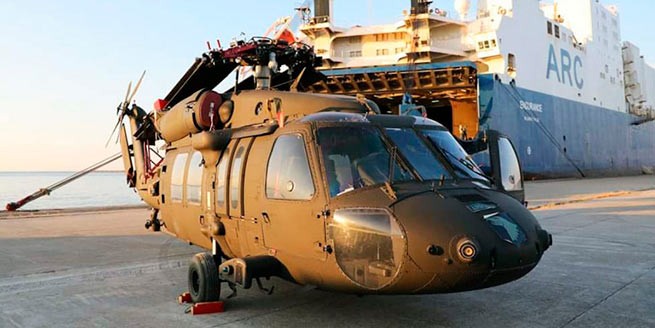 Unloading US military helicopters in the port of Alexandroupoli.

“Alexandroupoli is the gateway to the Balkans and a corridor to Ukraine. As Turkey has become a less reliable ally, it is necessary to have an alternative route that can be activated,” says Georgios Theoharis, a former Greek minister and MP from the right-wing New Democracy party. Thus the port of Alexandroupolis has become a coveted geopolitical object now that its management is offered to the highest bidder.

Not everyone in Greece likes the transformation of Greece into a US military base aimed at Russia. Members of the Communist Party of Greece (KKE) and the Communist Youth (CNE) blocked a train carrying US-NATO military equipment and combat vehicles at the exit from the port of Alexandroupoli.

April 2022 Greek railway workers sabotaged the departure of trains with US military equipment from Thessaloniki. “No participation of our country in military conflicts in Ukraine, which are committed in the interests of the few at the expense of the peoples. In particular, we demand that our country’s railway rolling stock not be used to transfer the US-NATO arsenal to neighboring countries.“, – publishes a statement of the radio trade union 902 Gr.

In exchange for successive financial aid packages that EU granted to Greece over the past decade, Brussels forced Athens to privatize numerous state assets, including the management of its ports.

By the deadline of Thursday 22 September, Greece received two binding bids for a majority stake in the port of Alexandroupoli. One is owned by Quintana, an American company with interests in the energy sector. The other is International Port Investments Alexandroupolis, a joint venture led by Greek construction company GEK Terna with US investment fund BlackSummit. Two other bidders with Russian ties – one owned by Savvidis, the other by the Cupeluso family, who are affiliated with the Russian energy company Gazprom – were ultimately expelled on political grounds.

“We are not going to hide that we have the support of the US government”, says Yannis Charalambakis, Managing Director of BlackSummit Financial Group. EL PAÍS has two sources claiming that US and European political representatives traveled to Greece to put pressure on the deal. “Greece is becoming an energy gateway to the EU. And we intend to use the port of Alexandroupolis and the port of Kavala [также недавно приватизированный] to advance Western interests in the axes of military security, energy security, food security – Alexandroupolis can export Ukrainian grain – and commercial security,” he said.

The recent decision on the port of Alexandroupolis will affect Athens’ relations with Washington and Moscow as successive Greek governments tried to maintain a policy of balance between the two powers. However, now Greece has finally broken with Russia and put it on the United States, in fact turning into a target for Russian nuclear missiles.

The Hellenic Republic Asset Development Fund (HRADF) announced on Thursday that it has received two offers to acquire 67% of the Alexandroupolis Port Authority (OLA). Offers were submitted under the following investment schemes (in alphabetical order):