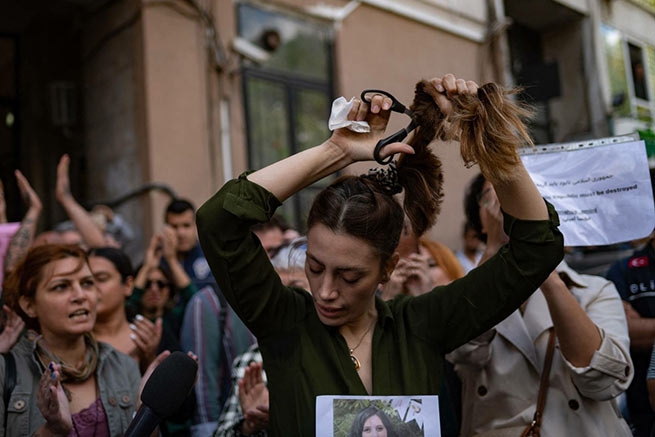 Riots in Iran sparked by the death of a girl after being detained by the vice police because of the hijab have killed at least eight people, including two law enforcement officers. The country has limited access to social networks and the Internet. In protest, women burn hijabs and cut off their hair.

Protests in Iran that lasted several days turned into riots. The demonstrations began after the death of 22-year-old student Mahsa Amini, who was detained by the vice police for wearing the hijab incorrectly.

Some believe that Mahsa Amini was beaten. The international press writes that such a case in Iran is far from the first.

The whole country is already engulfed in riots.

Representatives of the feminist movement of the Islamic Republic began protests, which have now spread to dozens of cities from the north to the south of the country – almost the entire Iranian opposition has taken to the streets. In Tehran, a crowd beat up policemen at night, in Rasht, demonstrators overturned police cars and ambulances, in Neged they threw stones at police stations, in Kerman there were fights with firearms, in Gulistan, the rebels seized the municipal building, in Urmia they burned road infrastructure, in Tabriz, girls hijabs were burned en masse.

These women in #Iran‘s northern city of Sari are dancing and burning their headscarves… anti-regime protests have now spread to dozens of cities from north to south, east to west… all triggered by the death of #MahsaAmini while in the custody of Iran’s morality police. pic.twitter.com/BBDvgC5L1w

To disperse the demonstrators, one of the main law enforcement agencies in the country, the Islamic Revolutionary Guard Corps, was involved. There are reports that the military open fire on the protesters. There are casualties – the dead and the wounded. One of them was a 10-year-old girl. According to preliminary data, she was hit in the head by a rubber bullet during the dispersal of the protesters.

OK world, This is what we are struggling with in our own country. and If you didn’t hear from us later, know that they cut our internet so that we can’t send our voice here! so help us to say her name, please!!!!
#مهسا_امینی #MahsaAmini pic.twitter.com/r6UnCZ8N7m

Started as women’s protests and student unrest, mass protests with street riots have grown in Iran after the death of Mahsa Amini. She was detained by the special morality police for wearing the hijab incorrectly. The girl was traveling with her family from Iran’s western province of Kurdistan to the capital Tehran to visit relatives. On the way, she was detained for “the wrong hijab.” According to one version, hair was visible from under the scarf, which is unacceptable according to Islamic standards. Amini’s family was told that she would be released after a “re-education session” with the police. A few hours after her arrest, she was brought to intensive care. She died without regaining consciousness.

International publications have reported that Iranian women have been detained for such “conversations” throughout the country for a month now. President Ibrahim Raisi on August 15 signed a decree banning secular women’s clothing and imposing harsher penalties for violating the strict code, even online. Women have been arrested across the country after July 12 was declared a national “hijab and chastity day”.

meanwhile in #Iran. With what they fought, they ran into something. pic.twitter.com/YnjBil3OPG

After the monarch was overthrown in the country in 1979 and a revolution took place, the state became an Islamic republic. By law, every woman must wear a hijab.

“There are special buses, they drive through the city, they control how women are dressed. If a woman is not dressed according to the norms, she is taken on a bus, taken to a special institution, lectured, her parents or husband are called, her clothes are cut with scissors. If a frequent violation, then she receives corporal punishment, a lash or pays a fine. I myself in Iran several times received remarks from women. There is a category for whom this is sacred, the norm of life. There are young people and other girls who want to dress like Europeans, in this respect they observe the hijab, but in their own way. A narrow coat, headscarves on top,” explains the head of the Eastern Cultural Center, Associate Professor at the Russian State Humanitarian University Lana Ravandi-Fadai.

There are many such girls, especially in the capital. Most likely, the deceased changed her hijab to a headscarf, counting on a secular attitude to this rule in Tehran. The Iranian President ordered an investigation into the circumstances of Amini’s death. The police officers involved in the case were detained and the head of the Iranian morality police was removed from office.

Meanwhile, political scientist Sergey Markov put forward a rather exotic version of these events: “In Iran, many believe that the protests were organized by the United States because Iran began to massively supply drones to Russia for use in hostilities in Ukraine…”

What’s happening in september in Iran , A thread 📌
Please pay attention and don’t underestimate the power of media. Be our voice.@UN pic.twitter.com/Fjlbza407C

This happens regularly in Iran, but the terror machine always wins.

The publicist Ostap Karmody urged opposition supporters not to be inspired by these events: “But do not rejoice ahead of time, this has already happened five times since the beginning of the century, and the authorities managed to hold on each time …”

Not too optimistic in his assessment of the Iranian events and network analyst Anatoly Nesmiyan: “President Ahmadinejad came to power in the middle of the 2000s. Technically, in Iran, the president is lower in the hierarchy than the Rahbar spiritual leader, but he still has certain administrative and even political powers of his own. Ahmadinejad was faced with a choice: either start opening up Iran, removing the most advanced principles based on the very mossy clerical dogmas of the deep Middle Ages, or, on the contrary, close the country even more and squeeze out an additional resource from the population for development and overcoming the existing distortions.

Ahmadinejad chose the latter. And in order to ensure a stricter regime of management and centralization of economic development, he granted the rights of an economic entity to the Islamic Revolutionary Guard Corps, transferring part of the export capacities to the IRGC.

During the reign of Ahmadinejad, the IRGC has become the largest owner, subjugating almost all the country’s export industries. (…) Everywhere the IRGC went, all internal conflicts were opened up and turned into one big catastrophe. On which the IRGC made money, intercepting funding from the Iranian budget for the continuation of endless wars.

Protests in solidarity and support for the Iranians are also taking place in Europe. In Germany, not only people from the Middle East – Kurdish and Iranian women – but also German ones took part in the demonstration.