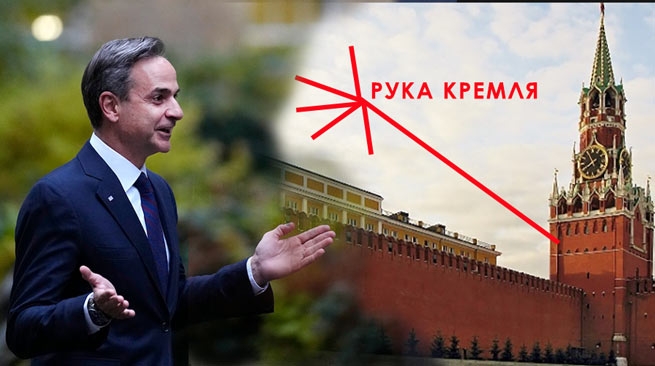 The topic of electoral interference is being actively discussed in the Greek media after statements by the incumbent Prime Minister Kyriakos Mitsotakis and his sister Dora Bakoyannis.

In his first statement on spying on the opposition, Prime Minister Kyriakos Mitsotakis hinted on the “dark forces outside of Greece who are working on plans to destabilize the country.” And although he did not name exactly who, in his opinion, is behind the “dark forces”, now he constantly hints at Russia.

His sister Dora Bakoyanni has also been active in the conspiracy theories that Megaro Maximo is now spreading, claiming in an interview with ANT1 that Greece is within the asymmetric threats that European countries receive from other countries, meaning Russia.

At the same time, as an argument, the deputy of New Democracy presented the reports of Kyriakos Mitsotakis at a press conference at the 86th TIF about 10 million euros, which “fell” into the accounts of the Greek media from Russia.

New Democracy previously issued a statement regarding a leaked U.S. service document alleging that Russia has transferred about $300 million to foreign political parties, politicians and officials in more than 24 countries since 2014 to influence international politics.

Against this background, the head of the Department of Internal Affairs K.O. SYRIZA-P.S. Kostas Zachariadis has taken a question to Interior Minister Makis Voridis, asking if the government accepts the circulating scenarios of Russia’s possible participation in the upcoming national elections in Greece. Referring to a report by a journalist from the Mega TV channel, he asked whether a meeting had been convened with officials from the electoral police department, whether the possibility of holding a nationwide election by electronic voting had been considered.

According to Mr. Zachariades, “The irresponsible dissemination of scenarios for the participation of foreign states in national elections creates an atmosphere of great concern and uncertainty among Greek citizens and enlivens the political scene, while at the same time exposing the country at the international level and creating serious problems and national risks.” He also points out that the practice of the ND government, throughout its time in power, but especially more recently in the matter of wiretapping, refers to the regime and the authoritarian logic of the right-wing faction of past decades. Interior Ministry sources claim that the issue of e-voting has never been raised, while G. Ikonomou has made similar denials.

It is noteworthy that this force was not Turkey, with which Greece has now developed extremely difficult relations, which, according to experts, are more connected with the elections in both countries than with the real reasons for the conflict, namely Russia, with which Greece, in Basically, there are no disputes and claims.

Edition news247.grbelieves that if Turkey is a “red rag” for rallying right-wing voters, then suspicions of Russian interference are directed at centristswho may consider returning to PASOK-KINAL due to wiretap revelations.

Avgi edition reminds of the “blue pro-Russian past” of New Democracy politicians. In the wake of the conspiracy theory, it is recalled that in September 2011, the then vice-president of New Democracy, Dimitris Avramopoulos, went to Moscow to consolidate the party’s twinning with United Russia. In close ideological affinity is Kyriakos Mitsotakis himself, who spoke passionately about the party of Vladimir Putin in 2019, when he visited Moscow as the official head of the opposition. “I believe that in me you will always find a reliable and trustworthy interlocutor,” he told State Duma Chairman Vyacheslav Volodin.

On this issue, the edition Pronews recalled the very witty publications of the agricultural party ΑΚΚΕΛ: “Another proof and external manifestation of the dependence of the Mitsotakis government, planted in our country, is the “discovery” of Kyriakos Mitsotakis and Dora Mitsotakis (no offense to Bakoyannis) that the Kremlin’s hand is preparing to interfere in the next elections. Having neither evidence nor facts, he again acts as an authority, repeating what was said about the United States and Trump, but it turned out to be fairy tales.

Is it possible in our time to dare to speak of any interference in elections or in the choice of ministers, metropolitans, archbishops, coming from anywhere other than the USA, Germany or England? So Mitsotakis and Dora take us for idiots? To run for prime minister, where have politicians been going for decades? They go to Washington to say that they are obedient children and to get the approval of the holders of Greece. Have you heard that someone is going to Moscow or St. Petersburg, Novorossiysk or Novosibirsk?

Who has been clearly spying against Greece and against Karamanlis lately, and only the Vodafone wiretapping scandal (after the murder) became public? Is the Russian embassy or the Chinese embassy located on Mavili Square? Which government were planted and trained State Department’s best Scientologists to advance US foreign policy?

How many leaders in this and past administrations are graduates of the American College and other institutions that shape perceptions and consciences consistent with American state and semi-state standards that the majority of the American people do not even express?

And to get to the bottom of elections and fraud that has been practiced for decades, how is it possible that the private company SingularLogic, with obvious dependency and influence from the government of the time, banking semi-states and foreign countries, even with the suicide of a major executive, is responsible for managing the results elections and their publication?

The question is not whether there were frauds, but how big or outrageously big they were. Even if we take into account the elections in which Karamanlis “lost” to Simitis, while he won by a wide margin until the very evening, then we come to the second case.

AKKEL expresses confidence that Mitsotakis is preparing a fraud and creating an “atmosphere”.

PS By the way, who remembers how the Kremlin’s interference in the US elections ended? Three years of work of prosecutors and the court, and the result is zilch. But who will tell me whether there was a trial and an investigation into election fraud, where Trump lost? Here’s something.