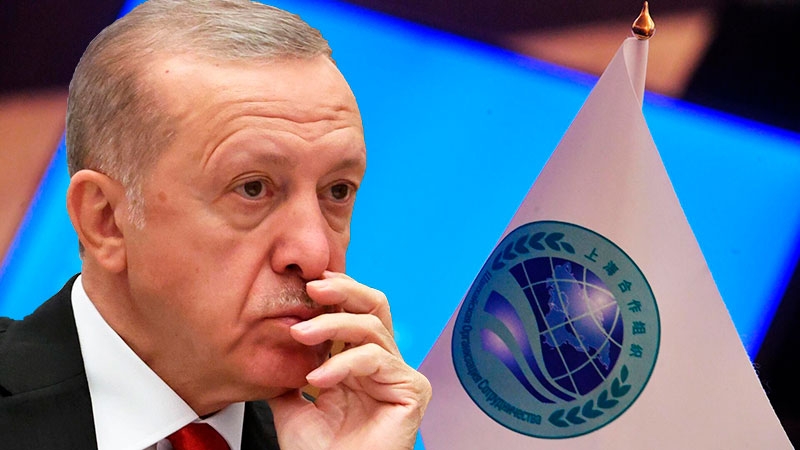 A source in the Russian Foreign Ministry told the Russian news agency RIA Novosti that “Turkey does not have to be a NATO member to join the Shanghai Cooperation Organization.”

The Shanghai Organization is turning into a military alliance and will become a rival to NATO. Therefore, the participation of Turkey, as a member of NATO, in its ranks is impossible, they say in the Russian Foreign Ministry.

Thus Russia is now incorporating the CSTO into the wider SCO scheme, which seems to already have secret defense protocols signed, while simultaneously raising the issue of vetoing Turkey’s membership over its NATO membership.

“For the sake of membership in the Shanghai Cooperation Organization (SCO), Turkey will be obliged to refuse to participate in such military blocs as the North Atlantic Alliance (NATO)”, – Bakhtiyor Khakimov, Special Envoy of the President of the Russian Federation for SCO Affairs, Ambassador-at-Large of the Russian Foreign Ministry, said RIA News. He also assured that the SCO will consider the Turkish application as soon as it arrives, but so far there has been no such initiative from Ankara.

In addition, Erdogan declared Turkey’s goal of joining the SCO. He announced the improvement of relations with the countries of the “Shanghai Five” when joining the organization and the formation of a “completely different position” for Turkey. According to him, the country aims to join the organization in 2023, at a summit to be held by India.

Germany says they are against Turkey’s participation in the SCO DW.

Turkey’s intention to become a full member of the Shanghai Cooperation Organization, which President Recep Tayyip Erdogan announced on September 17 following the SCO summit in Samarkand, should not remain without consequences, the speaker for foreign policy issues of the Soyuz 90 party believes https://rua.gr/ “Greens” in the Bundestag Jürgen Trittin (Jürgen Trittin). “Since it is impossible to exclude a single country from NATO, one should think about coercive measures of an economic nature,” the German politician said. in an interview with WELT newspaperpublished in the issue of Monday 19 September. “NATO and the EU need to wonder how much longer they are going to let Erdogan lead them by the nose,” he stressed.

At the same time, Ankara’s plans for in-depth cooperation with Russia and China within the framework of the SCO are just one of the points that Trittin considers unacceptable. No less outrageous, from his point of view, is the fact that “Turkey is obstructing NATO’s control over compliance with the arms embargo on Libya” and “drilling (oil wells. – Ed.) in the economic zone of Greece”.

“NATO member Turkey is doing more so that Russia can circumvent European sanctions than China. Erdogan is slowing down the process of Finland and Sweden joining NATO. And now she is going to join the SCO together with Iran (Iran signed a memorandum on joining the SCO on September 15 2022. – Ed.),” continues the “green” politician. In his opinion, the answer to all this should be a “strong policy towards Turkey.”

Niels Schmid, foreign policy spokesman for the Social Democratic Party of Germany (SPD), which is part of the ruling coalition in Germany along with the Greens and the FDP, also criticizes Erdogan’s intention to make Turkey a member of the SCO: “From a foreign policy point of view, this would be further symbolic step away from the West and its values ​​is a grave political mistake for Turkey’s future.”

At the moment, Turkey has the status of “dialogue partner” with the SCO.

These countries, except Uzbekistan, were part of the Shanghai Five group, which was founded on April 26, 1996 in Shanghai. India and Pakistan joined the OSC as full members on June 9, 2017 at the summit in Astana (Kazakhstan). Along with India and China, Russia is creating the largest geopolitical entity on the planet.

Recall that the Collective Security Treaty Organization (CSTO) – intergovernmental military alliance, signed on May 15, 1992. After the collapse of the Soviet Union, the post-Soviet independent states of Armenia, Kazakhstan, Kyrgyzstan, Russia, Tajikistan and Uzbekistan signed a Collective Security Treaty (CST) on May 15, 1992 in Tashkent. Azerbaijan signed the agreement on September 24, 1993, Georgia on September 9, 1993, Belarus on December 31, 1993.

The treaty entered into force on April 20, 1994. It was designed for 5 years and could be extended. On April 2, 1999, the presidents of Armenia, Belarus, Kazakhstan, Kyrgyzstan, Russia and Tajikistan signed a protocol to extend the agreement for the next five-year period, but Azerbaijan, Georgia and Uzbekistan refused to extend the agreement. In the same year, Uzbekistan joined GUAM.

On December 2, 2004, the UN General Assembly adopted a resolution on granting the CSTO observer status in the UN General Assembly. On April 3, 2009, a representative of the CSTO secretariat stated that Iran could in the future receive the status of an observer country in the CSTO. On June 28, 2012, Tashkent sent a note notifying Uzbekistan of the suspension of Uzbekistan’s membership in the CSTO (officially suspended on December 19 of the same year).

Since 2005, Russia began to train personnel for the CSTO countries free of charge in its military educational institutions. In 2010, about 2.5 thousand servicemen from Kazakhstan, Belarus, Armenia, Tajikistan, Kyrgyzstan and Uzbekistan studied in the Russian Federation.