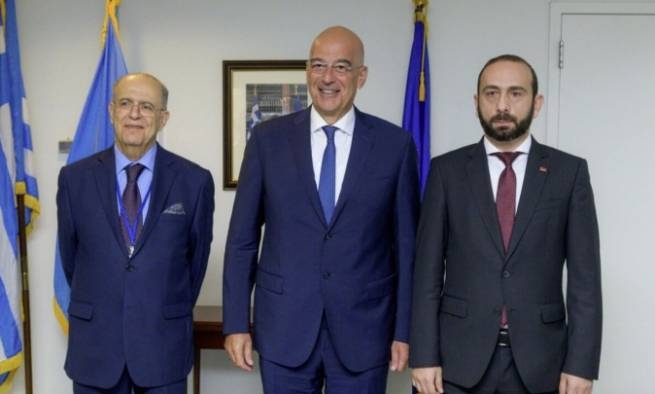 Foreign Minister Nikos Dendias expressed his deep satisfaction with the US decision to proceed with the lifting of the arms embargo against Cyprus. While in New York, the Greek Foreign Minister said:

“This is a reward for the consistent position of the Republic of Cyprus over the years.”

US Secretary of State Anthony Blinken on Friday lifted restrictions on defense trade in Cyprus for the 2023 fiscal year (in the US, it starts on October 1). Ned Price, the chief spokesman for the State Department, said in a statement quoted GreekReporter:

Price also explained that some legislative initiatives require Washington “at least once a year” to confirm that Nicosia “continues to work with the US government in efforts to implement reforms in the field of money laundering regulation and oversight of financial regulation.” In addition, the Secretary of State is required to certify legislators that “the government of the Republic of Cyprus has taken and continues to take the steps necessary to deny Russian ships access to ports for refueling and maintenance.” Only in this case, every year, American restrictions on trade in defense products will be lifted from Cyprus.

“I would like to take this opportunity to express my deepest satisfaction to Greece on the lifting of the arms embargo against the Republic of Cyprus. I think that (US Secretary of State) Anthony Blinken and Senators Menendez and Rubio also deserve thanks. But I would like to say which is actually a reward for the consistent position of the Republic of Cyprus over the years. The new perception that exists is total solidarity against any form of aggression.”

For the coming week, the head of the Greek Foreign Ministry has a schedule every day by the minute. On Monday, he noted:

“I will have more than 30 contacts, and if you take into account the large number of contacts that Prime Minister Mitsotakis will have, who is coming to New York tomorrow, then I think that in total we will have more than 40-45 meetings. I I think this is a great opportunity to deepen the relationship that we already have, as well as to explain to all our interlocutors the constructive role that Greece plays in its region – both in the Balkans and in the Eastern Mediterranean. And, of course, to advance the great national question Cyprus”.