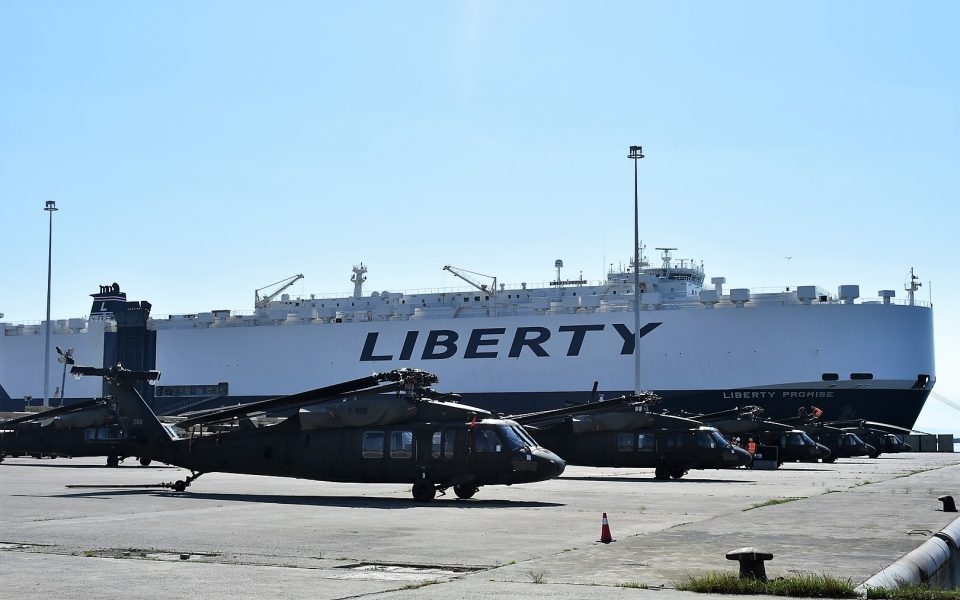 Since the beginning of the Russian war in Ukraine, thousands of American troops, tanks, helicopters and other equipment have been transferred to the eastern flank of NATO through the port of Alexandroupolis.

It is on its way to becoming a “second Court” that is acquiring a strategic character in the calculations and assessments of the US armed forces.

In the past nearly seven months since the beginning of the Russian invasion of Ukraine, the supply of troops and military equipment through Alexandroupoli has proven to be a viable alternative to the closed Bosphorus Strait, as evidenced by the thousands of soldiers, tanks, helicopters and other equipment of the United States and its satellites, which were quickly and efficiently transferred to the eastern NATO wing – from Bulgaria and Romania to Poland – through a point previously unknown to the vast majority of allies.

In the context of increasing the capacity of Alexandroupolis, the Americans have already proposed to Athens through various channels, but mainly through high-ranking military officials, further deepening of the port and expansion, perhaps even the creation of a new pier.

The goal – according to the Greek newspaper Kathimerini today – at the initial stage is to allow destroyers of the size and capabilities of the US Navy’s Arleigh Burke class to be docked and serviced from the port. They are the flagship of US naval strike power, carrying guided missiles and highly advanced electronic warfare (and therefore jamming) capabilities.

Destroyers of this size are, of course, already served by Souda, but talk of expanding and deepening the port of Alexandroupolis, on the other side of the Aegean, goes beyond a purely operational nature, i.e. building infrastructure in a region very close to the Black Sea and NATO’s eastern wing suggests an American desire to build a Balkan infrastructure network from the Aegean to Romania and from there to Hungary and Poland. In this context, of course, the possibilities of a reliable connection between Alexandroupoli and the Balkan mainland by rail and the strengthening of existing infrastructure, such as military fuel pipelines, are being discussed. The port of Kavala, which has already been transferred to the US military base, will undoubtedly become part of this system.

Sources familiar with previous discussions emphasized that if the port of Alexandroupoli becomes capable of receiving American destroyers, then in the long term, the possibility of temporarily receiving even larger units, in addition, of course, to huge transport vessels, should not be ruled out. that are already loading and unloading. In this direction, much will also depend on the speed of development of privatization procedures for the port of Alexandroupoli.

US involvement is not limited to Alexandroupoli. In recent months, the presence of US military forces in the Court has also increased dramatically. In addition to the continued presence of naval and air forces, there is ongoing discussion at the Court about upgrading infrastructure to accommodate increasingly complex systems. Whether it’s high-performance UAVs or fifth-generation aircraft like the F-35, the Americans seem to want to turn the Courts into a hub that will serve their entire military, both air and sea. Already the transfer to the Court of elements that until recently were permanently located at other bases in or outside Europe is evidence of this trend. The revamped Greece-US Defense Cooperation Agreement (MDCA) is serving as the basis for accelerating congressional procedures and large US spending to strengthen military infrastructure and bases.

In addition, the Russian invasion of Ukraine has increased the need for NATO and US surveillance of maritime space. In 2020, Congress allocated funds to deploy high-precision surface radar (Maritime Awareness Domain) throughout the Aegean Sea. This project has finally begun and is well underway, expanding the ability to monitor surface traffic in the Aegean for both NATO and the Greek armed forces. The Americans, of course, want to improve their surveillance of the sea in order to have a clearer operational picture of the movements of Russian naval units, which are still active throughout the Eastern Mediterranean.

Obviously, this imaginary arc that starts from Alexandroupoli, crosses the Aegean Sea and reaches Crete, is perceived by the Americans as a single operational space, and they want to strengthen their presence not only in terms of forces, but also in terms of infrastructure. This image is reinforced by the addition of the US presence at the Larissa airbase, which is essentially being refurbished to be able to serve UAVs and flying tankers on a more permanent basis over time.

It is also clear that, in addition to the operational aspect that this increased US presence in Alexandroupolis and the Court has, it also has a huge political significance. In fact, this is a mobilization, which at the level of the alliance is perceived as an attempt by Washington to protect itself from the instability prevailing in the region as a whole. The very next day after the coup attempt in Turkey and open hostility towards American troops at the key Incirlik base in Washington, quiet but substantive discussions began about the role of Recep Tayyip Erdogan’s Ankara in NATO. This geopolitical dimension of the increased US presence in Greece has certainly not gone unnoticed by Ankara, which has been sending an almost monotonous signal of growing annoyance over Athens’ alleged instrumental use of Turkey in the Western plan to “weaken” it in recent months.

Gradually withdrawing from Turkey, the US is increasingly turning Greece into its military base directed against Russia. And along with this, the anti-Russian rhetoric of the Greek leadership is growing stronger. That’s just the quality of life of the Greeks from this “joy” for some reason falls. They probably do not understand how their faithful allies have benefited them …